Sexual abuse in Thailand’s schools has long been a challenge. In a roundtable discussion, teachers and advocates for sexual abuse survivors share their views on the issue.

n November 2020, a picture of a girl went viral on social media.  She was standing among a crowd, wearing a student uniform, her lips were taped shut, and she was holding a sign saying “I was abused by a teacher. School is not a safe place.”

The photo was taken at a protest organized by the education reform activist group Bad Student. After it was released, the photo generated a public discussion about sexual abuse in schools.

Five months later, the Facebook page “อยากดังเดี๋ยวจัดให้ รีเทริน์ part 3” (translated as “If you want to be famous, I can do it for you, Return, Part 3”) revealed that a girl at a Samut Prakan school was sexually abused by her teacher.

These are only two of the many cases of sexual abuse in schools covered by the media. Many remain unreported.

Estimates from the tenth panel discussion, “Problems or Lust: Good Governance and Sex in Thai Schools” organized by Chulalongkorn University in 2018, show sexual abuse in school occurs every year, but only 5% is publicly reported.

Watcharamon (last name withheld for security reasons), teaches at a girls’ school in Bang Rak District, Bangkok. She says that awareness of sexual abuse is a key factor in solving the problem in schools in Thailand.

She explained that a person’s lack of awareness comes from the habit of perceiving sexual abuse as normal or as a joke, and the education system rarely teaches people to be aware of their own rights. Women are taught to be patient, and, if they are abused, that they are guilty for not being careful.

Orawee Yafu, a social worker at The Hug Project, a non-governmental organization that helps victims of child sexual abuse, said that one of the factors that contribute to sexual abuse in an educational institution is the educators’ lack of understanding of abuse or sexual violence.

“They are still not aware of their students being abused in their own schools. Sometimes they still put their reputation first and do not look at how much the students are harmed or abused,” said Orawee.

Boonpitag Chairangsi, another social worker at The Hug Project, said that most successful cases, where the survivors receive appropriate remedies and are able to return to normal life, are assisted by their schools.

When sexual abuse occurs in a school, some schools will coordinate with related agencies to help the victims and punish the abusers. Some schools, however, choose to ignore the abuse or penalize the victims instead by expelling the latter, for instance, to maintain the school’s reputation.

“Reputation, once it goes bad, is hard to get back,” said Watcharamon.

Watcharamon said a school with a bad reputation will be targeted by the Educational Service Area that the school belongs to, with negative effects on the administrator’s managerial prospects. Most importantly, it affects students who will study there in the future.

Watcharamon said in the worst case, the abuser might be removed from teaching and transferred to work in the Ministry of Education. This disciplinary action is regarded as a severe penalty but not as severe as being fired. 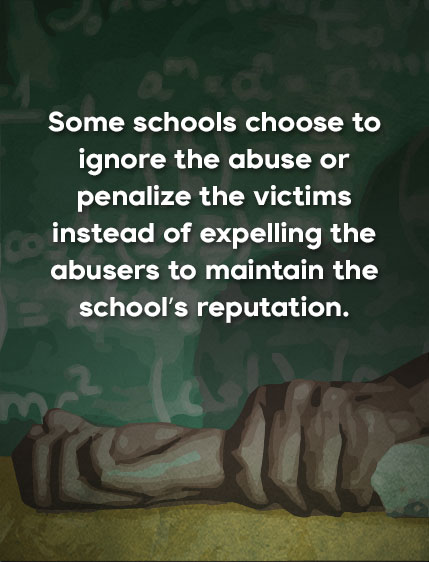 School is a second home

“As a case worker, I know that Thai schools have no policy to prevent sexual abuse in schools at all,” said Jomtien Jansomrag, an advocate for survivors of sexual abuse.

Jomtien said that the only mechanism that can be used to prosecute sexual abusers in the school system is the Code of Ethics of the Teaching Profession, established by the Teachers’ Council of Thailand (Khurusapha), which considers sexual abuse by teachers, whether against a student or a co-worker, a violation of the Code.

However, Watcharamon said the Code of Ethics cannot be used to inflict serious punishment on anyone in the education system, unless the unethical behavior of the teacher is also against the law, in which case they may get a severe penalty, such as dismissal.

In Thailand, only the schools run by the Catholic Church have a policy on sexual abuse. This policy concerns the pastoral care of minors and includes protection against sexual abuse in all church organizations. The policy is called “A Protocol of the Catholic Bishops’ Conference of Thailand (CBCT) for Addressing Sexual Abuse of Minors and Vulnerable Persons in the Church in Thailand.”

But Jomtien said Thai schools that are not connected to the Catholic Church are not able to help victims at all, as they have no connection with organizations that provide support for abuse victims and teachers often do not know how to seek outside help.

Thailand has laws to protect people who experience sexual abuse, whether indecent acts, harassment, or rape against children under 18. However, it is difficult for victims to go to the police.

While Thailand has laws to protect people who experience sexual abuse, Jomtien says a victim faces many problems when reporting the crime. The police might refuse to take the complaint, or let them file only a “daily report,” which will not lead to an investigation unless the report is filed as a case, meaning that the report is intended as a complaint leading to the prosecution of the offender.

“Thai laws exist, but it’s like they don’t exist. They are just on paper,” said Jomtien.

Remedies for victims, penalties for offenders

In Jomtien’s experience, not a single case she worked on achieved a legal remedy. However, she said that supporting a case goes beyond the courtroom and that each case has different needs. Some victims may simply want the abuse to stop, and some may just want someone to talk to. It is not necessary, she said, for survivors to force themselves to go to the police or participate in a system that always results in secondary victimization.

According to the European Institute for Gender Equality, secondary victimization is a term used when the victims suffer further trauma due to the way in which institutions and other people respond to them after they have been the victim of a criminal act. This may be caused by repeated questioning about the same facts, the use of inappropriate language, insensitive comments made by people who contact them, etc.

Jomtien adds that while there are victims who are compensated with a small amount of money, in other cases, they get nothing.

“If the abuser has no money to pay, it’s just a piece of paper with digits,” said Boonpitag

And in cases where the abuser was actually sentenced to prison, the punishment meted out was not commensurate with the abuse suffered by the victims.

Female police play a crucial role in the prosecution of sexual offenses. Boonpitag shares that female victims tend to be more comfortable when providing sexual information to other women. And female police tend to understand sensitive topics better than males.

However, Jomtien said that the lack of female officers contributed to the difficulty of reporting and tackling sexual violence, as Thailand currently has a shortage of women officers due to low salaries and non-existent career paths.

A female police officer they spoke to revealed that people rarely want the job, because of the hard work. They are also forced to work like their male counterparts, including insensitively questioning the victim, just to gain acceptance.

Thai norms as obstruction of justice

Watcharamon added that different school societies can affect the behavior of teachers, and she sees that sexual abuse is more likely to occur in co-education schools than in all-girl schools.

Authoritarianism also affects the teacher’s behavior in another way as seen by their reaction when sexual abuse occurs. Jomtien shares that the reason why other teachers do not want to help when students are abused is that they are afraid of being targeted by those in positions of authority in their school.

However, this counteraction still causes problems. The use of authority to fight each other in the justice process does not improve the laws or system that is the problem. Instead, it reinforces the continuation of hierarchy in society.

Besides authority, religion is one of the significant factors that play a role in sexual abuse cases in Thailand. Thai society often brings in Buddhism to justify injustice and irrationality in the social system by using a law that people believe is reasonable like the “law of karma.”

Jomtien said that because people cannot rely on any secular law, they try to comfort victims with religious beliefs, such as that abusers will eventually have to pay for their crimes in their future lives.

These characteristics have dominated people’s minds for a long time and finally developed into another culture called “victim blaming,” inducing in the victim self-critical behavior and a fear of reporting the abusers.

Watcharamon believes it is possible for Thailand to solve the problem, as people are more aware of sexual abuse today. Even though it might be impossible to change everyone in 10 years, being aware is a good sign towards a solution.

Orawee suggested that teacher training programs should include lessons on child abuse awareness and student-centered learning for all teachers to learn before they start work.

Boonpitag said the schools or the Ministry of Education should be responsible for educating students about sexual abuse, creating more channels for reporting abuse, protecting the victims, and ensuring their safety after reporting.

Jomtien said, “I believe that real democracy will make the right to fight against sexual violence more effective and more democratic.” ●

This article was first published by Prachatai on Sept. 1, 2022. This excerpt is being republished here by the Asia Democracy Chronicles with permission. To read the full article, please follow this link.