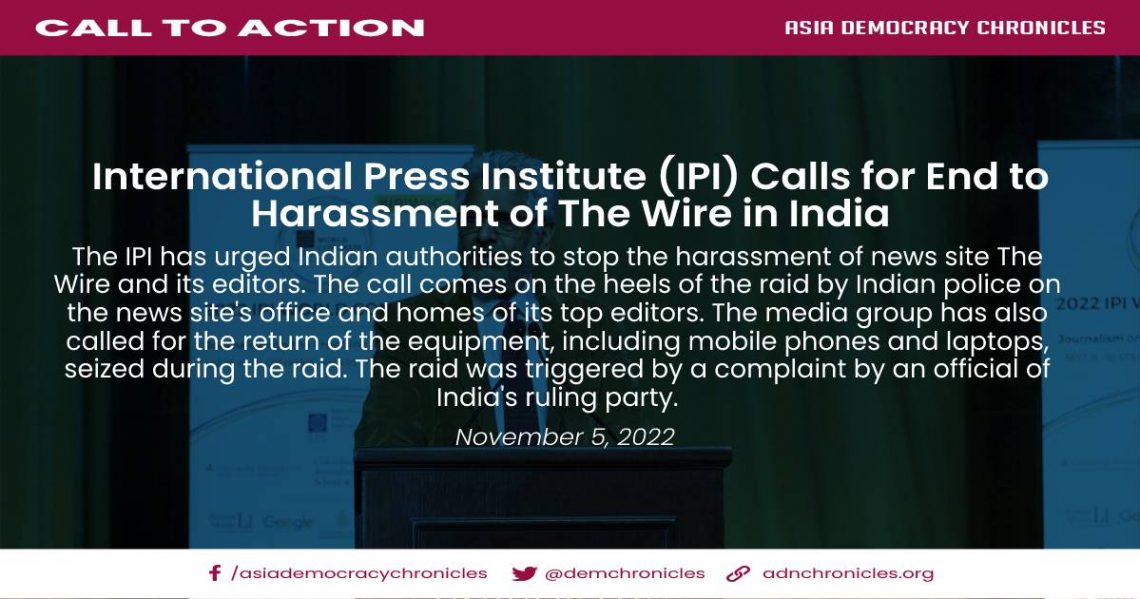 The IPI global network condemns the raid by Indian police on top editors at the Indian news site The Wire after a complaint by a communications offical of Indian’s ruling party.

On October 31 police in Delhi searched the homes of The Wire editors Siddharth Varadarajan, MK Venu, Sidharth Bhatia, and Jahnavi Sen as well as at The Wire’s offices. The police seized several mobile phones and laptops belonging to the editors.

The raids are in connection with a news report published by The Wire earlier this month claiming that Amit Malviya, the head of social media for India’s ruling BJP party, had a special arrangement with the social network company Meta under which Meta would remove content upon the BJP’s request. The Wire’s report was later found to be incorrect and based on fabricated documents and the news site later retracted it. It issued an apology to its readers and said it would be conducting a comprehensive review of its editorial processes. Malviya later filed a complaint against the paper’s editors for defamation and forgery, among other charges.

“Indian authorities must stop their harassment of The Wire and its editors and return all equipment seized”, he said. “The raids on the news site’s offices and the homes of its editors, as well as the confiscation of mobile phones and other devices which may contain sensitive information related to the journalists’ work, are disproportionate, excessive, and a violation of press freedom.”

“The Wire has already stated that its news reporting in this case was not accurate and has taken steps to address the issue. However, this controversy must not be used as an excuse to intimidate The Wire as one of India’s leading critical news sites.”

Media rights organizations in India have also condemned the raids. The Editors Guild of India said it was “extremely disturbed” by the raids, which it said were in “violation of established rules” and carried out in an “intimidatory manner”.