Vietnam-based NGOs perform a delicate balancing act to accommodate both their foreign donors and the Communist Party.

ai was just on her third day working for a Hanoi-based non-profit organization, when five local policemen in uniform suddenly stormed into the office.

When she and two of her colleagues asked what the unannounced visit was about, they got a piece of paper bearing the seal of the Hanoi police as a reply. All the electronic gadgets belonging to Mai and her two co-workers were confiscated; the police officers also asked for the password for each device.

In addition, all of the staff present that day were summoned to the local police station to report their detailed activities and responsibilities within the organization. Three days later, Mai — who, like all the nongovernmental organization (NGO) workers interviewed for this story, requested to be identified with a pseudonym — was asked to go and retrieve her devices at the police station. 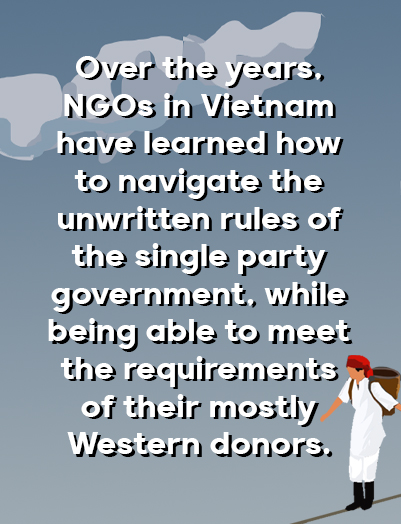 The police visit to Mai’s NGO came following the detention of the organization’s founder, who was eventually charged with tax evasion earlier this year, according to media reports. For years, this NGO had been working on human rights, particularly environmental issues. The arrest of its founder, however, marked its dissolution.

In the last several years, civic space has been shrinking in Vietnam. In its 2021 report on civil societies across the world CIVICUS, a South Africa-based alliance, even ranked Vietnam, along with China, Laos, and North Korea, as “closed.”

Yet, at the same time, there has been an increasing number of NGOs based in Vietnam. Many registered and unregistered organizations and networks in this Communist-ruled country of 100 million people have apparently become adept in executing a balancing act just so they can continue their work. Over the years, they have learned how to navigate the unwritten rules of the single-party government, while being able to meet the requirements of their mostly Western donors.

There are, of course, some NGOs that eventually fall off the wire, such as Mai’s organization. According to Mai, her colleagues had attributed the founder’s arrest not to “tax evasion,” but to the NGO’s unwillingness to take care of relationships with local police. Put another way, the organization never gave “gifts” to authorities.

Many observers believe that tax evasion is often a trumped-up charge that targets activists in particular. Several NGOs and their officials in fact have recently been charged with tax evasion. Among them was prominent green activist Nguỵ Thị Khanh, who in 2018 became the first Vietnamese to win the prestigious Goldman Prize. But as one Hanoi-based human-rights researcher commented, “The tax law is so vague that almost everyone can be charged with this.”

By and large, for the Vietnamese government, an NGO is not distinguishable from a business and has to pay taxes on the funds that they receive, mostly from abroad. In truth, there is no clear definition of “not-for-profit organization” or NPO in Vietnam. Still, according to Decree No. 116/2013/ND-CP issued on October 4, 2013 and Decree No. 93/2019/ND-CP issued on November 25, 2019, “NPOs” are defined as corporate bodies or entities mainly operating to raise funds for charitable, religious, cultural, educational, social, or similar purposes.  “Not-for-profit purposes” are defined as the non-pursuit of profits for sharing, and the use of all profits earned in the course of operations for state-approved activities.

National nongovernmental organizations in Vietnam are not entirely “nongovernmental,” though. To function as an NGO, an organization must be affiliated with a state agency. For example, the Institute for Studies of Society, Economy and Environment (iSEE), whose mission is to promote the rights of minority groups, was registered under the Vietnam Union of Science and Technology Associations (VUSTA). The Institute Management and Sustainable Development Institute (MSD Vietnam) was established as part of the state-administered Vietnamese Association for Southeast Asian Studies.  The Vietnamese Red Cross Society, while being a member of the International Red Cross and Red Crescent Movement, is legally part of the National Fatherland Front, a state-funded mass organization.

Most NGOs, however, depend on funding from foreign governments, foundations, and companies for their operations. According to the book Vietnam: A Rising Dragon by former BBC journalist Bill Hayton, 80% of sponsorship for the NGO sector is foreign cash.  All NGO workers interviewed for this article also asserted that their affiliated NGOs have always depended on funding from international governmental and non-governmental organizations.

Such funds come with rules and regulations that are often difficult to meet in Vietnam. While bribing local authorities to obtain permits is not uncommon in Vietnam, the practice is frowned upon by the NGOs’ foreign funders. Yet, without facilitation payment, a project would be delayed or even disapproved — which would not make the NGO’s international sponsors happy.

The price for “good relations”

In an attempt to deal with this dilemma, some NGOs resort to paying the “relationship fees” out of their own pockets. Vy, who worked in the field of sexual and reproductive health in Hanoi, recalled that whenever her NGO applied for local permits, its representative would often submit a portfolio that included an envelope containing anywhere from VND 200,000 (US$9) to VND 500,000 (US$23) to the civil servant receiving the application. The amount depended on the scale of the project, said Vy; it was never included in the reports to the foreign sponsors.

Meetings with representatives of local state agencies were also needed for projects to be implemented. Said Vy: “They would not have a meeting without receiving gifts from us.” These “gifts” were also excluded in the reports to the foreign funders.

But Ho Chi Minh-based social worker Linh said that her environmental NGO has managed to stick to the transparency rule required by its European, U.S., and Japanese funders by outsourcing to an event agency tasks that have to do with local authorities.

According to Linh, her NGO learned a hard lesson in the past. Its application for a foreign-funded project was pending for a year, which made the sponsors unhappy. Application evaluators would complain that certain documents were missing, or some documents were not clear. But the NGO never received a comprehensive response as to what would constitute a complete application.

“They never allowed us to have the chance to dialogue with them,” said Linh.

In the end, Linh’s NGO could not obtain the permit within the timeframe required by a European funder; the three-year project that was poised to receive US$1 million in funding was cancelled.

But successfully securing a permit does not necessarily mean no more headaches for NGOs either. In many cases, they would still need to watch their step should they, say, want to hold an event with foreign speakers or guests.

Hương, who is with a nongovernment research institute in Hanoi that often organizes knowledge sharing events with international scholars, said that while they know how to self-censor politically sensitive topics, such as the Russian war on Ukraine, there are subtle things they have to learn along the way to avoid having their permit application rejected or paying a hefty fine. For example, she said, before they invite a speaker, they have to make sure that the speaker has no record of saying things that do not toe the Party line.

“Sometimes,” said Hương, “we even ask speakers to submit their presentation script, if possible.”

Also, she added, some common rules need to be observed. For example, foreign speakers have to use maps that include Paracels and Spratly islands that Vietnam claims sovereignty over — along with neighboring countries, including China — in the South China Sea.

Independent activist Giang, for her part, said that one needs to be cautious about framing every internationally sponsored program. NGOs have to soften their language or frame their projects carefully so as not to ruffle the feathers of local authorities.

“For example,” said Giang, “terms such as transparency, pluralism, or democracy need to be kept at a minimum, because they can come off as challenging Party leaders.”

And while foreign funders usually require publicity for sponsored events, NGOs negotiate to make these low-profile so they can stay below the radar of local authorities.

The wariness is warranted. Now and then, there are domestic media reports on civil society organizations supposedly engaging in rhetoric that spreads  “anti-Party and anti-State propaganda.” It is also quite common for civil-society organizations to be depicted as hostile forces masquerading as peaceful groups for development.

Constant surveillance is a given as well. Anh, a country coordinator of the international NGO based in Hanoi, said that her organization’s field trips to provinces in Vietnam are always monitored by local authorities, albeit “secretly.”

According to Anh, it is not difficult to recognize the “watchers.” She said that in meetings and training sessions she conducted with local partners, there was always someone sitting silently, never bothering to make introductions or contributing to the discussions.

Once on a field trip with more than 12 participants, Anh noticed someone who, unlike the others, was not talking to anyone.

“I saw a woman sitting in a corner, always on her phone,” Anh said. “I asked other people who the person was. Nobody had an idea. One secretly told me that this person had been dispatched from above.”

When Anh initiated the conversation with the person, she did not seem to be interested and tried to evade Anh’s questions. But she did say simply that she was working for the archive department of the district, where the field trip was taking place.

“Why would the archive department have anything to do with my field trip?” wondered Anh. “The person must have been sent by the local authorities to monitor my activities, but they just do not do that openly.” •

Nguyện Công Bằng is an independent journalist who writes about Southeast Asia.