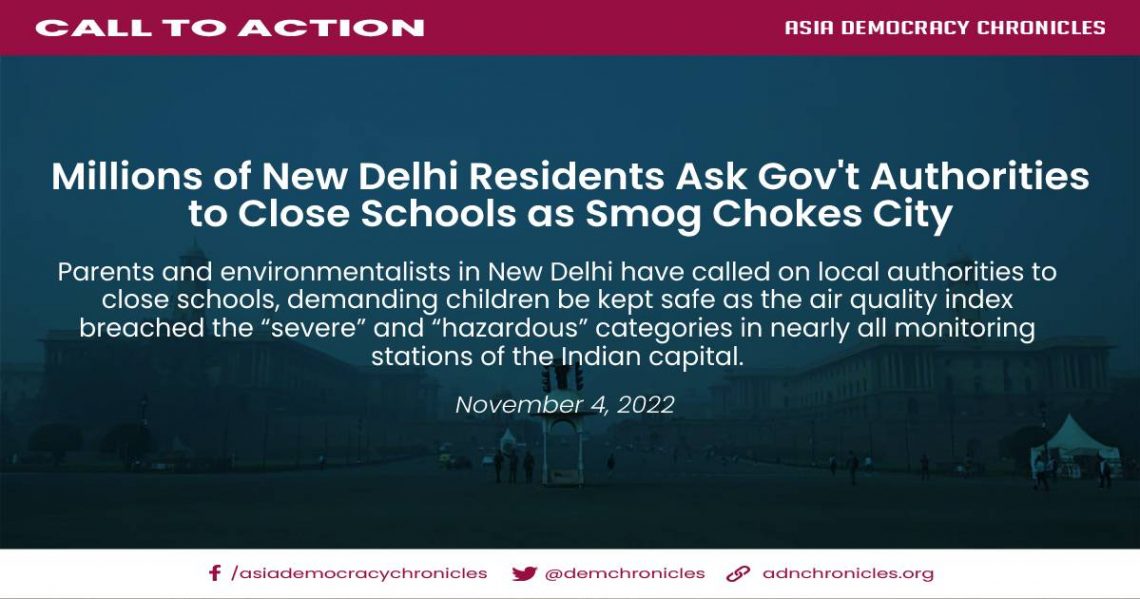 The AQI exceeded 450 at many places early in the day, according to data from the Central Pollution Control Board. A reading over 400 affects healthy people, with serious impacts on those with existing diseases, the federal government says.

The index was over 800 in some pockets of the city, according to data from the Delhi Pollution Control Committee.

“What is happening with air pollution in Delhi is nothing short of a crime against humanity!” author and socialite Suhel Seth wrote on Twitter. “There’s a total collapse of accountability!”

The world’s most polluted capital is blanketed in smog every winter as cold, heavy air traps construction dust, vehicle emissions and smoke from the burning of crop stubble in the neighbouring states to clear the fields for the next crop.

Lower temperatures, calmer winds and their changing direction worsen the air quality from time to time.

Parents and environmentalists on social media demanded schools to be closed.

“I know children don’t vote for you, but still, requesting all the chief ministers of Delhi (capital region) to immediately SHUTDOWN all the schools,” environmental activist Vimlendu Jha wrote on Twitter.

“It’s not NORMAL to breathe 500+ AQI, not for our children, where every third child already has some pulmonary challenge.”

Delhi Chief Minister Arvind Kejriwal, whose party also rules Punjab, where crop burning is rampant, said on Twitter that the “people of Punjab and Delhi are taking all steps at their level” to tackle pollution.

The capital this week stopped most construction and demolition work to curb dust pollution and appealed to residents to share car and motorcycle journeys, work from home when possible, and reduce the use of coal and firewood at home. REUTERS

How are trade relations between China and Germany on the eve of Olaf Scholz’s visit?