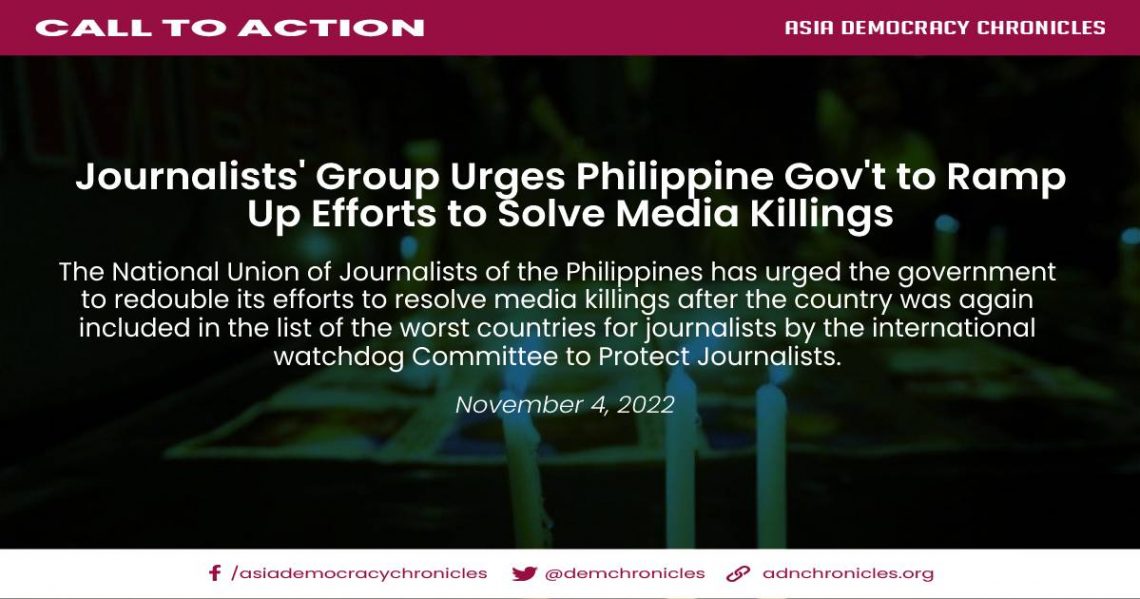 MANILA, Philippines — The National Union of Journalists of the Philippines (NUJP) yesterday urged the government to redouble its efforts to resolve media killings after the Philippines was again included in the list of the worst countries for journalists.

While it welcomes government initiatives to engage with journalists and look into their safety and security, the NUJP said the resolution of previous attacks and the assurance that threats are taken seriously “are among the best ways to ensure that we can report without fear of reprisal.”

“We hope that the CPJ findings are not dismissed as propaganda and will instead prompt the government to redouble efforts to solve the cases,” it added, referring to the New York-based press freedom watchdog Committee to Protect Journalists.

Aside from the killings, the NUJP earlier expressed concern over incidents of harassment and the police visits to the residences of some journalists.

The Philippines is one of six countries that have appeared every year in the index since CPJ launched it in 2008, along with Somalia, Iraq, Mexico, Pakistan and India.

Globally, CPJ said the situation remained dire as no one has been brought to justice in nearly 80 percent of the 263 cases of journalist killings that it monitored.

Even campus journalists have been targeted by the attacks against the media, according to the College Editors Guild of the Philippines (CEGP).

During its recent general assembly, CEGP said at least 30 student publications have experienced different forms of attack, including harassment, trolling and red-tagging.

It also noted various administrative intervention issues, such as meddling of advisers and defunding of publications.

The group reiterated its call for the passage of the Campus Press Freedom Bill, which seeks to address loopholes in the Campus Journalism Act of 1991.

Meanwhile, the United Nations Educational, Scientific and Cultural Organization (UNESCO) said journalists continue to be killed at an alarming rate, with more than 70 journalists killed this year alone, making 2022 the deadliest year since 2018.

UNESCO’s “2022 Report on the Safety of Journalists and the Danger of Impunity” revealed that 955 journalists have lost their lives over the past decade.

The report is a mechanism within the UN system for monitoring the killings of journalists. It is published every two years, making an occasion for member states to take stock of global developments, and discuss challenges linked to promoting the safety of journalists and combatting impunity. –  Pia Lee-Brago, Artemio Dumlao, Alexis Romero

How are trade relations between China and Germany on the eve of Olaf Scholz’s visit?