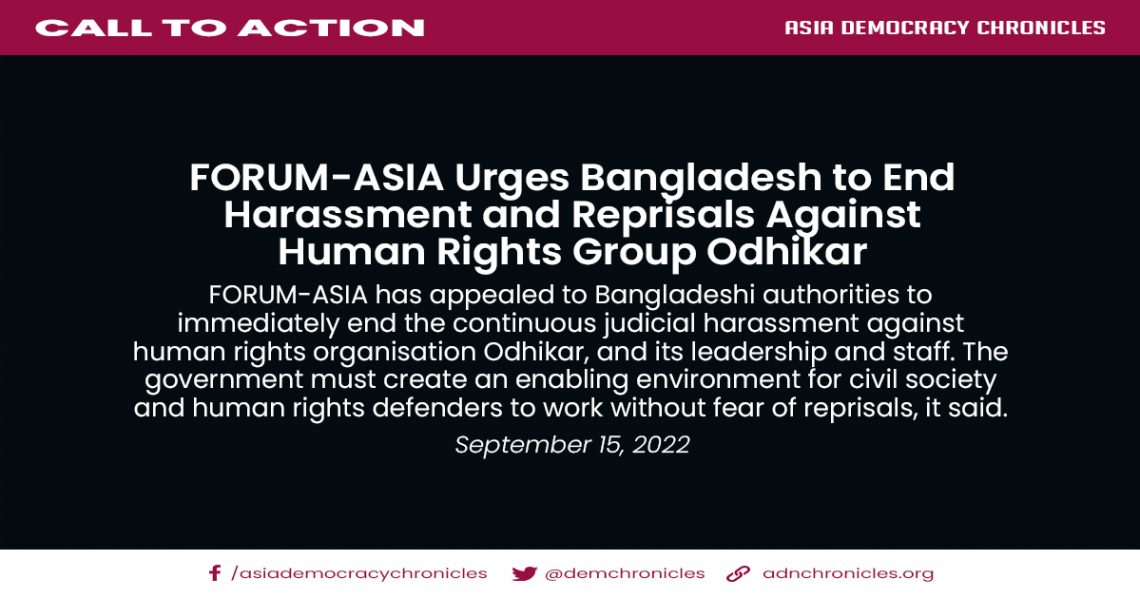 (Bangkok/Kathmandu, 14 September 2022) ‒ Bangladeshi authorities should put an immediate end to the continuous judicial harassment against human rights organisation Odhikar, and its leadership and staff. The government must urgently take the necessary steps towards creating an enabling environment for civil society and human rights defenders to work without fear of reprisals, said the Asian Forum for Human Rights and Development (FORUM-ASIA).

Odhikar, a prominent human rights organisation in Bangladesh and FORUM-ASIA member, had applied for renewal of its registration to the NGO Affairs Bureau (NGOAB) in 2014, as mandated under the then Foreign Donation (Voluntary Activities) Regulation Rules-1978. Eight years after the initial application, on 5 June 2022, the NGOAB refused to renew Odhikar’s registration for multiple reasons, including the publication of ‘misleading information’ about extrajudicial killings, and enforced disappearances which have ‘seriously tarnished the image of the state to the world’. After an appeal hearing on 3 August, the order from the Prime Minister’s Office upheld the decision to deregister Odhikar.

Odhikar’s Secretary Adilur Rahman Khan and Director ASM Nasiruddin Elan have also faced judicial harassment since May 2013. They were detained over a fact-finding report issued by Odhikar in 2013 on extra-judicial killings by security forces and law-enforcement agencies in Bangladesh. Khan and Elan spent 62 and 25 days respectively in arbitrary detention and were later released on bail. However, instead of dropping the case, the Dhaka Cyber Tribunal indicted them under sections 57 (1) and (2) of the Information and Communication Technology (ICT) Act, 2006 for publishing ‘fake, distorted and defamatory’ information. The two human rights defenders could face a minimum of seven and a maximum of 14 of imprisonment if convicted.

Last year on 14 February 2021, Odhikar’s appeal to drop the charges was rejected by the Appellate Division of the Bangladesh Supreme Court. Later in September 2021, the trial resumed and the examination of prosecution witnesses commenced. Khan and Elan appeared in the examination of witnesses at the Dhaka Cyber Tribunal as recently as 5 September 2022. The next hearing is fixed on 26 September.

‘Since 2013, Odhikar has been dealt blow after blow of undue surveillance, smear campaigns, and judicial harassment. This has severely hampered Odikar’s operations and is a massive setback to human rights work in Bangladesh,’ said FORUM-ASIA.

Despite international criticism and scrutiny, Bangladesh continues to intensify its crackdown on civil society organisations and human rights defenders, and stifle the freedoms of expression, association, and peaceful assembly, with impunity. FORUM-ASIA strongly reiterates its calls on the government to immediately cease the criminalisation of human rights work and the continuous affronts to the fundamental freedoms of association and expression.

FORUM-ASIA calls on the Government of Bangladesh to:

40% of evacuees from Afghanistan have left Japan over poor support

US lawmakers call for strengthening ties with India over China "threat"