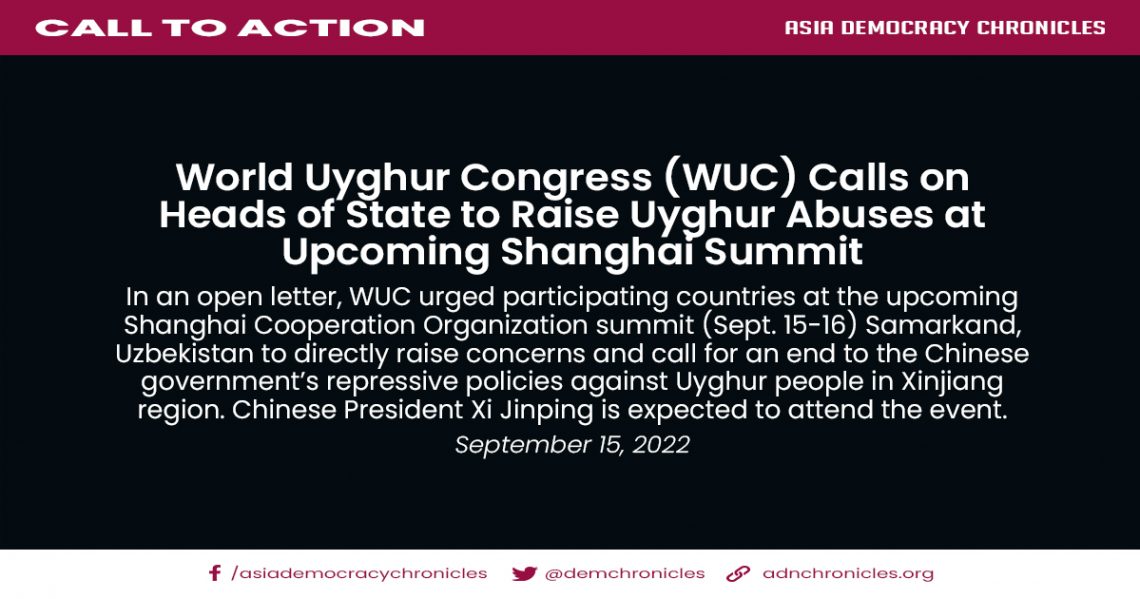 To the Attention of:

We, the World Uyghur Congress (WUC) urge you to meaningfully address the severe human rights abuses against the Uyghurs during the upcoming Shanghai Cooperation Organisation (SCO) Summit, on 15-16 September in Samarkand, Uzbekistan. As the Summit will be attended by Chinese President Xi Jinping in person, being his first foreign visit since the start of the pandemic, we call on you to use this significant opportunity to directly raise your concerns and call for an end to the Chinese government’s repressive policies.

On 31 August 2022, the United Nations (UN) Office of the High Commissioner for Human Rights (OHCHR), released a damning report on the human rights abuses perpetrated against the Uyghurs and other Turkic peoples. The report presented a clear assessment on mass arbitrary detention, forced labour, sexual and gender-based violence, birth prevention measures, family separation, and other abuses which it said “may constitute international crimes, in particular crimes against humanity”.

The report said that the Uyghur human rights crisis “requires urgent attention by the [Chinese] Government, the United Nations intergovernmental bodies and human rights system, as well as the international community more broadly.” This call for action has been reiterated by a group of UN Experts, who said that the OHCHR’s profound concerns “cannot, and should not, be ignored by the international community.”

The upcoming SCO Summit provides an important opportunity for your excellencies to embrace these calls to action, by taking a clear stand against these human rights abuses and conveying your concerns directly with President Xi Jinping. We urge you to call on President Xi Jinping to close the internment camps and immediately and unconditionally release all those detained, dismantle the state-sponsored forced labour schemes, and to end all human rights abuses related to this system of oppression.

As members of an international community built on key principles such as the defence and protection of fundamental human rights and freedoms, it is your moral obligation to raise your voice against the Chinese government’s crimes against the Uyghur people. Likewise, we expect you to stick true to the SCO’s internal principles, which includes equal rights, and take steps to ensure these are also applied in relation to the Uyghurs and other Turkic peoples. #

US lawmakers call for strengthening ties with India over China "threat"