byTaiwan News
in Statements
Reading Time: 2 mins read
A A
0 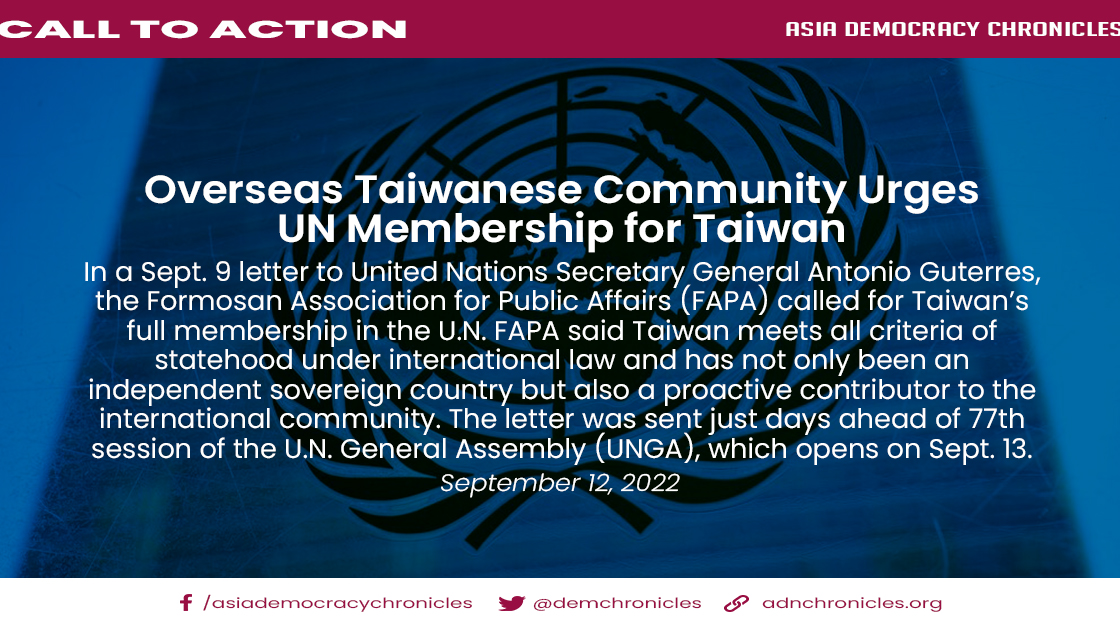 According to a statement released by the Formosan Association for Public Affairs (FAPA), presidents of overseas Taiwanese organizations wrote in the letter: “When the 77th session of the UN General Assembly (UNGA) opens on September 13, 2022, the 23.5 million people of Taiwan will again be simply ignored, left out in the cold without legitimate representation.”

They added that though the U.N. General Assembly Resolution 2758 awarded a seat to China and expelled “the representatives of Chiang Kai-shek (蔣介石),” it did not grant China “the right to represent the people of Taiwan, nor did it recognize China’s territorial claim over Taiwan.” Therefore, China’s attempts to cite the resolution to “justify” Taiwan’s exclusion from the U.N. are “absurd and baseless.”

The presidents wrote that Taiwan meets all criteria of statehood under international law and has not only been an independent sovereign country, but also a proactive contributor to the international community. According to them, “It is the aspiration of overseas Taiwanese to see Taiwan join the UN and all its specialized agencies as a ‘full Member State,’ under the name ‘Taiwan’ and as the newest 194th member of this august body.”

Taiwan’s right to participate in international affairs, the presidents wrote, “should not be restricted by China’s political bullying and territorial ambitions.” They added that it is time for the world to stand up against China.

Additionally, FAPA President Chien Minze (簡明子) wrote that while Taiwan is thankful for U.S. support of Taiwan’s meaningful international participation, having to use the name “Chinese Taipei” is “humiliating.” He added, “There are NO legal hurdles for Taiwan to join the United Nations. There is just one hurdle and it is a political one — it is called ‘China.’”

Activist gets 2 years in jail for protesting ‘In Pink’