Several Malaysian support groups have urged the foreign ministry of Malaysia to get ASEAN to tackle the problem of syndicates using the lure of overseas jobs to capture and trade the job-seekers. 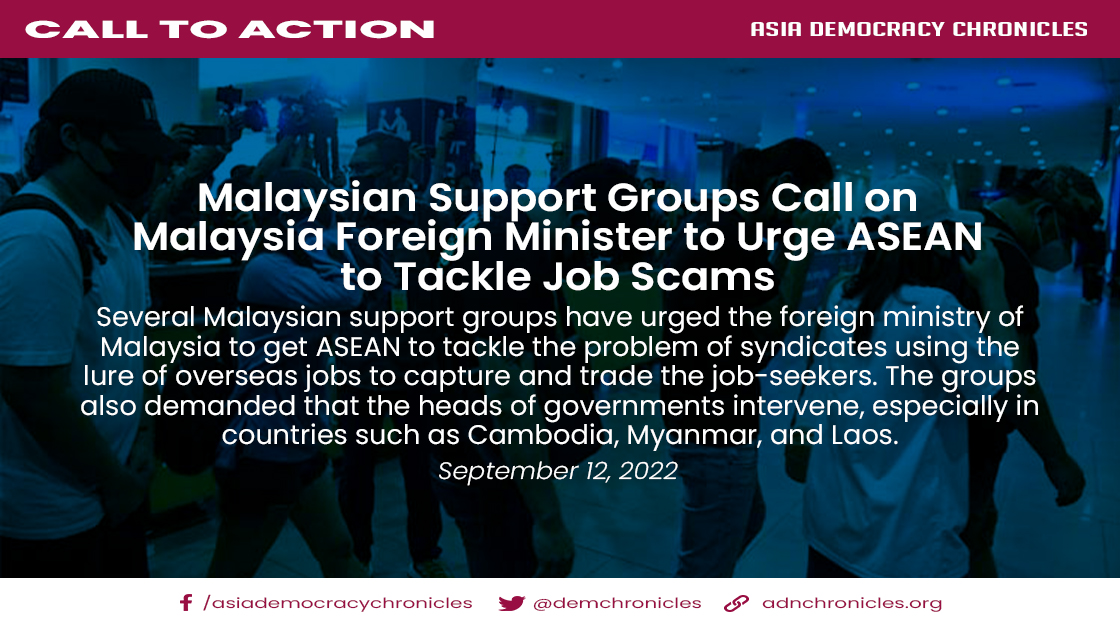 In a memorandum handed to the foreign ministry, the groups also demanded that the heads of governments intervene, especially in countries such as Cambodia, Myanmar and Laos.
Family members of the victims were present when the memorandum was handed over.

“The foreign ministry and the Malaysian government need to use the highest platform available,” he said to reporters after handing over the memorandum, which urges the government to take drastic measures to overcome the issue.

“We need to put pressure by using the Asean platform and the prime minister (of each Asean country), because if we continue to use the normal channels the case will never be solved,” he said referring to embassies and relevant authorities of the countries involved as being the normal channels.

Hishamuddin said victims of the syndicates are also sold from one agent to another or moved to other countries using illegal routes.

The secretary of the police force, Noorsiah Mohd Saaduddin, had said last month that 238 Malaysians have fallen victim to the jobs syndicates, with 168 people still stranded abroad.

The victims were mostly deceived by advertisements posted on Facebook promising them career opportunities as customer service officers abroad with good pay.

They were enticed to contact the agents through chat messages, and would be told that their travel expenses would be taken care of.

However, upon arrival at the destination, their travel documents and phones are confiscated and destroyed and they would be locked up and eventually forced to work for syndicates involved in online gambling, investments, and love scams, among others.

On Friday, a group of 24 Malaysians who fell victim to job scams in Cambodia were returned home with foreign minister Saifuddin Abdullah, who was in Phnom Penh on a working visit.

Another 29 still waiting to be deported in Phnom Penh and Sihanoukville Immigration detention centres in Cambodia. #