Renting is already a trying experience in Sri Lanka. The twin economic and political crises are bound to make it even more unpleasant.

he house is in an upscale neighborhood in Colombo and in the heart of the commercial district of the capital. But nearly right after Sahan (not his real name) began renting the property in mid-2021, the roof began to leak. He informed his landlady about it, but up till now, the roof remains unrepaired.

These days, water drips from the beams of the ceiling whenever it rains. Sahan says that as a result, he is now unable to use the living room and family room.

“For months, my landlady has been saying that she cannot do the repairs because she has financial difficulties,” Sahan says. He is now in a dilemma because moving out at this point is “inconvenient.”

As in many countries in the world, tenants and landlords in Sri Lanka are often at odds with each other over a wide range of matters — from repairs to amounts due, to cleanliness, and sometimes even privacy. But with Sri Lanka in the grips of both an economic crisis and political turmoil, issues bedeviling renters and landlords alike in the South Asian nation have been exacerbated and are bound to remain unresolved for even longer than usual — if at all.

One house agent dealing with rentals in the capital of Colombo told Asia Democracy Chronicles, “Because of increased material and labor costs, most landlords no longer do regular house repairs.”

Hashim Nazahim, a landlord who rents two units in Mount Lavinia, a suburb of Colombo, confirms this. He says that it does not make sense to attend to regular house repairs since “this cost cannot be absorbed from the rent.”

In Sri Lanka, renting houses and apartments is common in urban areas. Government statistics showed that in 2019, 11.6 percent of the urban population was living in rented or leased properties. During the same year, Colombo had the highest percentage (13.8 percent) of the population who were tenants.

With the economic downturn deepening over the past few months, however, the demand for rental housing has declined, say both Nazahim and the house broker. “For example, a house that was rented for LKR 150,000 (US$411.96) earlier cannot be rented for even LKR 80,000 (or almost US$220) now,” says the house broker. That’s mainly because incomes have either remained flat or declined; in 2019, the median urban area income was LKR 74,679 (US$205.10).

The house broker says, “But, there is still some demand from the families who move to Colombo for business or work purposes and for enrolling their children in schools. Housing units in more residential areas in Colombo still have demand from the expats.” 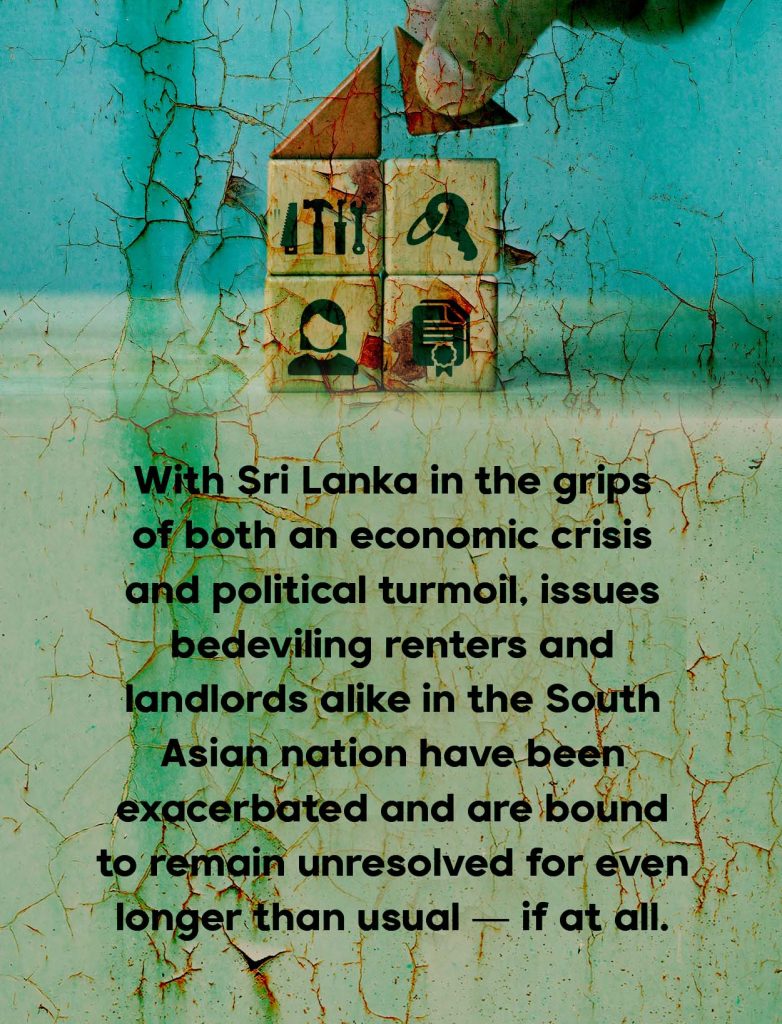 The overall economic outlook, though, remains grim. The country’s shrinking foreign currency reserves have already led to shortages in essentials such as fuel, cooking gas, and medicine. Meanwhile, food prices have increased sharply. By June 2022, the year-on-year inflation was 42.4 percent, while the year-on-year food inflation was 80.1 percent.

In some cases, the widespread economic pain has led people to become more tolerant of each other. Nazahim, for instance, says that his tenants have been quite understanding when he is unable to do the repairs right away, while Nazahim has been quite lenient in the past several months whenever the tenants could not pay rent on time.

But some tenants — and landlords — fear that the crisis would only make bad renting setups even worse. Seeking help from the authorities, for instance, may probably lead nowhere at present, considering that the government is still trying to put itself back in working order. In truth, even before Sri Lanka’s economy began to tank, very few tenants who had problems with their landlords resorted to the legal protection available to them, partly because of the mistrust Sri Lankan society has of the legal system.

For example, take Abdul Gaffoor, who rented a house in Moratuwa, a Colombo suburb, with his family. At first, they did not find anything amiss with their new dwelling. Then the tropical monsoons started, and with the torrential rains came a stench that seemed to be rising from the bathroom.

Gaffoor’s family realized that there was no drainage system connected to the toilet; instead, its contents were going to a pit dug in the ground. When it rained, the pit would overflow with murky, foul-smelling water. Generally, when this happens, the remedy would be to pump out and clean the pit, but Gaffoor’s landlord did not bother to do that. Not even the complaints from the neighbors drew a response from him. Recounts Gaffoor, “We tried to keep away the bad smell with air freshener, and moved out at the end of the contract.”

Gaffoor says that he was afraid to take any action after learning that a previous tenant who lodged a complaint with the public health inspector about the overflowing toilet pit got into trouble with the landlord, an ex-military man. The inspector had issued the landlord a notice to fix the issue. Instead of complying, however, the landlord threatened the tenant with the help of his friends from the armed forces.

Gaffoor feared something similar could happen to his family if he complained to the authorities. “My mother stayed alone at home during the daytime,” he says, “and I did not want to make any drastic moves because of this.”

Gaffoor’s experience is not uncommon, and there are other tricks unscrupulous landlords play. These include squeezing in a maintenance clause to the tenancy agreement, often making the tenant responsible for repairs approximately 20 percent of the value of the monthly rent or more, and then lining up the house repairs, in the hope that the tenant would pay for them.

Lewis and his partner experienced this firsthand in November 2021 when they signed up to rent a four-bedroom colonial villa with a fully equipped kitchen and antique furniture in Hikkaduwa, on the southern coast of Sri Lanka. By the time they arrived to occupy the house, kitchen fittings and some of the furniture had disappeared.

”That was the day we received the draft contract, which stated that any maintenance under LKR 15,000 (US$41.20) was our responsibility,” says Lewis, who asks that this story use only his first name. “It set off my alarm bells so I queried it.”

Lewis describes the landlord’s reaction as ”hostile,” although he was saved from signing the contract by a chance rain that night.

”There may as well not have been a roof — [rain] came through every bedroom and there was a little pond in the dining area to wake up to,” Lewis says.

When renting, the general practice is that the landlord requests a refundable deposit worth six to 12 months the value of the rent. In Sri Lanka, it has become common practice not to return this when the tenants leave, despite the existing terms of the contract.

Lewis had to demand his refundable deposit from the landlord, who was informed that if the deposit were not returned, the matter would be reported on Booking.com, where the property was listed. This helped Lewis get the full deposit refunded, but he says that the whole incident was nevertheless unpleasant, if not distressing.

Lewis says, “Honestly, that whole scenario was a nightmare. We were homeless with two dogs and a cat on … New Year’s Eve.”

Sri Lanka has laws and regulations for the protection of tenants, including those for maintaining proper sanitation in buildings. The Protection of Tenants (Special Provisions) Act, No. 28 of 1970, was enacted for the very purpose of preventing the landlords from “ejecting tenants by resorting to threats, violence, and harassment.” Lawyer Dr. Aparna Madhavi Yahampath says this means that a landlord cannot remove a tenant or any other person occupying the premises without a court order. She adds that under this Act a landlord is also responsible for the repair and maintenance of “essential supply or services,” which include sanitary services.

Yahampath notes that a tenancy agreement that has been co-signed by the tenant and the landlord allows a number of rights to a tenant, including the right to live in a property that’s safe and in a good state of repair. It also provides the tenant with the right to have the deposit returned at the end of the tenancy period.

But aside from having little confidence in the country’s legal system, tenants also find it too slow and the costs of filing suit prohibitive. Even those with the financial means remain skeptical about whether there is anything to be gained by seeking legal protection, considering the time commitment required for prolonged court cases and the cumulative legal costs.

Everyday practical needs also discourage tenants from seeking protection from abusive landlords. Despite what the law says, a landlord turning hostile means it will be a challenge to continue occupying the premises stress-free. In many cases, the tenants would probably be wracked with worry over their safety, as well as anxiety over the prospects of suddenly being evicted. House-hunting and moving are expensive, time-consuming, and tedious tasks.

But it is not just tenants who go through traumatic experiences in house rental transactions. Landlords can have unpleasant encounters as well.

Colombo resident Dumindu recalls that years ago, his parents put up their house in Battaramulla, another Colombo suburb, for rent. He says that the tenant attempted to forcefully occupy the house for some months without paying a single rupee.

“When we asked [for the rent], he said he is not leaving and he’s not paying up,” says Dumindu, who also prefers to be referred to by only his first name. “My father got death threats as well. He simply told us to [file] a civil case, and that he knows how to drag it for 10 years. [We] had to pull some strings and get the house back without going to court.” •

Dimuthu Attanayake is a journalist and researcher from Colombo, Sri Lanka who works on socio-economic, environmental, and big-data-related issues. She was one of the top 12 international young journalists shortlisted for the Thomson Foundation’s Young Journalist Award 2018.