byFocus Taiwan
in Statements
Reading Time: 2 mins read
A A
0 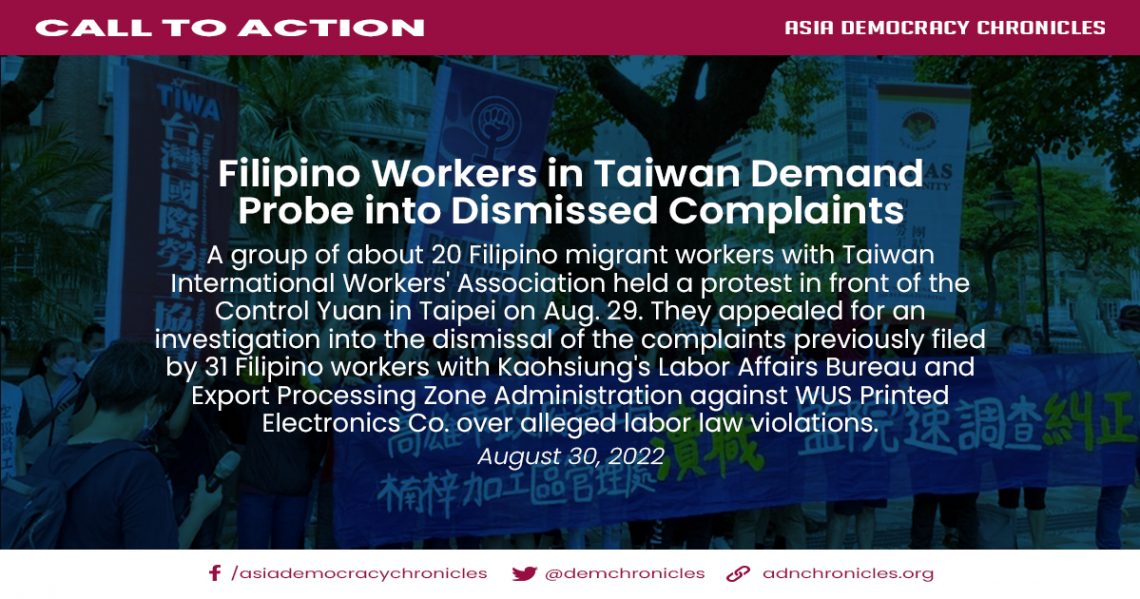 Taipei, Aug. 29 (CNA) A group of Filipino migrant workers gathered in front of the Control Yuan in Taipei on Monday, calling for an investigation into the handling of their complaints to the local government labor office in Kaohsiung.

The group of about 20 Filipino workers, accompanied by migrant worker rights advocates, held up banners and shouted slogans, protesting against what they said a dismissal of the concerns they had raised with Kaohsiung’s Labor Affairs Bureau and Export Processing Zone Administration (EPZA).

The matter stemmed from complaints made in April by 31 Filipino workers at WUS Printed Electronics Co. in Kaohsiung, who had called the Ministry of Labor hotline to seek recourse on a number of issues that they suspected were labor law violations by their employer, according to the Taiwan International Workers’ Association (TIWA).

The workers were referred to Kaohsiung’s Labor Affairs Bureau, after they reported via the hotline that the company had no clear salary structure, paid very little overtime, provided salary slips only in Chinese, and was not transparent about its deductions for food, lodging and taxes, TIWA said at the rally.

The Kaohsiung labor office, however, passed the complaints over to the EPZA, according to TIWA, which described that decision as “absurd,” given that the office is the city’s authority on labor laws and regulations.

The EPZA then sent the matter back to the labor bureau, saying that the only potential violation of the labor laws was related to the overtime hours put in by the workers, which sometimes exceeded 46 per month, TIWA said.

All the other complaints filed by the Filipino workers were dismissed, the association said.

TIWA member Wu Jing-ru (吳靜如) said it is clear that EPZA does have a proper grasp of the labor laws pertaining to migrant workers, as it was not even aware of the basic regulation that states their salary slips must be printed in both their national language and Chinese.

According to TIWA, the Kaohsiung labor office did speak with the Filipino workers, but that was done with the aim of convincing them to drop the complaints.

One of the Filipino employees at WUS Printed Electronics said their complaints had been mishandled and ignored by both the Kaohsiung labor office and EPZA.

“When we approached them with the problems we encountered at the company we work for, instead of being kind and considerate of our complaints, they themselves became allies of the company,” said the worker, who asked not to be named.

Migrant workers just want to be treated the same as Taiwanese employees and be given a chance to sit down with the labor affairs bureau and EPZA staff to discuss their problems, the worker said.

“What we need is understanding and justice, not criticism,” the Filipino worker said. “We will fight for our rights as workers and for the good of all workers, including future migrant workers and local Taiwanese workers.”

When asked about the protest outside its building, the Control Yuan told CNA that it had received a written appeal submitted by the workers but it was too soon to issue a statement on the matter. #