Inquiry Should be Credible, Impartial, Independent 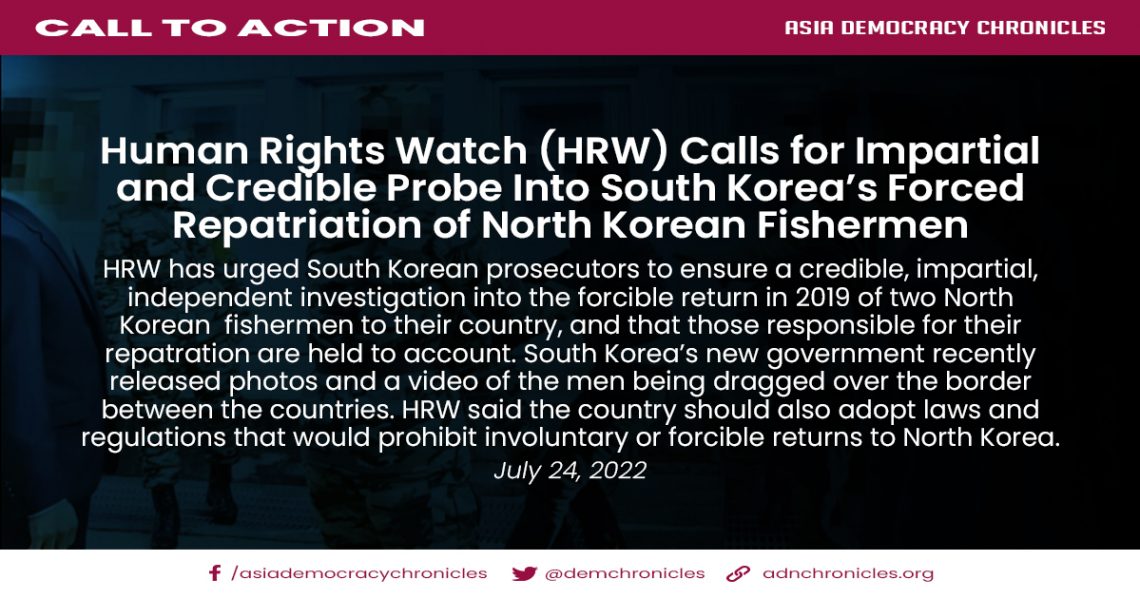 Several weeks ago, prosecutors in South Korea opened an investigation into the involuntary return of two North Korean fishermen to North Korea in 2019.

Human Rights Watch considers the men’s forcible return to a country where they faced torture, forced labor, and possible execution a clear violation of their human rights.

Few details about the case are known. The South Korean navy reportedly apprehended the two men off South Korea’s coast in November 2019. After five days, the authorities forcibly returned them to North Korea, claiming that they had killed 16 of their crewmates in North Korean waters.

The incident occurred during the previous administration of President Moon Jae-in. Last week, South Korea’s new government released photos and a video of the men being dragged over the border between the countries.

Yet regardless of who the men were, or what they allegedly did, their return without fair process violated their human rights. South Korea is a party to United Nations conventions that prohibit governments from returning anyone to a country where they have a well-founded fear of persecution or would face a substantial risk of torture or other ill-treatment.

Upon being returned, North Koreans who escape the country face imprisonment, torture, murder, rape and sexual violence, and enforced disappearance, which have been found to amount to crimes against humanity.

South Korean prosecutors need to conduct their investigation in the fishermen’s case in a manner that is credible, impartial, and independent. If those responsible for the forcible returns, including senior officials, violated rights, they should be fairly prosecuted. The results of the investigation should be published, along with the names and personal details of the two men, and the government should demand that North Korea disclose their fate and whereabouts.

South Korea should also adopt laws and regulations that would prohibit all involuntary or forcible returns to North Korea in violation of international law.