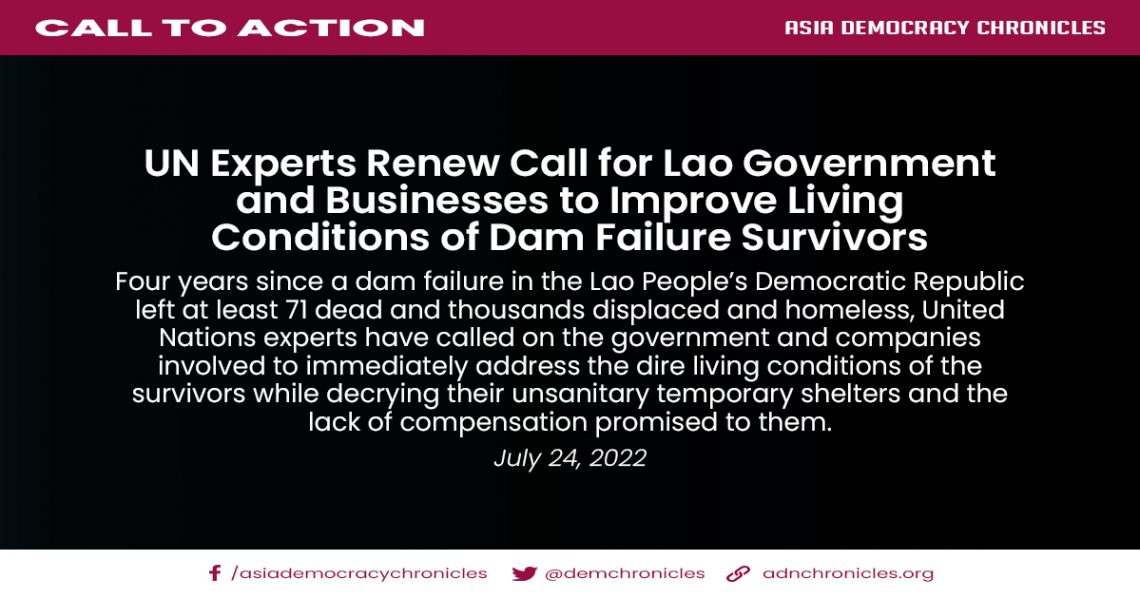 GENEVA (22 July 2022) – Four years since a dam failure in the Lao People’s Democratic Republic left at least 71 dead and thousands displaced and homeless, UN experts* have called on the Government and companies involved to explain why survivors continue to face hardship and neglect.

“It is shameful that four years since homes and livelihoods were washed away, many survivors continue to live in unsanitary temporary shelters, without access to basic services, and are still awaiting the compensation promised to them,” the experts said.

A torrent of water, mud and debris flooded the Attapeu region in south-east Lao – destroying lives, infrastructure and farmland – when the auxiliary “saddle dam D” collapsed on 23 July 2018. Thousands were left displaced and left homeless by the disaster.

In 2020, UN experts called on the Lao Government and relevant businesses to immediately address dire living conditions experienced by survivors. In the two years since this initial communication, the experts have received additional allegations of human rights violations and remain concerned about insufficient recovery efforts by the authorities and companies involved.

“While four years have been sufficient to rebuild the dam, survivors have been left unable to rebuild their lives during all this time,” the experts said. “Not only are many still living in entirely unsuitable temporary accommodation, the compensation promised by the Lao Government and the relevant companies is being delayed, reduced or simply not provided at all, leaving the survivors with no prospect for durable solutions.”

“More disturbingly still, affected communities and human rights defenders advocating on their behalf feel unable to voice their grievances to the Lao Government for fear of retaliation. These fears are not unfounded – in 2019, a human rights defender was arrested and sentenced to five years in prison for criticising the government’s response to the dam collapse,” they said.

The UN experts wrote to the Lao Government to convey their concerns and demand immediate action to address the new allegations. Letters were also sent to 22 companies, including banks, construction and insurance companies, and, in the case of foreign companies, their host States.

Alarmingly, two further dams in the area are reportedly in the same condition as saddle dam D before its collapse in 2018. Both are displaying signs of impending failure if reservoir levels reach a certain level.

“Action must be taken now to ensure that these massive hydroelectric development programmes do not cause greater harm than they do good,” the experts said. #