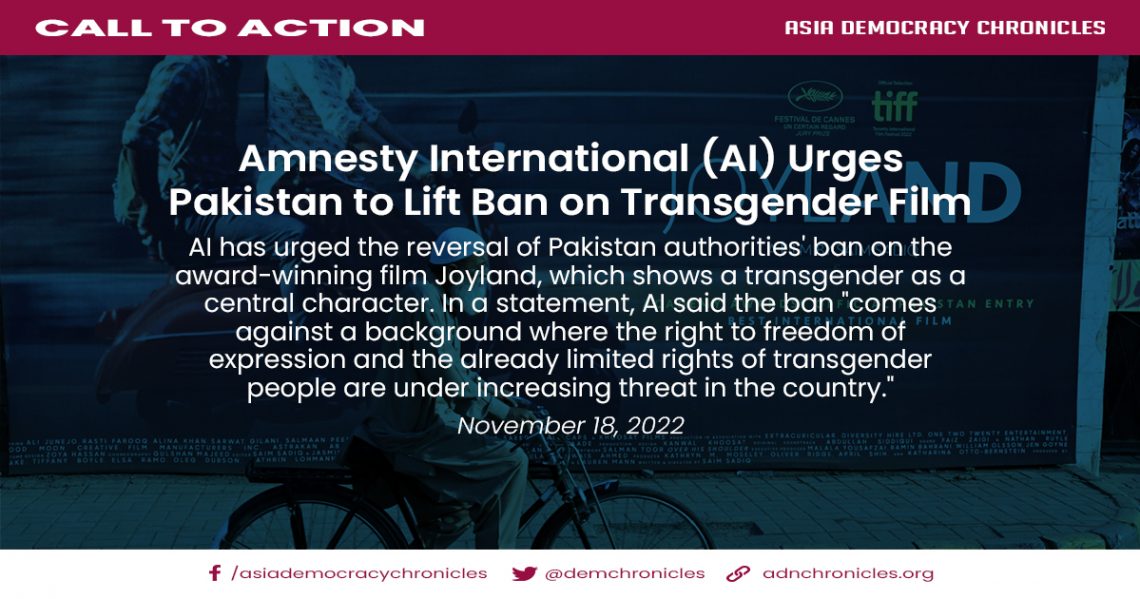 In response to the recent ban by the Government of Pakistan on the award-winning film Joyland which shows a transgender person as a central character and the subsequently formed Review committee’s indecision on reversing the ban today, Nadia Rahman, Researcher/Policy Advisor on Gender at Amnesty International said:

“This is the latest in an alarming trend of censorship and crackdown on freedom of expression in Pakistan. The ban on the film Joyland comes against a background where the right to freedom of expression and the already limited rights of transgender people are under increasing threat in the country. We hope this disappointing decision of revoking the film’s license for release in Pakistan is reversed immediately, and efforts are made to loosen the grip over what people can read, watch, speak or do.

The ban on the film Joyland comes against a background where the right to freedom of expression and the already limited rights of transgender people are under increasing threat in the country.

“Free speech and artistic expression are key to telling local stories about human lives and struggles, particularly of those communities that are marginalized. Transgender people in Pakistan continue to lack access to basic services, and are subjected to ongoing harassment, stigma and violence. There is currently a concerted effort to curtail the rights afforded to them under the Transgender Persons Act, and a smear campaign that is stoking stigma and violence against transgender people, actively putting them further at risk.

“When drafted, Pakistan had one of the most progressive legislations on transgender rights in the world. With it, Pakistan had the opportunity to champion the rights of one of the most marginalized groups that have a huge historical and cultural significance within South Asia, and globally. Instead, this deep-rooted and persistent pushback to ensuring their equal place in society further enables the increasing violence and discrimination against transgender people in Pakistan.”

Joyland is the first Pakistani feature to be an official selection at the Cannes film festival, where it was awarded the prestigious jury prize.

In a notification issued on 11 November, Pakistan’s Ministry of Information and Broadcasting revoked the film’s permission to release in theatres for its “highly objectionable material” showcasing the relationship of a man with a transgender woman.

On 14 November, the Prime Minister set up an eight-member review committee to deliberate on complaints against the film.

On 15 November, in a press release the Committee concluded that the Central Board of Film Censors (CBFC) needs to conduct a “full board review immediately,” to take a final decision about the suitability for screening of the film Joyland.

In the last year alone (October 2021 – September 2022) 18 transgender people were reported to have been killed in Pakistan – the highest figure in Asia. In the recent report, Pandemic or not, we have the right to live, Amnesty International has documented discrimination, violence and marginalization of transgender people in 15 countries including Pakistan which worsened at the height of the Covid-19 pandemic. #