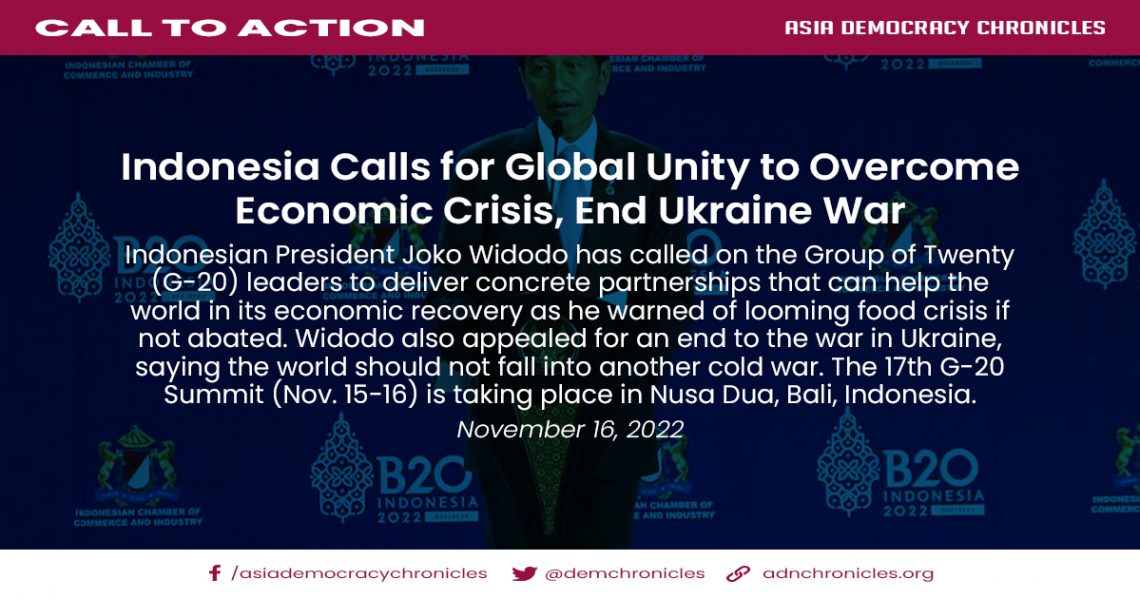 NUSA DUA, Indonesia – Group of 20 leaders began their formal summit on Tuesday in Bali, Indonesia, with host Joko Widodo warning that 2023 could be an even more challenging year unless action is taken on food security including fertiliser scarcity.

“Don’t underestimate the problem of fertiliser,” Mr Widodo said. “If we don’t immediately take steps to ensure sufficient availability of fertiliser at an affordable price, then 2023 will be a more dismal year. The current high food prices could worsen by becoming a food supply crisis. Fertiliser scarcity will cause crop failure in various parts of the world.”

With the Ukraine war and a global spike in inflation overshadowing the summit, Mr Widodo made a fresh appeal to the leaders of the world’s richest countries to unite at least on economic matters.

“We hope the G-20 summit can deliver concrete partnerships that can help the world in its economic recovery,” Mr Widodo said after a bilateral meeting with US President Joe Biden.

“We have no other option, collaboration is needed to save the world,” he said, adding that “G-20 must be the catalyst for inclusive economic recovery”.

He also called for an end to the war in Ukraine, while adding “we shouldn’t divide the world into parts. We must not let the world fall into another cold war”.

Disruptions to grain supplies from Ukraine since Russia invaded the country in late February have exacerbated food shortages and contributed to inflation around the world.

There have also been shortfalls of fertiliser from Russia, although as a product, it is not under sanction.

The G-20, which includes countries ranging from Brazil and India to Saudi Arabia and Germany, accounts for more than 80 per cent of the world’s gross domestic product, 75 per cent of international trade and 60 per cent of its population.

A positive sign on the eve of the summit was a three-hour bilateral meeting between US President Joe Biden and Chinese leader Xi Jinping, in which the two leaders pledged more frequent communications despite many differences.

The talks appeared to signal an improvement in relations between the superpowers after a downward spiral in recent months.

The Ukraine war and a global spike in inflation are overshadowing the summit, the first time the meeting is being held since Russia’s February invasion of its neighbour.

Ukraine’s President Volodymyr Zelensky addressed the summit via video link, according to a tweet by the European Union’s ambassador in Indonesia.

A joint G-20 communique, which would need to be agreed by all parties, appears unlikely, with Indonesia instead pushing for a leaders’ declaration, diplomatic sources say.

However, European Council President Charles Michel said there was an agreement among officials on a text communique on Monday evening, which he described as “positive”.

G-20 leaders will denounce the use of, or any threat to use, nuclear weapons, according to an early draft seen by Reuters. However, such a communique would need to be confirmed by the leaders.

The G-20 ministers’ gatherings have failed to produce joint communiques due to disagreement between Russia and other members on language, including on how to describe the war in Ukraine.

British Prime Minister Rishi Sunak said on Tuesday that Mr Putin’s regime will hear the chorus of global opposition to its actions. Mr Sunak will call on G-20 for coordinated action to address economic instability and the rising cost of living in the wake of Russia’s invasion, his government said.

Mr Biden will be unapologetic in his defence of Ukraine, US officials have said.

“I won’t get ahead of the final negotiations, but the G-20 will make clear that Russia’s war is wreaking havoc for people everywhere and for the global economy as a whole,” said one official, who spoke about the US view on the summit on condition of anonymity.

But Mr Xi and Mr Putin have grown increasingly close in recent years, and reaffirmed their partnership just days before Russia invaded Ukraine.

Nevertheless, China has been careful not to provide any direct material support that could trigger Western sanctions against it. #