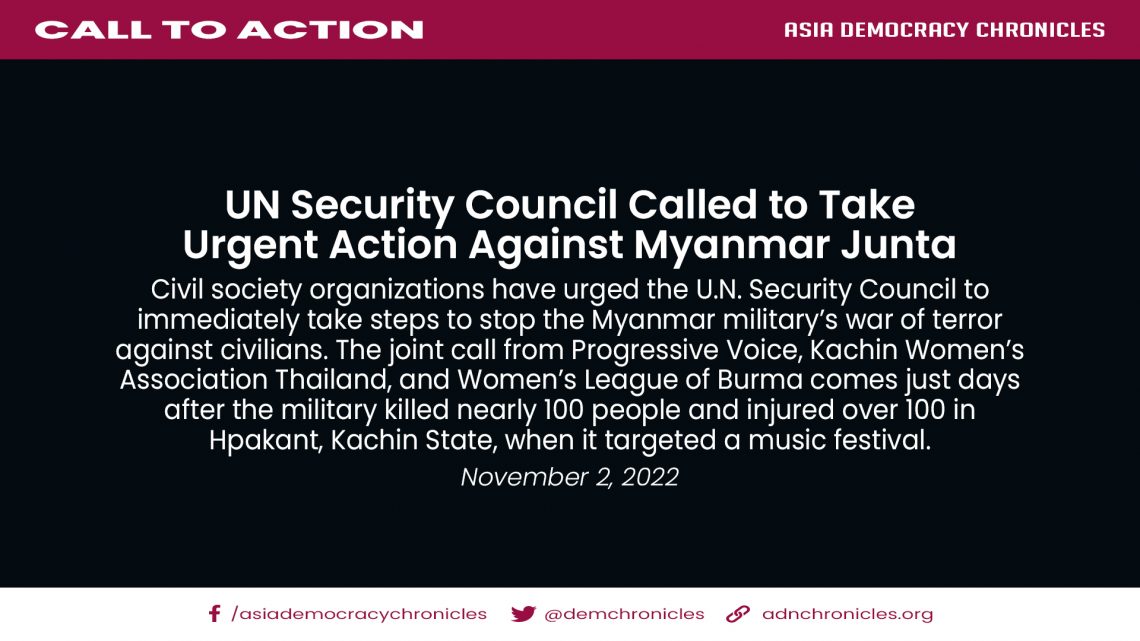 In the face of the Myanmar military’s mounting atrocities against millions of civilians, the ASEAN Foreign Ministers’ decision to retain the failed Five-Point Consensus is yet another indication that the UN Security Council must take concrete action by adopting a resolution on Myanmar, the groups said.

On 23 October, the Myanmar military killed nearly 100 people and injured over 100 in Hpakant, Kachin State, when it targeted a music festival that was attended by around a thousand people who were celebrating the founding of an ethnic revolutionary organization, the Kachin Independence Organisation. The military refused to allow those injured access to treatment at a nearby hospital.

In responding to the atrocity crimes in Kachin State, Moon Nay Li of Kachin Women’s Association Thailand said: “The UN Security Council must act with utmost urgency in response to the Myanmar military’s airstrikes in Hpakant, Kachin State, that has killed nearly 100 people.

“If the Security Council had acted decisively, we may not be in this situation where we mourn the loss of our friends, family, and colleagues. The lives of Myanmar people are at even greater risk as the Myanmar military continues to target civilians indiscriminately as they commit atrocity crimes.

“The Council must immediately exercise its power to pass a resolution on Myanmar that imposes a global arms embargo and targeted economic sanctions against the military and its associates. It is crucial that the Council refers the situation of Myanmar to the International Criminal Court to end its killing spree, and to hold perpetrators accountable for the genocide committed against the Rohingya and war crimes and crimes against humanity against other ethnic minorities.”

In consideration of the inevitable veto of a resolution by Russia and China on the Security Council that continue to provide weapons to the Myanmar military, the groups called for the resolution to be brought to the UN General Assembly for an open debate and vote.

Khin Ohmar of Progressive Voice said: “The Security Council and ASEAN must acknowledge that their inaction has emboldened the military, sending a signal that it could commit a massacre without facing any consequences. The timing of the massacre — just days before the ASEAN Foreign Ministers’ special meeting and the Special Rapporteur’s reporting to the UN General Assembly — is blatant evidence of the junta’s defiance against condemnations, which have proven to be empty. The decision by ASEAN Foreign Ministers to retain the Five-Point Consensus only further reinforces this message.

“In failing to act decisively, ASEAN is only working in favor of the illegal junta, shielding any effective action against this junta by the Security Council. This opens ASEAN up to becoming complicit in the junta’s atrocity crimes, including in the massacre in Hpakant.

“Instead of addressing the crisis in Myanmar, the UN are partnering with the very perpetrators who committed the massacre in Kachin State. The UN cannot even name the perpetrators of these crimes in a statement that condemns this act of terror in Hpakant, despite them standing accused of serious international crimes before the world’s highest courts.

“You cannot solve the crisis in Myanmar by shaking hands with war criminals who created this crisis, while neglecting the will of the people of Myanmar.”

Naw Hser Hser of Women’s League of Burma said: “Lending further legitimacy to the junta by inviting them to summits, meetings and other platforms will only lead to more deaths and displacements on the ground as the junta becomes ever more emboldened to increasingly carry out these airstrikes.

“While the UN are signing MoUs and Letters of Agreement with the junta who are responsible for the humanitarian catastrophe, local grassroots networks are the ones responding immediately to overcome immense challenges the people are facing on the ground and to provide aid to those most vulnerable and most in need, including along the Myanmar’s borders.

“Local humanitarian responders in Myanmar are resourceful, knowledgeable experts in responding to situations of conflict and have the trust of local communities. What they need is practical support with flexible funding from the UN and the international community to continue to carry out their invaluable life-saving work.

“The solution lies with the people of Myanmar, not the military junta. If the international community, the UN and ASEAN are serious about resolving the crisis in Myanmar and ensuring peace and stability in the region, they must stand with the Myanmar people to end the military’s atrocity crimes and hold them accountable.” #