A question of ownership

here is still some debate on whether or not she is indeed 108 years old since it seems she has no birth records to show. But no one questions the fact that Maria Onggay — known more popularly as Apo Whang-Od — is among the world’s most famous tattoo artists right now.

Almost daily, throngs of visitors both local and foreign brave a 50-minute hike on a slippery mountain trail to her home village of Buscalan, up in Kalinga Province in northern Philippines (almost 500 km from Manila), just to see her at work and perhaps get a tattoo. Indeed, the interest in Whang-Od and her art has provided not only her family with a steady stream of income, but also the other villagers who offer homestays, food, guide services, and souvenirs to the visitors. A few have also started offering tattooing services as well. If there are no slots left for the day at her house, where she and her two grandnieces do their inking, Whang-Od directs visitors to other tattooists in the area.

These days, Whang-Od rarely does the tattooing herself — preferring instead to relegate the task to her grandnieces — but she does still tattoo the three dots that are supposed to be her signature on those who want her mark. Those looking for more than a trio of dots on their skin can choose from a menu of designs drawn on pieces of plywood. Most of the designs are traditional Kalinga and are derived from nature, including centipedes, snakes, ferns, and mountains and rivers. The hand-tapping method of tattooing employed by Whang-Od and her nieces is traditional Kalinga as well, as are the instruments and materials they use: a pomelo or calamansi tree thorn, bamboo, and soot mixed with water.

Whang-Od and many of the Buscalan villagers belong to the Kalinga’s Butbut subtribe. The Philippines has at least 110 ethno-lingusitic groups. In the Cordillera Region, which includes the Kalinga province, there are at least 14 groups, under which are subtribes, according to the National Commission on Indigenous Peoples (NCIP).

While many of the visitors to Buscalan these days see tattoos as amping their street cred, inking among the Kalinga has been a rite of passage for generations, with the body markings meant to protect the bearer as well as identify him or her as being part of the community. For men, a tattoo is also a symbol of strength and is often bestowed after a victory in war. For women, it is a symbol of beauty and a coming of age.

Whang-Od herself has her upper body decorated with tattoos, although what most people see is only the snakeskin-like ink on her forearms. She is happy with the income she and her fellow villagers now get because of the tattoo tourists. As for whether or not there is anything wrong with outsiders sporting Kalinga tattoos, a 2018 piece in a glossy magazine quoted her as saying, “OK, you are not Butbut, but why shouldn’t you be powerful and protected, too?”

Commercializing indigenous art and culture can be tricky, however. It can even become quite complicated when outsiders start vying for pieces of the pie. Whang-Od has been caught up in at least two such controversies in the last few years, with both revealing how the indigenous peoples of the Philippines have not been kept up to date with the laws of the land — including by those supposed to protect their interests.

In 2019, for instance, an uproar ensued when the international clothing company New Era released a line featuring Whang-Od’s signature three dots and some of the tattoo designs she often uses. Consisting of t-shirts and headgear, the product line had prices ranging from Php2,095 to Php2,695 (US$39 to US$52 using 2019 rates).

The company’s Facebook page also showed videos of a smiling Whang-Od trying on the gear. But her family would later say that no consent was given regarding the use of the tattoo designs on the products.

The company initially said it had secured all legal matters in the use of the design. Following the public uproar, however, the province of Kalinga conducted an investigation on the matter, as did NCIP. New Era was later asked to undergo the tedious Free Prior and Informed Consent Process (FPIC).

Among other things, NCIP governs Indigenous Knowledge Systems and Practices (IKSP), which cover art and cultural practices that are part of an indigenous community’s history and way of life. These include tattoos and other body art, weaving patterns, chants, dances, and songs. If these IKSPs are to be used, consent from the concerned communities must be acquired through the FPIC.

“If an individual is identified as the one who (independently) created the design, then he/she owns the design,” explains lawyer and NCIP Region I Director Harriet Abyadang. “If a design cannot be attributed to one person as the creator, but is attributed to have originated from the community, it is community owned …. The design arose out of years of use and evolution in the community such that no one person can be identified as the creator of the design.” 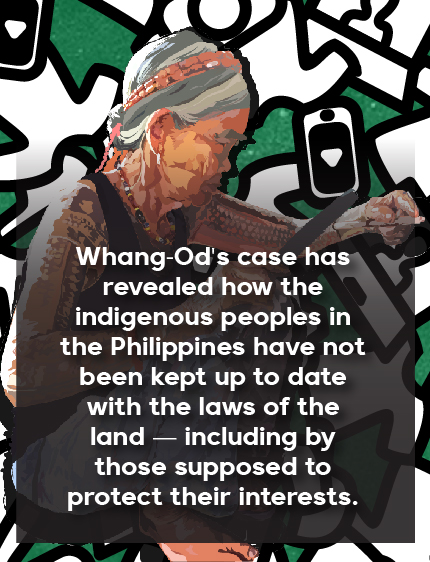 “If individually owned, the IP artist has the right to complain (over misappropriations),” she adds. “If community-owned, the community (can complain) through their authorized representative.”

For Jill Carino, vice chairman for external affairs of the Cordillera Peoples’ Alliance, indigenous art like weaving and tattooing is a traditional skill and is owned collectively by the community. She says that in the case of Whang-Od, her tattoo designs are considered community-owned IKSPs.

For her part, Luchie Maranan of Dap-ayan ti Kultura iti Kordilyera, an art alliance of cultural organizations and individuals, comments: “Culture is dynamic. How can you claim monopoly and stop it from being popularized? We cannot command people not to use it [tangible culture].”

“But,” she clarifies, “if it is used for business and the benefits are not downloading it to the community, that is a different story.”

Maranan cites the case of young Kalinga traditional tattoo artist Ammin Acha-ur, who explains to her clients the history of the tattoo design she is putting on them, as well as the ancient arts of the Kalinga. Maranan says of Acha-ur: “She shares what she knows, she is a culture bearer, she uses it for livelihood and advocacy, continuing her community’s tradition and culture.”

Maranan says that given the lack of rules governing the use of tribal designs, communities have to be empowered and any protest should emanate from them. Hopefully, she says, indigenous communities would start setting standards for the use of their art that would eventually become a benchmark for others like them to do the same.

Such standard-setting, however, has yet to be done by the Butbut even after the New Era debacle. In fact, two years later, Whang-Od found herself at the center of another controversy, this time involving the Palestinian-Israeli vlogger Nuseir Yassin, better known to netizens as Nas Daily.

After the vlogger’s online Nas Academy advertised a course on traditional tattooing featuring Whang-Od, her family complained, with one of her nieces calling it a “scam.” The academy countered by showing a video of Whang-Od affixing her thumbprint onto what appeared to be a document, and insisted that it had obtained her permission to launch the “masterclass.”

Yet it was only after opposition to Nas Academy’s online course mounted and became viral online that NCIP came in to investigate the matter. It later announced that Whang-Od did not consent to the course. According to NCIP, Nas Daily did not explain the provisions of the contract to Whang-Od and her thumbprint was placed on a blank sheet of paper.

Nas Daily then returned to Kalinga. After declaring the contract null and void in the presence of elders and representatives of the local and provincial government, he apologized to Whang-Od.

Rights activist Alma Sinumlag says that the role of Apo Whang-Od — recipient of the 2018  Dangal ng Haraya (roughly, pride of imagination) Award for Intangible Cultural Heritage from the National Commission for Culture and the Arts —  in the continuance of the identity of the Butbut tribe and the Kalinga people cannot be denied.

“When it comes to the issue of New Era and Nas Daily,” she continues, “the protection should (have) come from the self-determination of the Butbut tribe. Community-based protocols should be crafted that will clearly identify the authority given by the community to culture bearers and the roles of the elders or leaders.”

NCIP’s Abyadang meanwhile suggests that to protect designs, symbols, or creations, an indigenous group must undergo the IKSP process and register these with the Intellectual Property Office, as well as have these recorded with the National Library.

Incidentally, indications are that New Era never did go through an FPIC. Some time after the controversy over its Whang-Od line broke, though, the company released a statement saying, “Initial donations were given and part of the proceeds will go to the Butbut tribe.”

In 2021, it came up with another Whang-Od line of t-shirts and headgear, but this time with just her signature three dots and her portrait. Its write-up for the line read in part: “Just like New Era Cap celebrating its 100th year of authenticity and excellence, Whang-Od has also lived a meaningful century with her fruitful contribution in keeping the age-old tradition of Kalinga’s form of tattooing (alive).” ●

Maria Elena G. Catajan is a journalist based in the north of the Philippines.

Maria Elena Catajan is a journalist based in the north of the Philippines.