Vietnam's use of vague definitions of “fake news” and “false accusations” to justify digital repression deals a major blow to human rights.

n July 11, 2022, an online commentator in Hanoi was fined 7.5 million dong (US$320) for “publishing false information” that “defamed the reputation and image” of Vingroup, Vietnam’s largest conglomerate.

The police investigation agency alleged that the man had distributed rumors on social media that Vingroup’s chairman, Pham Nhat Vuong, was banned from leaving the country. Previously, several influential Vietnamese businessmen had received travel bans before being arrested for further investigation into their alleged economic misconduct in the Vietnamese Communist Party’s (VCP) latest anti-graft drive.

Five days later, on July 16, a Facebook user in Hanoi received the same fine for “publishing false information” about the VCP Central Inspection Commission’s reprimand of three high-level government officials. Local authorities claimed that his unfounded statements had “affected the reputation of [these] individuals” and ordered him to remove the “wrongful information.”

Against the backdrop of these “false information” accusations, a number of VCP members and government officials were also disciplined on the same day, with some being expelled from the Communist Party, due to a wide array of wrongdoings, ranging from the mismanagement of lands and state assets to their neglect of duty in protecting the country’s natural resources.

In another case, a Facebook user in Vietnam’s Quang Ninh Province was fined on Aug. 17 after allegedly spreading “false information” under an online post about a controversial sea encroachment project in the province. Many Vietnamese citizens had raised concerns about the construction-related impact the project had on the local ecosystem. The content of his comment was not revealed by the police.

Another Vietnamese social media commenter in Bac Giang Province recently received a fine of 7.5 million dong (US$321.85) on Aug. 28 after he commented in a public post that “Vietnamese police are spending a lot of time at karaoke parlors.” It came after the local police’s raid on brothels covertly operating as karaoke parlors a few days ago. The authorities alleged that his comment “contained untrue information” that “defamed the honor and reputation of the public security forces.”

The Vietnamese government — along with neighboring autocratic Southeast Asian states, including Cambodia, Myanmar, and Thailand — has increasingly weaponized and politicized vague definitions of “fake news” and “false information” to justify its digital suppression of cyberspace.

The use of “fake news” allegations as a legitimate pretext to stifle free speech and curb opposition voices in these four Southeast Asian countries is extensively discussed by Janjira Sombatpoonsiri and Dien Nguyen An Luong in their study entitled “Justifying Digital Repression via ‘Fighting Fake News’: A Study of Four Southeast Asian Autocracies” published in 2022 by the ISEAS Institute in Singapore. The study notes the detrimental effects of the labels “fake news” and “false online information” which have contributed to the erosion of democracy worldwide. 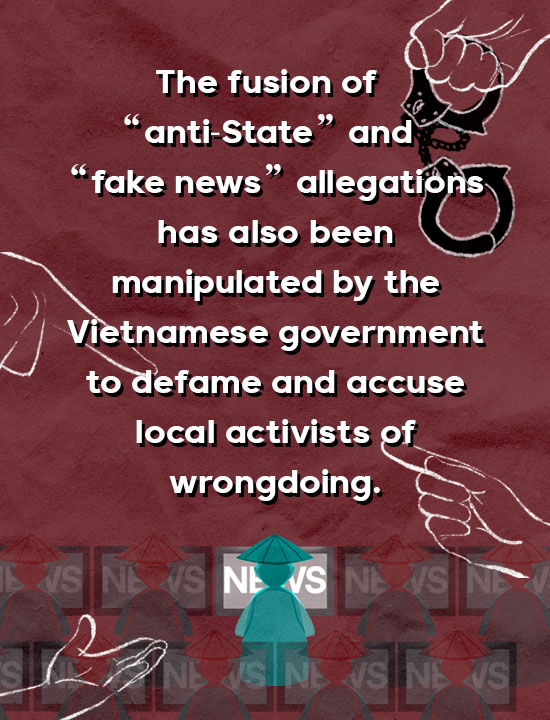 Nonetheless, the urgent need to curb the expansion of disinformation with necessary regulatory measures and content moderation has been manipulated by the region’s autocratic regimes, including Vietnam, to tighten their grip on online discourse and to remove messages critical of the authorities.

The country has consistently labeled online materials that pose threats to the reputation of local authorities and the ruling Communist Party as “toxic content” or “false information.” However, instead of clarifying what constitutes “toxic” and “false,” as well as dictating who gets to decide the boundaries of acceptable content on social media, the Vietnamese government has sought to highlight the consequences of spreading this information, such as “disturbing social order” or “damaging the national image.”

According to the publication, the main tactics used to punish critics of the governments in Vietnam, Thailand, and Cambodia include legal persecution of users  — including many ordinary citizens —  and digital platforms, as well as demanding these social media platforms block or take down unfavorable content. Vietnam and Thailand have also used “fake news” claims to carry out mass surveillance of social media posts and extensive user data collection. In Myanmar, the junta-established State Administration Council has relied on internet shutdowns to achieve this end.

The legal apparatus in Vietnam’s online censorship toolbox includes a range of internet regulations, the Penal Code, and other laws to combat what the local authorities perceive as “wrong” or “distorted” views, “toxic content,” and “fake news,” the study noted.

Among those regulations are Decree 72, which was enacted in 2013, and the 2018 Cybersecurity Law. These legal requirements have forced tech companies to restrict content deemed unsuitable. At the same time, Decree 72 can also be deployed to punish local news outlets accused of publishing false information on their websites.

Another regulation, Decree 15, which was enforced by the government in Feb. 2020, has also been utilized to criminalize social media users responsible for the “creation and dissemination of false and misleading information.” The violators of this decree can face fines of up to 20 million dong (US$836).

Vietnam’s Penal Code, including Articles 88 and 117, which criminalizes the “making, storing, and distributing anti-State propaganda,” and Article 331, which forbids the activities of “abusing democratic freedoms to infringe on the State and individuals’ legitimate rights and interests,” has been frequently deployed to target and prosecute journalists, bloggers, and online activists who are perceived as direct or potential challenges to the regime’s ruling power. The convicted can face up to 20 years in jail.

The government-issued 2013 Decree 72, which deals with the provision and usage of internet services in Vietnam, requires website owners to “eliminate improper information […] at the request of competent authorities.” Non-compliant website owners are subjected to hefty fines and enforced shutdowns, as in the case of the newspaper Phụ nữ TP.HCM (Ho Chi Minh City Women) in 2019, due to its extensive investigations into the environmental costs of tourism projects of the Sun Group, a crony real estate developer.

The fusion of “anti-State” and “fake news” allegations has also been manipulated by the Vietnamese government to defame and accuse local activists of alleged wrongdoings. The journalist Pham Doan Trang, for example, has frequently been accused of “spreading false information” to “sow confusion among the people” and “distort the guidelines and policies of the State.” Articles 117 and 331 in Vietnam’s Penal regulations continue to be used to convict activists and dissidents in the country.

Unlike the Tatmadaw-ruled Myanmar, Vietnam, in recent years, hasn’t relied on internet shutdowns to suppress critics and exert control over its cyberspace. On the other hand, the country has utilized systemic blocking and scrubbing to remove content allegedly “sabotaging or disrupting public security and order” or “causing fear and alarm to the public.”

According to Vietnam’s Ministry of Information and Communications, over 1,200 websites and 20,000 social media posts were removed in 2021 for hosting such content. Another 516 web pages and over 2,000 posts were taken down for containing “false,” “distorted,” or “reactionary” information about the country’s handling of the COVID-19 pandemic.

The Vietnamese government has increasingly tightened its grip on social media content by coercing international tech companies, including Meta and Google, to comply with its censorship demands. The 2018 Cybersecurity Laws provide the legal basis for foreign media companies to take down online content at the government’s request. It was reported that Vietnam had submitted more than 700 content takedown requests to Facebook between 2018 and 2021; meanwhile, 28,595 items were removed from Google search and its video platform, Youtube, from 2009 to 2020.

The study notes Vietnam and Thailand are the two countries in Southeast Asia that massively invest in the construction of surveillance infrastructure to monitor online content and collect user data under the veil of “combating fake news.”

Force 47, an army of 10,000 state-sponsored cyber troops, remains at the forefront of the Vietnamese government’s effort in surveilling, collecting, and censoring information on social media, as well as influencing public opinion and defending the regime from “wrongful opinions” or “hostile views.” They do this via a web monitoring center, established in late 2018.

At the same time, Article 26 of Vietnam’s Cybersecurity Law, which deals with fighting against “fake news,” allows the authorities to collect and access the personal data of local internet users without their consent. The collectible information varies from names and birthdates to credit card numbers and health records. In a new decree on the Cybersecurity Law, international tech firms can also be legally required by the Vietnamese government to store user data in the country and hand over the data upon government request.

In the study’s conclusion, both authors wrote that further research is needed to understand the factors that shape diverging trends toward internet control in Vietnam, as well as Thailand, Cambodia, and Myanmar. The interplay between these autocratic governments, such as Vietnam and Thailand, and foreign social media platforms, is also worth in-depth analysis.

What’s become clear is that despite the differences in their digital capacities and political models, the allegation of “fake news” has emerged as the latest rhetorical explanation to justify the suppression of political critics and to crack down on internet freedom in these four Southeast Asian states. Vietnam, which has always been intolerant toward critics and even constructive commentators, will continue to use “fake news” allegations to serve the regime’s political persecution. ●

This article was first published by The Vietnamese on September 20, 2022, and is being republished here by the Asia Democracy Chronicles with its permission.