They still adore their K-pop idols, but non-Korean fans of Korean pop music are now also making themselves known as political activists.

ho would have thought that young people who like waving lightsticks and singing along to songs about first loves and heartbreak would become a force in politics? After all, most of the pop idols that these youths fanatically follow steer clear of politics themselves, largely because their agencies tell them to remain neutral (at least in public) at all times. Yet for the last several years the global K-pop fandom has been gaining a reputation for political activism across the world — and how.

Not surprisingly, it has been the U.S. K-pop fandom that has garnered the most attention, first through its support of Black Lives Matter, and then through its disruption of a major re-election campaign rally of then-U.S. President Donald Trump, which had him addressing a nearly empty stadium. But K-pop fans based closer to K-pop’s home base have been seen on the political front as well, with most of them in support of liberal issues or leaders.

The latest was the Philippine K-pop fandom that held events and ran a social media campaign in support of the 2022 presidential bid of then Vice President Leni Robredo, whose main rival was the son and namesake of the late dictator Ferdinand Marcos. In 2020, Indonesian K-pop fans took to Twitter to launch a protest campaign against the Omnibus Bill on Job Creation then pending in the country’s legislature. Twitter was also among the social media weapons wielded by Thai K-pop fans who participated in Thailand’s youth-led pro-democracy protests in 2020. And since the military coup in Myanmar in February 2021, K-pop fans there have been busy as well on social media, expressing support for the Civil Disobedience Movement (CDM) and keeping people up to date on what has been happening in their country, as well as providing a means of communication among CDM members.

Ironically, Korean K-pop fans themselves remain largely apolitical and rarely venture beyond donating and doing charity work locally in the name of their idols, or participating in global campaigns on issues such as climate change and Black Lives Matter. For most Korean fans, their fandom is strictly a community where they can have fun and where they are able to escape from whatever troubles they may have, even for a moment.

Korean fans also worry that having their idols involved with politics may not be all that positive, and may expose the pop stars to criticism, as well as risk alienating fans or would-be fans who do not share a similar stance or view. That could also well be the thinking of much of the K-pop industry, although it has not been free of controversy itself; accusations against the industry range from misogyny to abuse and exploitation of its many young talents.

For sure, though, there have been K-pop songs that have been used in political protests in Korea. During the 2016 protests calling for the ouster of then President Park Geun-hye, for example, demonstrators sang or played “Into the New World,” the debut song of the iconic K-pop girl group Girls’ Generation, “Cheer Up” by TWICE (another girl group), “Bang Bang Bang” by the boy band Big Bang, and “Red Queen” by solo singer IU. 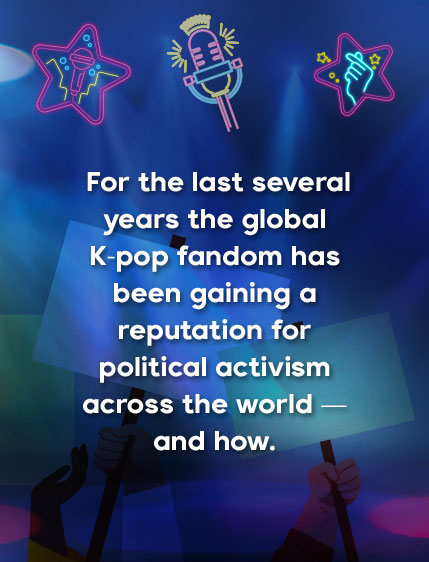 Yet while many of the young protesters were probably fans of K-pop, that may have been significant only to the extent that it influenced their choice of songs that would boost their spirits or had lyrics perfect for taunting authorities. Moreover, unlike non-Korean K-pop fans, they did not explicitly identify themselves as such. (Interestingly, “Into the New World” would also become part of pro-democracy protests in Hong Kong in 2019 and 2020 and Thailand in 2020.)

However, certain peculiarities of the K-pop industry seem to have honed K-pop fans’ organization, mobilization, and communication skills, all of which those outside of Korea are now using for political activism. In truth, despite its widening global reach, the K-pop industry is small and crowded, making competition among its artists fierce. On average, singing groups only have a seven-year lifespan; those with smaller agencies don’t even last that long.

To help keep their idols working and in the limelight, Korean and non-Korean K-pop fans alike try to ensure they keep getting talked about positively in both social and mainstream media. So not only do the fans buy their idols’ official merchandise and albums and attend their concerts and fan meetings, they also organize activities that would generate good news about their favorite artists, including raising funds for causes that they favor or sponsor. Obviously, too, the fans constantly stream and vote for their idols’ songs to turn the tunes into hits.

Many of these activities are done through social media, which speeds up most of the processes involved. With these experiences and skills combined with their sheer number — a recent survey says that globally, there are at least 156 million fans of Korean entertainment, including dramas and webtoons — non-Korean K-pop fans would understandably make a considerable impact with their political and social campaigns.

Notably, too, they are doing so not as individual fandoms of particular groups, but as a united community of K-pop fans. This is even though most would still mention the idol or idol group who “inspired” them to join — or sometimes even initiate — a protest or campaign. A Filipino K-pop fan who was among those who actively campaigned for Robredo told ABS-CBN online: “BTOB (a Korean boy band) has been a very vocal group. They speak up against discrimination. They taught us to stand up for what is right. That’s why we are now standing up for what is right.”

But why bother identifying themselves as K-pop fans in the first place? For one, it is a proud and grateful nod to the community that first brought all of them together and which could now, through its ready network, help them succeed in achieving their objectives. For another, the K-pop-fan identity acts as a call to action to other K-pop fans, both within and outside of their country’s borders. This also enables them to spread awareness of their cause a lot further — something that is crucial not only in social-issue campaigns such as, say, gender rights but also in political movements against repressive regimes, such as those in Myanmar and Thailand.

A third reason is that by highlighting their participation in these campaigns, K-pop fans aim to disprove the often negative stereotypes attached to them. K-pop fans themselves usually refer to each other as “stan,” or an overly enthusiastic or obsessive fan, which is how many non-fans view them as well. Generally, non-Korean K-pop fans are seen as wasting too much time and effort — and money — on their idols who even sing in a language that is not readily understandable to many people outside of Korea. Indeed, in some countries in Asia, in particular Japan and China, there have been instances in which the entire “Hallyu” or Korean entertainment wave has been regarded as nothing short of a cultural invasion.

That non-Korean K-pop fans proudly declare themselves as such while engaging in political activities in their own countries could be taken as a declaration that while they are in admiration of foreign artists, they have not given up their stake in their nation’s future. As Chayanit Choedthammatorn, a Thai researcher of Korean studies, told a Reuters reporter during the 2020 Thai pro-democracy protests, “Although they are K-pop fans, they are Thai citizens first.”

The same Reuters report also quoted a Thai K-pop fan as saying, “K-pop fans would love to just fangirl over our ‘oppas’ and care about nothing else, but with our country like this, we as citizens have to call for better things.”

Nurul Sarifah, an Indonesian fan of the boy band EXO, is calling for better things as well — specifically a better planet. In 2021, she co-founded Kpop4planet, a fan-driven online platform focusing on climate action campaigns. In an interview earlier this year with the publication gal-dem, Sarifah said that through Kpop4planet, she and the other members of their growing team of K-pop fans want to show that they can have “a positive impact” not only for themselves or their friends or their idols, “but also on the society and the environment.”

One of Kpop4planet’s campaigns is cheekily called  “No K-pop on a Dead Planet.” It aims to convince members of the K-pop industry to reduce their carbon footprint, such as by using sustainable materials in concerts and music albums. According to Sarifah, they have yet to get any official response from the K-pop companies they have contacted, but she noted in the gal-dem interview that at least there are a few that have begun using eco-friendly packaging for idol albums. And while these are very small steps forward, they are nevertheless welcome, especially since they are from an industry that has been said to be too quick to sacrifice principles for profit, even as they expect their idol talents to always have a “good citizen” image. ●

Hyun-Phil Na is the executive director of the non-profit Korean House for International Solidarity, which works to promote human rights and democracy in the Asia-Pacific region. He is also the co-chairperson of the Executive Committee of the Korean Civil Society in Support of Democracy in Myanmar.

Hyun Phil Na is the executive director of the non-profit Korean House for International Solidarity, which works to promote human rights and democracy in the Asia-Pacific region. He is also the co-chairperson of the Executive Committee of the Korean Civil Society in Support of Democracy in Myanmar.