Hunger also has an Asian face

According to the United Nations, the world is witnessing a "potentially catastrophic" global food crisis after two years of a protracted epidemic, an economic downturn, and growing unemployment. In 2021, 421 million Asians went to bed hungry, a statistic that has climbed considerably since.

On July 22, 2022, Sri Lankan security forces violently dispersed protesters in Colombo, wounding more than 50 people and detaining at least nine others.  The attacks came after peaceful protesters rejected the choice of Sri Lanka’s legislators for president, Ranil Wickremesinghe, who took office on July 21. At the back of the island nation’s political turmoil, however, is an unparalleled food, fuel, and debt crisis, which sparked a four-month-long protest that resulted in the resignation of former President Gotabaya Rajapaksa on July 13.

Residents of Sri Lanka have been grappling with rising consumer prices, rationed fuel, and rotating blackouts in the last several months. The most devastating of all has been the skyrocketing food prices, with an increased rate of more than 80.1 percent at the end of June, rising faster than the headline inflation rate of 54 percent. 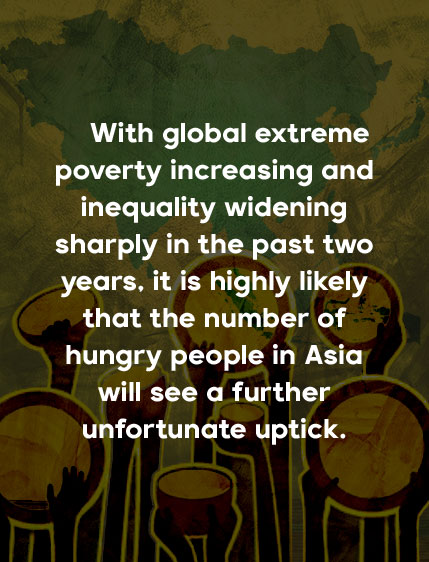 For sure though, aside from nearly daily increases in food prices, many Sri Lankans have been going hungry since the start of the year also because of the fatal confluence of an unpopular dictatorship, global economic upheaval, and significant unemployment.

The steep rise in food prices in Sri Lanka is now ubiquitous across the whole of Asia, however. Indeed, according to the Food and Agriculture Organization (FAO), Asia remains home to most of the hungry people in the world, at 425 million in 2021.

In India alone, there were 236.4 million people experiencing hunger as of July 23. Indians accounted for 71 percent of the reportedly 331.6 million hungry people in South Asia by the end of 2021. Roughly 18 percent of the 164 million population of Bangladesh also experienced hunger last July.

With global extreme poverty (those living under US$2 a day) increasing and inequality widening sharply in the past two years, it is highly likely that the number of hungry people in Asia will see a further unfortunate uptick.

Graph 1. Global hunger has been rising steadily since 2017. As of 2021, nearly 500 million people in Asia experienced hunger. With the food price index rising sharply from 2020 to 2022, vital food sources may continue to be out of reach.
(Source: UN Food and Agriculture Organization, FAOSTAT)

Globally, FAO’s recently released report, State of Food Security and Nutrition in the World, paints a bleak picture of 2021. Last year, 720 million to 825 million people, or nearly one in 10, went hungry. In comparison, over 805 million people were estimated to be hungry in 2005, which puts the upper end of last year’s estimate at a 17-year high.

But the situation is expected to only worsen this year. In truth, the United Nations estimates that if the current trajectory continues and despite optimistic parameters, the number of hungry people by the 2030 deadline to meet the Sustainable Development Goals will remain the same as when the SDGs were set in 2015: 670 million.

The irony is that the FAO reported that cereals such as rice and wheat, meat, dairy, fish, and oils had reached record levels of production in 2021, marking the fourth consecutive year of global food supply expansion.

An inextricable link to oil

Even while food price rises have been blamed on supply-chain bottlenecks in the past and Russia’s continuing invasion of Ukraine, a more in-depth look reveals a myriad of chokepoints in today’s global food system.

Take the indices that OECD-FAO Agricultural Outlook reports annually. Cereals such as rice, wheat, and maize have shadowed food costs since 2012. But the current hike in 2021 was triggered by an increase in the price of edible oil.

Graph 3. Prices of meat, dairy, cereal, and sugar have generally stayed close to the food price index since 2012. But when the oil price index began to rise sharply in 2020, the prices of these items followed suit.
(Source: UN Food and Agriculture Organization)

Today’s agriculture is inextricably linked to the fossil-fuel industry. First, agricultural inputs such as fertilizers, pesticides, and machinery all use fossil fuels. Urea-nitrogen, used as fertilizer for cereals, has more than quadrupled in price: from US$200 per ton in 2020 to US$900 per ton in 2021, beyond its peak of US$800 per ton in the 2008 global food crisis.

Second, the rapid increase in biofuel production in Brazil, the European Union, and the United States competes with food production, pushing its price up further and linking it more closely with the fossil fuel industry. Oil crops and grains, such as wheat, maize, and canola, contribute significantly to biofuel production. A recent report shows that the United Kingdom’s consumption of biofuels alone can feed 3.5 million people.

With the war in Ukraine affecting both fuel and wheat supplies, it has unraveled the chokepoints of an increasingly fragile global food system.

At the same time, inequalities within and among countries are asserting themselves amid the global food crisis.

However, a recent Wall Street Journal report noted that the relatively stable price of rice may be “saving Asia” from the worst of the global food catastrophe. With record harvests in main exporters India, China, United States, and Vietnam, rice prices have actually gone down in international markets by 17 percent.

Graph 4. The price of rice has decreased in countries like India, China, the United States, and Vietnam. But the same does not hold true for countries like the Philippines. Despite being an agricultural country, it is one of the largest importers of rice in the region.
(Source: Numbeo, FAOSTAT)

That decrease, though, remains to be seen in other markets. Rice prices in the Philippines, one of the largest importers of rice despite being an agricultural country, have yet to reflect any dip. In spite of the current president’s campaign vow to bring rice prices down to PHP20 (approximately US$0.40), local stores still display sticker prices of over a dollar per kilogram.

Furthermore, a diet consisting primarily of rice is far from being nutritious. FAO notes that a total of 3.1 billion people, or over a third of the world population, could not afford a healthy diet in 2021 — representing a 112-million increase from 2020. Asia hosted the bulk of these people, with 78 million more individuals in the region who could not afford adequate and well-rounded meals.

Graph 5. Food imports in many countries have also been rising steadily in recent years. They are expected to increase even further in the remainder of 2022. “LDCs” refers to least developed countries. “NFIDC” refers to net food-importing developing countries.
(Source: UN Food and Agriculture Organization)

More revealing, however, is the report released by FAO in June, which indicates that vulnerable countries like Sri Lanka are paying more for less food in the global market. The food import bill, a measure in U.S. dollars of the expenses incurred in importing foodstuffs, is expected to rise to US$1.8 trillion in 2022.

The report also says that a global decline in cereal imports from developing countries suggests that more poor nations are struggling with soaring food prices. Developing countries represent the bulk of the increase in food import payments globally, as least developed countries’ bills have stagnated.

The latest Global Food Security Index report from The Economist shows a widespread decline in food security, downgrading scores for over 70 countries because of unaffordable food. In Asia, Laos, Nepal, Bangladesh, India, Pakistan, Myanmar, and Sri Lanka are at the bottom of the rankings in terms of affordability scores, according to the Index released last year.

Graph 6. People in countries like Bangladesh, the Philippines, and Pakistan spend a large part of their income on food. With income loss and rising food prices, the prospect of hunger may soon become a reality.
(Source: World Bank)

These days, entire Asian countries are battling to keep rapidly rising food costs under control through imports. But the most disadvantaged households in the region are still feeling the pinch.

Despite higher levels of inflation and food price increases in East Asia, those in the South and Southeast regions are more likely to go down the Sri Lankan path.

Like those in Sri Lanka, the more vulnerable households in Bangladesh, the Philippines, Pakistan, Vietnam, Indonesia, and India spend at least a third of their income on food alone. Considering that even FAO’s estimates of people experiencing hunger in 2021 “do not take into account the income shocks” that happened in the last two years, that is more likely a conservative picture.

Without safety nets, poor households, and even middle-income ones, are in freefall in South and Southeast Asia as this catastrophe unfolds. ●

In face of sabre-rattling by mainland China, Taiwan military shows off its mettle in latest combat drills

In face of sabre-rattling by mainland China, Taiwan military shows off its mettle in latest combat drills