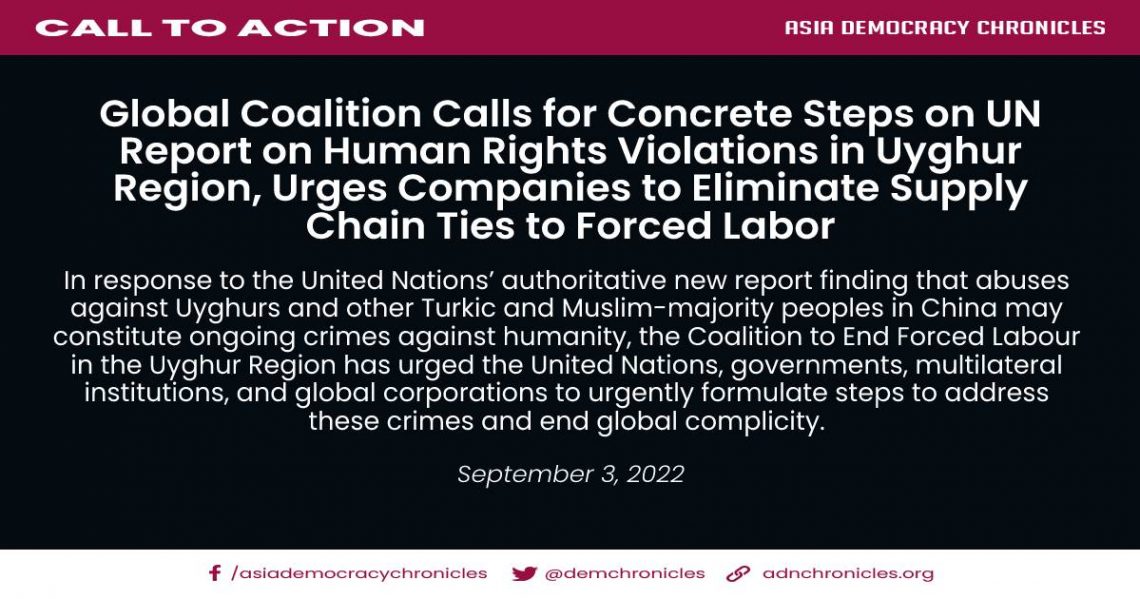 In response to the United Nations’ authoritative new report finding that abuses against Uyghurs and other Turkic and Muslim-majority peoples in China may constitute ongoing crimes against humanity, the UN, governments, multilateral institutions, and global corporations should detail urgent steps to address these crimes and end global complicity, said the Coalition to End Forced Labour in the Uyghur Region. The UN High Commissioner for Human Rights’ long-anticipated report demonstrates the urgent need for all companies with global sourcing operations to eliminate Uyghur forced labour from their supply chains.

The report finds that “the extent of arbitrary and discriminatory detention” of Uyghurs and other Turkic and Muslim-majority peoples, within the context of other restrictions and deprivation, “may constitute international crimes, in particular crimes against humanity.”

“For many years, we have been providing evidence to the world about Uyghur forced labour in China. After four years, the United Nations has finally recognised what’s going on in our homeland. Now that the report is out, we need immediate action from governments and businesses,” said Elfidar Iltebir, President of the Uyghur American Association.

Following the release of the report, the Coalition calls on the Office of the High Commissioner for Human Rights to set forth clear and practical recommendations for corporations, governments, and multilateral bodies to take strong action to combat the violations taking place in the Uyghur Region and ensure consumers and constituents are not being exposed to goods tainted by forced labour. The next High Commissioner must keep pressure on China to make clear the UN’s commitment to ending the abuses against the Uyghur people in China. They should prioritise and uphold meaningful engagement with civil society, human rights defenders, and victims of violations, to fulfil their role as the world’s leading human rights advocate.

This year, the ILO’s Committee of Experts and the Committee on the Application of Standards raised serious concerns with the exaction of forced labour of Uyghur workers in China. With regard to labour, the UN’s report reinforces the pointed observations and conclusions of the ILO’s supervisory bodies. The Coalition urges the ILO to take note of this most recent report and to press the government of China to comply with all relevant ratified conventions, including Convention 111 and Convention 122. While the two forced labour conventions that China has just ratified have not yet entered into force, we note that the government has a pre-existing obligation to prohibit forced labour as an ILO fundamental principle.

“A key finding in the report is the acknowledgment that atrocity crimes may have been committed. A formal legal determination must now be pursued by member states. In keeping with their commitment to combat modern slavery, businesses should exit the Uyghur Region, as anything and everything could be tainted by forced labour,” said Rushan Abbas, Executive Director of the Campaign for Uyghurs.

The UN report calls on businesses to respect human rights, through “enhanced due diligence” and to “strengthen risk assessment”. However, the report makes clear that credible due diligence is impossible in the Uyghur Region due to pervasive surveillance, coercion, and restrictions on Uyghur workers. While the report falls short of calling on governments to ban the import of products made with Uyghur forced labour, the US has already done so through the Uyghur Forced Labor Prevention Act (UFLPA). The Coalition calls on other governing bodies to adopt similar laws and urges the European Commission to fulfil its commitment to introduce an instrument to effectively ban products made by forced labour from entering the EU market. The Coalition continues to call on companies to refrain from re-exporting any goods denied entry to the US under the auspices of the UFLPA and attempting to sell in other markets.

“The UN report calls on business to take all possible measures to respect human rights. Given the abuses documented, this can only be achieved by ending business relationships with companies linked to the Uyghur Region and the forced labour system,” said Joanna Ewart-James, Executive Director of Freedom United.

The Coalition urges world leaders to continue to press Chinese authorities to bring about the end of the systematic forced labour of Uyghur workers and refuse to accept their denial of the abuses taking place in the Uyghur Region.

The UN report, which details government-sanctioned abuses against Uyghurs and other Turkic and Muslim majority peoples, comes after previous urging from the Coalition for its release.

Subsidized fuel hike may put RI at risk of stagflation