UN Secretary-General Guterres says Pakistan’s flooding is a signal to the world to step up action against the climate crisis, while Türkiye sends more planes carrying relief supplies to Karachi.

byTRT World
in Statements
Reading Time: 2 mins read
A A
0 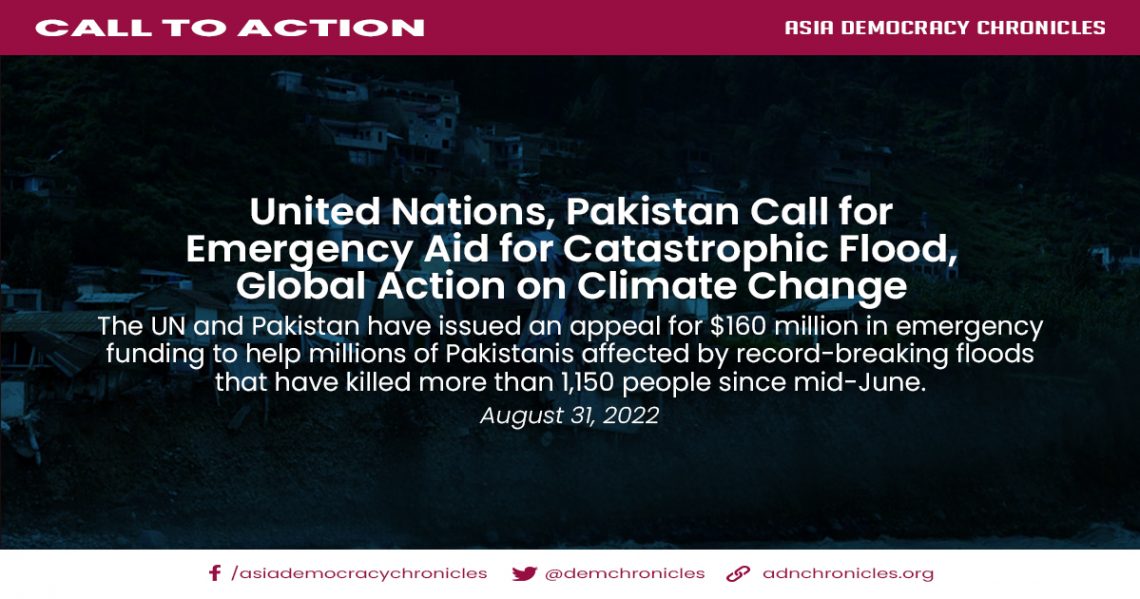 The United Nations and Pakistan have issued an appeal for $160 million in emergency funding to help millions affected by record-breaking floods that have killed more than 1,150 people since mid-June.

UN Secretary-General Antonio Guterres said on Tuesday that Pakistan’s flooding, caused by weeks of unprecedented monsoon rains, were a signal to the world to step up action against the climate crisis.

“Let’s stop sleepwalking toward the destruction of our planet by climate change,” he said in a video message to an Islamabad ceremony launching the funding appeal.

“Today, it’s Pakistan. Tomorrow, it could be your country.”

The most destructive monsoon spells in Pakistan’s recent history, combined with raging floods, have ripped away mountainsides, ripped building foundations off, and inundated over 70 districts, turning them into inland rivers.

Constant rains and raging floods have also destroyed a large chunk of the country’s infrastructure and agricultural lands, including hundreds of roads and bridges, and washed away nearly a million animals.

According to the meteorological department, the South Asian country, which is among the top 10 nations in the world vulnerable to the climate crisis, has received over 200 percent more rains this year than average monsoon showers.

With the latest arrivals, a total of six aircrafts loaded with relief items from Türkiye have landed in Karachi over the past three days, said Cemal Sagnu, the Turkish Consul General in Karachi.

Türkiye’s Disaster and Emergency Management Authority (AFAD) is set to establish a tent village in the Badin district of southern Sindh province for 400 affected families, complete with kitchen and hygiene kits and other facilities.

The Turkish Red Crescent is already on the ground in southwestern Baluchistan, one of the hardest-hit provinces, providing clean water and food to thousands of flood-affected people. #

Gas stations run out of fuel in southern Vietnam