From Palestine to India, Meta must step up and protect the rights of the global majority 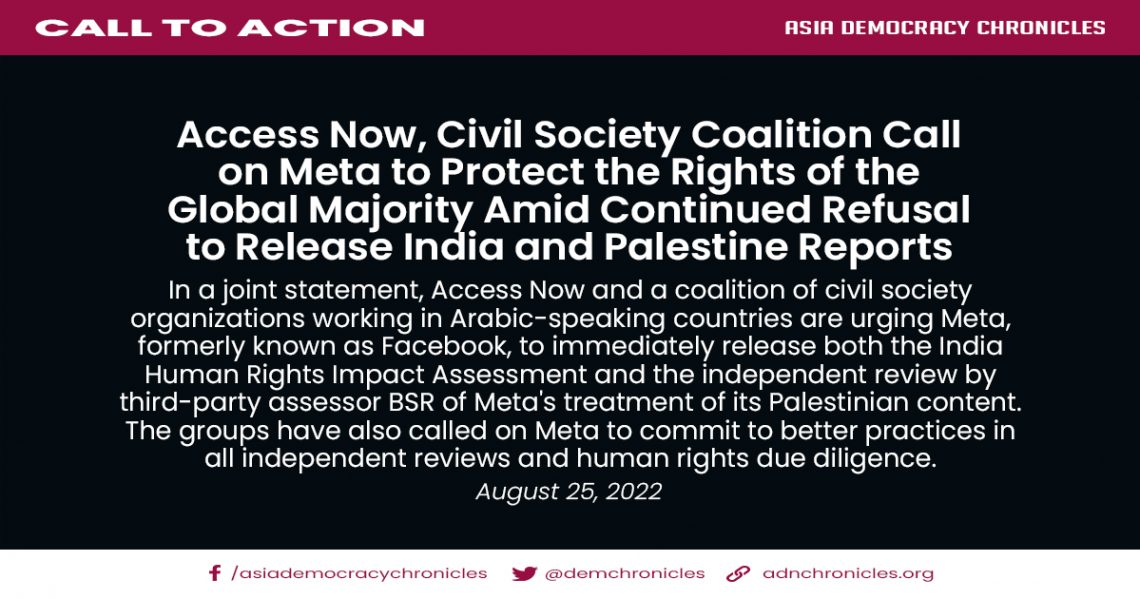 Meta must take responsibility and be held accountable to its actions — it’s time to bring its human rights reviews into the public eye. The company’s refusal and failure to release the full independent India Human Rights Impact Assessment (HRIA) report sets an alarming precedent for the long-awaited and twice delayed independent review of Meta’s content suppression of Palestinian voices, commissioned by BSR, a non-profit organization focusing on business and human rights. Access Now and a coalition of civil society organizations working in Arabic-speaking countries demand, via a joint statement, the immediate release of both the India HRIA report and Palestine’s BSR report.

“Meta must be held accountable for the harms it continues to inflict on marginalized and oppressed communities,” said Marwa Fatafta, MENA Policy and Advocacy Manager at Access Now. “Failing to publicly release its India and Palestine reviews shows Meta’s blatant disregard for human rights and utter disrespect for the global majority.”

Civil society working in Arabic-speaking countries, which has long faced roadblocks attempting to engage with Meta on protecting and respecting human rights, stands in solidarity with civil society in India and calls on Meta to stop evading responsibility. Access Now actively works in the Middle East and North Africa and Asia Pacific regions. Since May 2021, Access Now and partners have documented and reported content that was unjustly taken down, and campaigned for better practices and transparency around Palestine and Israel only to see the report delayed.

“For too long, the Arabic-speaking world has been an afterthought for social media giants across the globe,” said Kassem Mnejja, MENA Campaigner at Access Now. “Like many other regions that make up the global majority, we’re vilified or ignored. We share the frustration of Indian civil society, demand that our rights are upheld, and call for the release of both the India and Palestine reviews.”

Meta’s treatment of the India HRIA and BSR reports cannot become the norm. The labor of civil society to call attention to Meta’s failures cannot be ignored. Meta must do better, starting by: