The continued presence of the U.S. military in Okinawa has given rise to a segment of the prefecture’s population in constant search of identity: the Amerasians.

With Okinawa Governor Denny Tamaki now set to run for re-election this September, there is no doubt that much of his campaign would again revolve around the U.S. military bases in the Japanese prefecture.

Tamaki is a known critic of the bases, which occupy some 15 percent of the land area in the prefecture’s main island in southernmost Japan. More recently, he has been at the forefront of the opposition to the relocation of Air Station Futenma to Henoko, a less populated area in Okinawa that is considered as pristine by environmentalists and where the waters are known to shelter at least 262 endangered species.

Yet even if the bases were to be shut down and relocated outside of Okinawa, the prefecture would still be left with more than memories of the U.S. military: thousands of Amerasians, including the 64-year-old Tamaki himself.

The term “Amerasians,” coined by the late Nobel Prize for literature awardee Pearl S. Buck in the aftermath of World War II, generally refers to the children of U.S. service personnel and Asian women. Aside from Japan, they can be found in the Philippines, Laos, Vietnam, Cambodia, Thailand, and Korea. Although there is no official tally of the Amerasians in these countries, they are believed to be at least in the tens of thousands in total.

In Japan, most Amerasians are assumed to be in Okinawa, where more than 70 percent of the U.S. bases in the country are located. But while many of them have little or no knowledge of their foreign fathers, who either abandoned their mothers or died in combat, Amerasians in Okinawa are inevitably linked by locals to the bases, which have long been unwelcome in the prefecture. In far too many cases, this has led to discrimination against the Amerasians and their mothers.

Malia Abraham Higa, for example, says that she was bullied in her youth for being a “child of the enemy.” Now 55 and the mother of five children, she says that she still does not feel she is seen as Okinawan.

“My goal is to raise public awareness of our dilemma,” says Higa, who has recently started to publicly share her experiences as a child of a U.S. military serviceman and an Okinawan. “We want to win respect as belonging to the Okinawan community even though we have fathers who were foreign.”

Suzuyo Takazato, co-director of the Okinawa Women Act Against Military Violence, says that the quest for a personal identity remains one of the most poignant stories of the Amerasians. She also observes: “Seventy-seven years have passed since the end of World War II, but the U.S. bases continue to impact the identity especially of Okinawan women and mothers who married or were abandoned by U.S. servicemen they loved.” 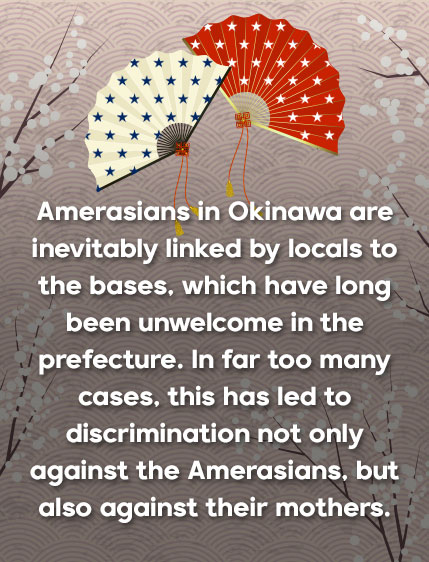 This year marks the 50th anniversary of the return of Okinawa to Japan by the United States. But more than a century ago, Okinawa was an independent kingdom with indigenous culture. A chain of lush islands collectively known as Ryukyu, it was annexed by the Japanese in the 1800s.

The islanders faced enormous suffering during World War II when the now-defunct Japanese military stationed soldiers on the territory to protect the mainland from attacks by the Allied Forces. Indeed, Okinawa became the site of a brutal three-month land battle fought in April 1945 against the Allied Forces. By the time Japan surrendered and World War II ended, 150,000 civilians, or more than a third of Okinawa’s population then, were dead.

In 1952, Japan signed a peace treaty with the United States. But the pact restored only the mainland`s sovereignty. Okinawa would remain occupied by U.S. forces until 1972, the year it was finally returned to Japan.

However, Okinawans have continuously complained of unfair treatment by mainland Japan, including having their opinions on matters that affect them ignored. High on their complaint list are the U.S. bases, which Japan pays millions of dollars for each year. While the mainland views the arrangement as a security strategy, it places a heavy burden on the local population. Recent polls reveal that more than 80 percent of Okinawans are opposed to the presence of U.S. bases in the prefecture.

It’s not hard to see why. In an article posted on Aug. 1 by the research website Foreign Policy in Focus, Kozue Akibayashi of the Women’s International League for Peace and Freedom in Kyoto and Suzuyo Takazato pointed out, “The U.S. military stationed in Okinawa continues to be a source of insecurity for the people of Okinawa. PFOS and PFAS, toxic materials with possible carcinogenicity used for fire extinguishers by the U.S military, [were] found outside the military bases and even in the drinking water. Troops have been arrested for drunk driving and crimes against the local population. Service members have committed sexual assaults. U.S. military aircraft drop their parts and other materials in civilian residential areas. Stray munitions have damaged civilian homes.”

Higa says that at the very least, the younger generation of Okinawans is now generally more open toward mixed-race children. But whenever there are issues with either U.S. service personnel or the U.S. bases, she says that those like her still tend to feel defensive given their identity links with the U.S. military.

She concedes, though, that it was far worse during the U.S. occupation, when the Americans were the masters in Okinawa and the local population was emerging from poverty and the devastation of the war. Discrimination then was rife against children born to local women called the “pan pan girls” referring to the liaisons they had with U.S. servicemen who were still seen as “enemies.”

Moreover, many Amerasians were stateless at the time since Japan did not extend nationality to children with foreign fathers. But the children could not be U.S. citizens either; their fathers had gone missing and therefore their paternity could not be proved. It was not until 1985 when the law was revised, and the child of at least one Japanese parent was considered legally Japanese.

In search of fathers

It did not help, though, that the looks of Amerasians are dead giveaways that they had foreign blood. Higa, who looks very Asian, is nevertheless fairer than the average Okinawan —  something that she says she now gets complimented on. But when she was younger, she says, her grandmother with whom she lived would often comfort her after she would arrive home crying from taunts in school and on the streets.

“Yet the biggest blow to me was the psychological shock that tore me apart after watching the photos of the Okinawan war,” says Higa, who at 10 years old was told by her mother that her father was a U.S. soldier. “During school trips, when we were taken to peace exhibitions, I always felt faint when seeing photos of Americans burning houses and arresting locals. It was so hard to accept the fact that my father was among those responsible for the killings.”

According to Higa, the U.S. military has not been helpful to those searching for clues about their fathers. She says that the pain she felt when she was rejected by her father was reignited when she went to a meeting as a representative of Amerasians searching for information about their own fathers. U.S. military authorities told them that private information cannot be disclosed. Higa says simply, “Our meetings at the U.S. bases were often tense given the lack of support for our cause.”

In her case, a torn postcard with a U.S. address that had been kept by her mother became an important lead in her quest to find her father.

“I got a friend to write an English letter to the address asking to meet my father,” she recounts. Her American grandparents replied and invited her to the United States. But when the then 17-year-old Higa finally came face to face with her father, who had married and started another family, she says that “he continued to refuse to acknowledge me.”

“I returned home angry and sad,” recalls Higa. “Years later he wrote to me asking to meet. But this time, I rejected his offer.”

Her father’s attitude probably made Higa more resolute in being seen as Okinawan first and foremost. Such is her resolve that she has not even considered enrolling her children in Okinawa’s popular AmerAsian School. The school supports a double education — and double identity — primarily for children with a foreign parent, aiming to empower them. Although Higa says one reason is that she cannot afford the tuition there, she also firmly says that she identifies as Okinawan.

“I continue to fight for my rights as a person proud of my ancestry,” Higa says. “I belong to Okinawa and want the rest of Japan to be aware that people whose fathers are nationals of the past enemy country must be treated equally.” ●

China’s farmers struggle to save crops as heatwave, drought drag on

China's farmers struggle to save crops as heatwave, drought drag on

Low driver pay is the root cause of taxi crisis