The mind-boggling rise of a dictator’s son

Many Filipinos are still in shock over the rise to power of the son and namesake of the late dictator Ferdinand Marcos. A look at how his family regained political control in the clan’s traditional bailiwick may provide insights on how that victory was made possible.

nce it became clear that Ferdinand “Bongbong“ Marcos Jr. was the winner in the May 9, 2022 Philippine presidential elections, the country’s social media began to buzz with reminders for people to start downloading material on what happened during the administration of his father, the late dictator Ferdinand Marcos.

The older Marcos ruled the Philippines from 1965 to 1986. He and his family, along with scores of their friends, were chased out of the country during a popular uprising against his regime. The former strongman died in exile in 1989. The rest of the Marcoses were eventually allowed to return to the Philippines a few years later, but few Filipinos at the time expected they would be able to rise to power again.

Now, with the 64-year-old Marcos Jr. as the new Philippine president, the fear among many Filipinos is that the rule of his father — which included nine years of martial rule — would undergo “revisions” or get “cleaned up.”

Yet, in at least one corner of the country, nothing of the sort will ever have to take place. That’s because in Ilocos Norte, the traditional stronghold of the Marcos clan, older residents remember the Marcos years as a “Golden Era,” when world-class infrastructure could be found even in remote villages in the province, there was peace and order, and food was in abundance.

Many Ilocano children also graduate from high school having no idea that the Philippines was once under martial law. Even the province’s high school teachers say that they are unaware of the atrocities that happened during this period, when more than 2,300 Filipinos were killed by state actors. “They only told us about the date martial law was declared, nothing else,” says one former social studies teacher who graduated from the Mariano Marcos State University, named by the older Marcos after his own father.

Meanwhile, those who do know of the human rights abuses during the martial rule justify them as the consequence rebels had to face for taking up arms against the Marcos government. As for the corruption that was prevalent during the Marcos regime, it is explained away as not really involving the Marcoses, who many Ilocanos believe were already wealthy, to begin with. 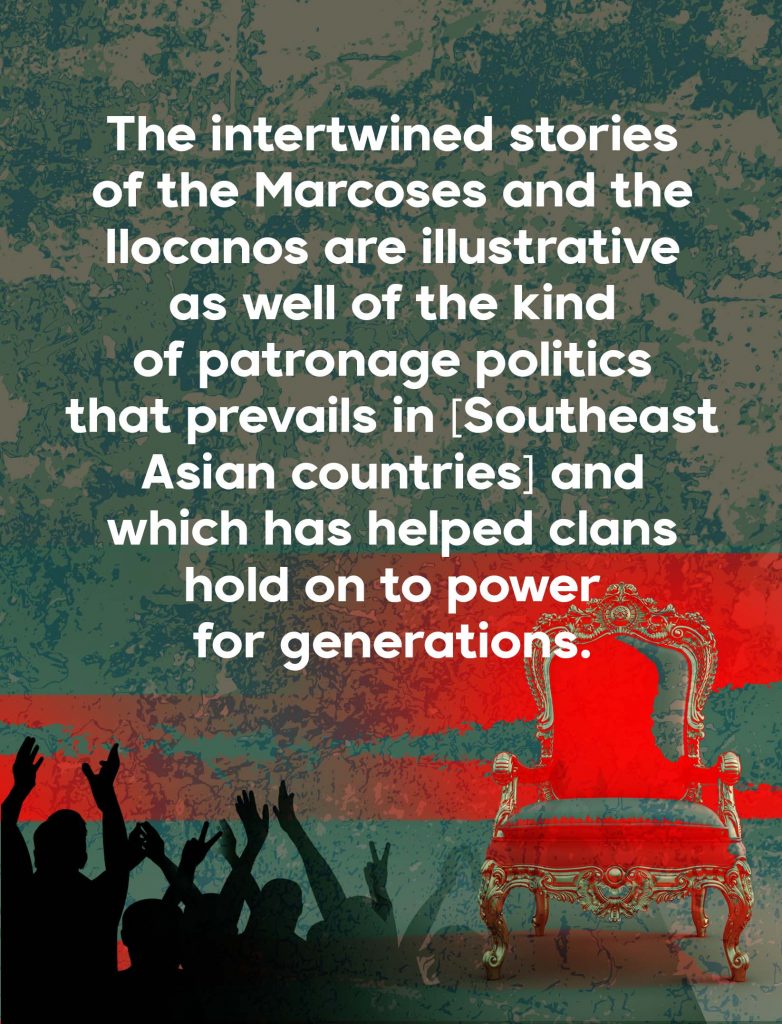 In truth, while Marcos Jr. was able to clinch the country’s highest post with the help of a massive troll army that carried out a relentless disinformation campaign and an alliance with another formidable political clan — the Dutertes of Davao — his victory is also due to the strength in numbers from his clan’s bailiwick in the nine northern provinces, the so-called “Solid North.” The Ilocanos, the main ethnic group in most of these provinces, and the third largest in the Philippines, can also be found elsewhere across the country. They make up about nine percent of the Philippine population of 112.5 million, which translates into more than 10 million people.

The intertwined stories of the Marcoses and the Ilocanos are illustrative as well of the kind of patronage politics that prevails in the Philippines and in other countries in Southeast Asia, and which has helped clans hold on to power for generations. As Asian Studies Professor James Chin of the University of Tasmania observed recently in an article on Southeast Asian political families, “(Political) dynasties are created, and often accompanied by formalities steeped in custom and traditional political culture. They are nothing to do with meritocracy. In Southeast Asia, it’s often linked to ‘patron-clientism,’ where a powerful person (patron) and a follower (client) mutually benefit from the relationship.”

Aid in exchange for political support?

In regionalistic Philippines, the “benefits” include bragging rights for having a president from one’s province or ethnic group, as well as more tangible ones, such as convention centers (even if these are in the middle of nowhere) and handouts in cash or in kind.

In Ilocos Norte (pop. 600,000), a scholarship program run by the provincial government has even morphed into one supposedly sponsored by the Marcoses. At least it seems that way, with a recent distribution of the scholarship grants held up by the slow arrival of politicians, among them freshman Congressman Ferdinand Alexander “Sandro“ Marcos III, son of Marcos Jr.

The young beneficiaries are also asked to bring their parents on distribution days, a mechanism that obliges them to feel indebted to the Marcoses for the “financial aid.” Says a grantee of the province’s Sirib scholarship program who declines to be named: “I see the politicians only on stipend distribution days during the election. No reminder that the scholarships are from the people’s taxes.”

She adds, referring to the Marcoses, “They tend to credit-grab.”

One example of that is the claim of Marcos Jr. that — as he asserted during his inaugural speech — he “built” the famous windmills in Bangui, Ilocos Norte, implying in the process that he is a green energy advocate. Yet while it is true that the windmills were built during one of his three terms as the province’s governor, they were a private-sector initiative. Moreover, in 2010, Marcos Jr. had even called the windmills an “impractical answer to a very practical problem” and remarked that “essentially, it is a commercial enterprise.”

The energy produced by the windmills is also delivered straight to the national grid, and it does not make up 40 percent of Ilocos Norte’s power supply, contrary to the claims of Marcos Jr.’s older sister, Senator Imee Marcos.

Imee herself has sat as governor of Ilocos Norte. Her most popular projects were one-day events sold as “cultural festivals,” many of which are still held to this day. While Ilocos Norte remains a sleepy province where shops close at five p.m. and the streets are empty by eight, the Marcoses somehow deem it appropriate to keep holding grand spectacles there. One example is the yearly Tan-ok Festival. During the festival, each of the province’s 21 municipalities and two cities is required to stage a dance performance designed to outdo the last with extravagant costumes, towering props, and an overabundance of fanfare. Ilocanos are also notorious for being frugal, yet a single performance can cost each town PHP1 million (US$18,000).

For all that, only one of the nine Solid North provinces did not vote for Marcos Jr. for president last May: Batanes, where most residents are ethnic Ivatan.

A young man who was vilified in social media for openly supporting Marcos Jr.’s main rival for the presidency, former Vice President Leni Robredo, says of his fellow Ilocanos, “They always see the Marcoses everywhere. They are used to them so they don’t want you supporting another politician. They want you to support them because ‘we know them.’”

The other political clan

For sure, though, the Marcos clan is not the only political family in the province. While the Marcoses were in exile, the Fariñas family rose to become the most powerful political clan in Ilocos Norte.

The Fariñases were the “thorn” that prevented the returning Marcoses from consolidating their power in that part of the country. Once allies, the two families were soon engaged in a tug of war for political power.

The Fariñases were the only ones “capable of running an equally powerful political family like the Marcoses,” says lawyer and political scientist John Paul Castro. But in trying to defend their political base in the 2022 polls, the Fariñases had to face the formidable machinery and resources of their rival clan. Veteran politician Rudy Fariñas, who ran against and eventually lost to Imee’s son Matthew Marcos-Manotoc in the recent gubernatorial race, accused the Marcoses of masterminding the “pattern of harassments” his clan and its supporters experienced in the runup to the elections.

Aside from their campaign managers and supporters receiving death threats, Fariñas said that local police kept getting in their way during the campaign. Search warrants were used and weaponized against their supporters — acts likely sanctioned by the Marcoses, said Fariñas during a press briefing three days before the May 9 polls.

But the Marcoses distanced themselves from the allegations, with Marcos-Manotoc saying that he does not “endorse such behavior.” The police, for their part, said that the accusations were “baseless and unfounded” and none of their acts were “politically motivated.”

On election day, Fariñas claimed that the Marcoses had been using divisive tactics to ensure their grip on the province. He said that all mayors in the province were now “beholden” to the Marcoses and had been threatened that they would be suspended from office should they withdraw support for the Marcos family. Village captains were not spared, according to the Fariñas patriarch, as those who would not support Sandro Marcos were allegedly told they would not be allocated any budget should he win as the first district representative.

And yet, Fariñas said that he could not throw his support behind any presidential candidate other than Marcos Jr. He pointed out that his family’s situation was complicated as their voters’ base in the province was also backing Marcos Jr.

“You know how it is,” Fariñas said. “Whether we like it or not, we are regionalistic. And we vote for someone from our place.”

In the end, the two warring political families said that they were willing to let go of whatever ill will they developed toward each other during the 2022 campaign. Fariñas said that he would be “reconciliatory” toward the Marcoses. His rival Marcos-Manotoc said, “If there’s any way we could work together for Ilocos Norte, why not?”

All of the top posts in the province are now controlled by the Marcoses, and most of the mayors from the 23 towns and cities are also their allies. And with another Marcos now occupying the Presidential Palace, many Ilocanos are looking forward to what they say will be another “Golden Era” — at least for them. ●

Allie Katherine Dumlao is a content development strategist for US-based small to medium-sized businesses. Darren Datu Belisario is a lawyer and correspondent for national broadsheets. Raisa Neith Salvador is a social worker and former advocacy researcher with the Ateneo School of Government. Deyniel Corpuz Cadavona is a campus journalist who’s currently studying Management Economics at the University of the Philippines.

Why was rich, developed Seoul so unprepared for this year’s monsoon rains?

Get approval for any media article before publication, NITI Aayog tells its officials