byReuters
in Statements
Reading Time: 5 mins read
A A
0 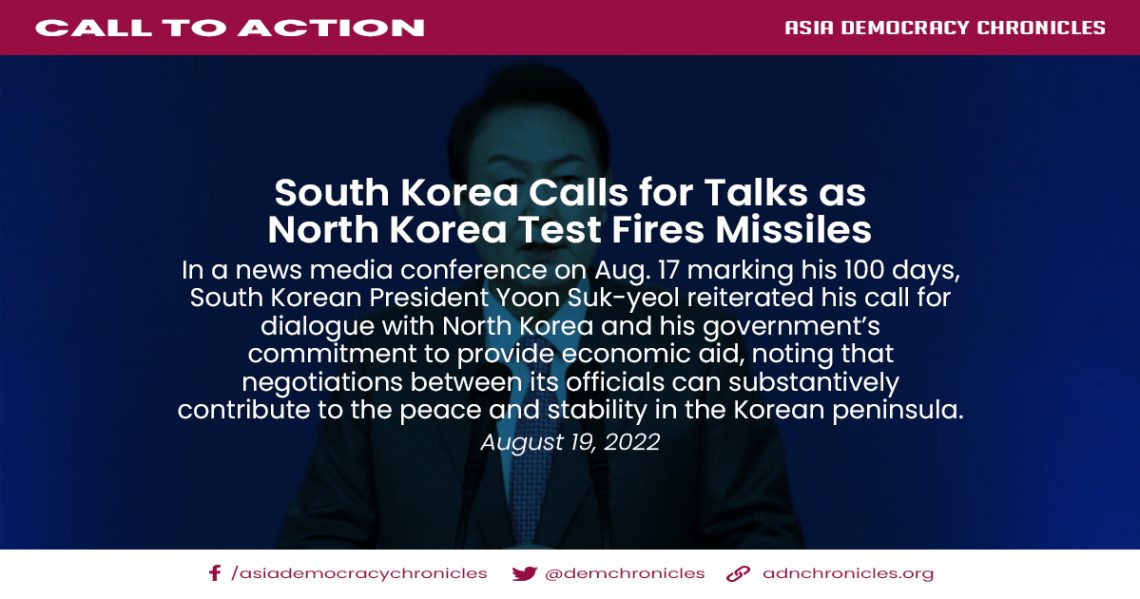 SEOUL, Aug 17 (Reuters) – Talks with North Korea should not be for political show but contribute to establishing peace, South Korean President Yoon Suk-yeol said on Wednesday, just hours after the North test fired two cruise missiles into the sea.

Speaking at a news conference to mark his first 100 days in office, Yoon made no mention of the launches, which were only publicly reported later by the South Korean military.

Yoon repeated his willingness to provide phased economic aid to North Korea if it ended nuclear weapons development and began denuclearisation, noting that he had called for a dialogue with Pyongyang since his campaign.

“Any dialogue between the leaders of the South and North, or negotiations between working-level officials, should not be a political show, but should contribute to establishing substantive peace on the Korean peninsula and in Northeast Asia,” he said.

Despite those meetings, denuclearisation talks stalled in 2019 and North Korea has said it will not trade away its self-defence, though it has called for an end to sanctions. It has been observed preparing for a possible nuclear test, which would be its first since 2017.

North Korea’s launches on Wednesday were the first reported in months, and were a day after South Korea and the United States began preliminary joint drills ahead of a restart of live field training halted under Moon. read more

A Pentagon spokesman declined to comment on what he called “an alleged cruise missile launch,” but said the United States remained focused on coordinating closely with allies and partners to “address the threats” posed by North Korea.

Yoon said South Korea was not in a position to guarantee the North’s security if it gave up its nuclear weapons, but Seoul did not want a forced change in the status quo in the North.

The North’s missile tests and nuclear development has revived debate over whether the South should pursue its own nuclear weapons. Yoon said that he was committed to the Treaty on the Non-Proliferation of Nuclear Weapons (NPT) and working with the United States to boost its “extended deterrence” for South Korea.

“The NPT should not be abandoned and I will adhere to that until the end,” he said.

Facing falling opinion poll numbers and controversies over his picks for top ministers, Yoon was pressed by media on a range of issues including labour reform, housing shortages, and recovery from flooding this month.

Since Yoon took office in May, two strikes have cost industry more than $1.6 billion, according to labour ministry and shipbuilder estimates, although neither involved a government suppression before ending. read more

The president said he would always allow time for dialogue and compromise before suppressing an illegal strike.

Yoon called for ending discrepancies between “workers who do the same job”, such as between direct hires and contract workers, without elaborating on how.

He declined, however, to say whether his government would change its policy of not directly providing lethal aid to Ukraine as it defends itself following Russia’s invasion nearly six months ago.

“While it’s difficult to elaborate here on the issue of supplying military support, we will help the Ukrainian people recover freedom and rebuild the destroyed national assets swiftly,” Yoon said.

He said he believed that historical disputes with Japan dating back to its colonial occupation of the Korean peninsula from 1910-1945 could be overcome and that the two countries needed to cooperate more closely on supply chain and economic security. #

Afghanistan: One Year of Taliban Takeover, Standing in Solidarity with People of Afghanistan and Calling for Accountability Against Taliban