byTRT World
in Statements
Reading Time: 2 mins read
A A
0 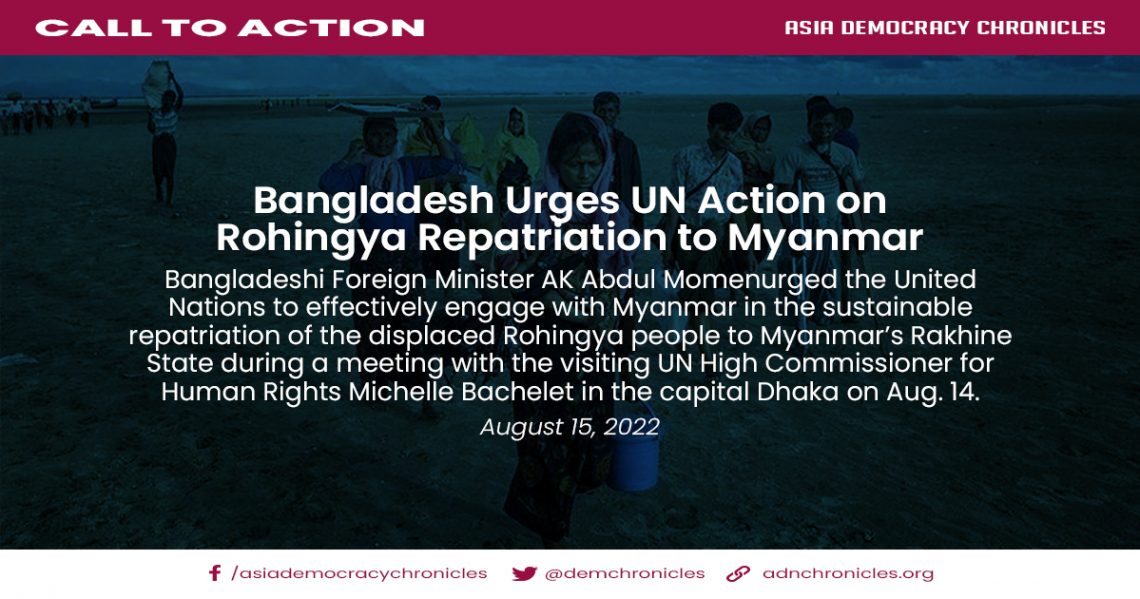 Bangladesh has urged the United Nations to effectively engage with Myanmar in the sustainable repatriation of the displaced Rohingya people to their home country of Myanmar’s Rakhine State.

“Protracted stay of the displaced Rohingya in Bangladesh bears the risk of the spread of radicalism, transnational crimes, etc., and thus may hamper regional stability,” the statement quoted Momen as saying.

Claiming that the Bangladesh government has been taking good care of the persecuted Rohingya since the very beginning and even during the pandemic by providing vaccines, Momen urged the UN system, including UNDP, “to undertake projects in Rakhine to create a conducive environment for the return of the Rohingya.”

Bachelet assured the host country of the “UN’s continued efforts to realise the safe and voluntary return of the Rohingya to Myanmar.”

But for a better and conducive life in Bangladesh until the peaceful repatriation, she underscored the need for their (Rohingya) “education through fully operationalising the learning centres in the camps,” the statement added.

The issues discussed during her meetings with the high officials include Bangladesh’s controversial Digital Security Act (DSA) which the critics have marked as “a draconian law” enacted before the 2018 general election to politically harass the opposition voices.

Huq, however, told the UN rights chief that the act was enacted to combat cybercrimes.

The UN human rights chief arrived in Bangladesh in the morning on a 4-day official visit to assess the state of human rights in the South Asian nation and monitor the plight of the persecuted Rohingya community.

This is the first-ever official tour of any UN rights chief to Bangladesh, a country of more than 165 million people.

During her tour, Bachelet will meet Bangladeshi Prime Minister Sheikh Hasina, her Cabinet and members of the civil society.

She will also interact with the National Human Rights Commission in Bangladesh and youth representatives.

Also on the agenda are meetings with Rohingya refugees in the border district of Cox’s Bazar.

Bangladesh is currently hosting more than 1.2 million Rohingya, most of whom fled a brutal military crackdown in the home country of Myanmar’s Rakhine state in August 2017. #