New Report Reveals Unauthorised and Unsafe Use of Chlorpyrifos and Other Hazardous Pesticides in India, demands stringent action

New report reveals serious problems of pesticide usage in India and points to poor regulation of hazardous agrochemicals. The current use pattern is implicated in widespread unauthorised uses of chlorpyrifos, fipronil, atrazine and paraquat in India, posing threat to food safety and environmental contamination. 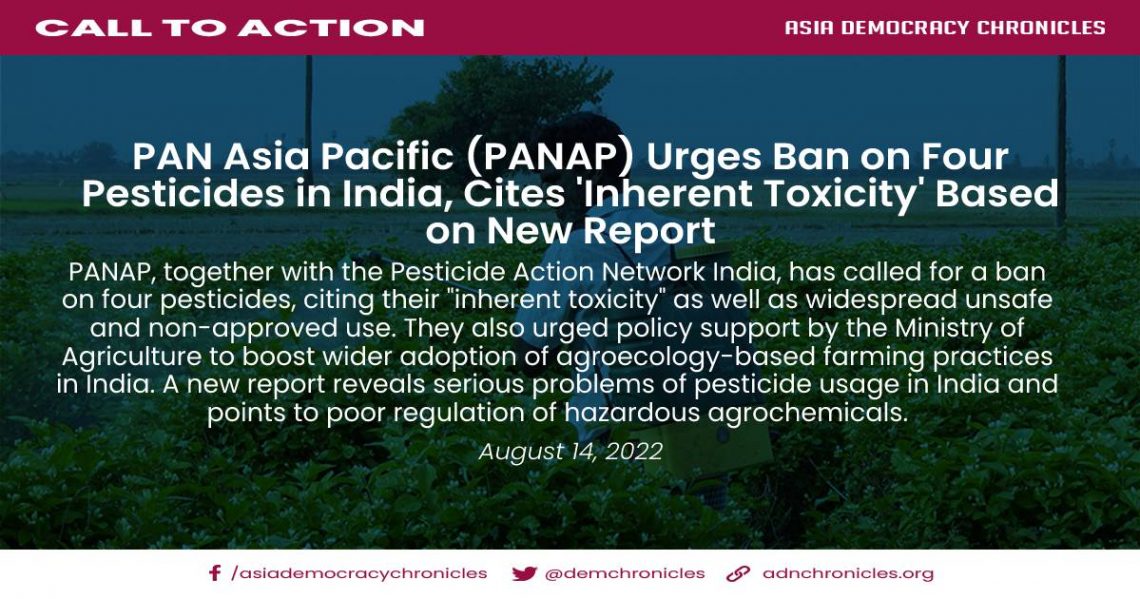 Thrissur: A new report titled ‘State Of Chlorpyrifos, Fipronil, Atrazine And Paraquat Dichloride In India’ is released in a workshop titled ‘Hazardous Pesticides in India: Health and Food Safety Concerns’ organised at, the PWD mini conference hall, Thrissur, reveals a dangerous situation of use and regulation of four pesticides in India. This research report was developed by Pesticide Action Network India, a national non-profit organisation, exclusively working on pesticide related issues in the country. This report addresses regulation and use of four highly hazardous pesticides (HHPs) in India based on field study conducted in seven Indian states, Andhra Pradesh, Jharkhand, Himachal Pradesh, Karnataka, Tamilnadu, Telangana and West Bengal. This study gathered information on pesticide usage and health effects from 300 respondents including farmers, farm workers and pesticide retailers.

The report is released by Dr. P. Indira Devi, ICAR Emeritus Professor, Kerala Agriculture University. ‘Health is wealth and there is only “ONE HEALTH” which is solely dependent on the quality of ecosystem services. Unscientific use and handling of chemical  pesticides  makes the ecosystem unhealthy.  We have to go for science based policy decisions and its strict implementation coupled with demand side management through educating the society’ said, Dr. Indira devi. ‘The use of HHPs and  its ecosystem and human health damages from across the world, can be a pointer  in decision making  apart from the laboratory level impact data . The proposed Pesticide Management Bill, though  an improvement over the 1968 Insecticide Act, needs modifications to make the  goal of sustainable agriculture achievable. The Bill which has been in discussion needs to be presented and passed, as well’ she added.

While these four pesticides are approved for use in India for specific crop-pest combinations, the study uncovered numerous unapproved uses in food and non-food crops. Chlorpyrifos is approved for 18 crops in India, while this study found its use in 23 crops. Fipronil is approved for nine crops and field use was recorded for 27 crops. Similarly, atrazine and paraquat dichloride are approved for one and 11 crops respectively, field uses have been noted in 19 and 23 crops respectively. Of serious concern is that the study uncovered agriculture departments/universities and pesticide industry recommending unapproved uses. These high numbers of non-approved uses pose serious questions on the safety of agricultural produce and environmental contamination. The Maximum Residue Level (MRL) for agriculture produce is monitored based approved uses and therefore, non-approved uses are largely remain unmonitored for MRLs which is a serious food safety concern domestically, as well as it pose treat to international trade of agriculture commodities.

This study noted various problems related to pesticide usage in the field that results in exposure and poisoning, including lack of training on use and safety precautions, inadequate storage of pesticide containers, use of faulty/leaky spraying equipment, and non-availability of recommended safety gear. Inadequate labelling practices such as small font sizes, which make it difficult to read the information on labels and leaflets and poor information on safety measures and PPE, along with unsafe handling of empty containers, were also noted. Dr. Indiradevi opined, “we should have properly trained and lisenced force for pesticide application which has to be governed by agriculture department as well as local self governments. As pesticide use results in considerable environmental pollution, monitoring by local authorities  is required. Drones are extensively used in agriculture presently. The use of drones in chemical pesticide application needs to be allowed only after scientific studies on aspects related to drift, height, spray particle size, etc., and its potent environmental damages.”

‘About 40 percent of total registered pesticides in India qualifys to be categorized as highly hazardous pesticides owing their potential to cause health environmental damages. Pesticide use and practices documented in this study indicate serious lacuna in regulation and accountability, as the use is happening in violation of national approved use.  This points to poor governance of pesticide management in India that results in exposure of farmers and workers, contamination of agricultural produce and environmental pollution.  About 20% farmers and 44% farm workers participated in the study reported exposure and ill health.  While the farming community is often blamed for indiscriminate, injudicious and unsafe use of pesticides, it needs to be realized that safe use of hazardous pesticides can never happen in the given the agroeocological and climatic conditions in India’, said A. D. Dileep Kumar, CEO of PAN India, and author of the report.

This report recommends banning the four pesticides considering their inherent toxicity as well as the widespread unsafe and non-approved use. It further recommends expanding the monitoring of pesticide residues in farm produce and environmental samples to understand the level and extent of contamination. Moreover, it demands the Ministry of Agriculture to foster a paradigm shift with policy support to boost wider adoption of agroecology-based farming practices in India.  ‘PAN India believes that this report will help state level and national authorities in India to come up with stringent regulatory measures including banning of pesticides to protect farming communities, consumers and the environment from harmful effects of toxic agrochemicals’, added Dileep Kumar.

The workshop discussed various aspects of pesticide regulation and use, and raised concerns over contamination food resources by toxic pesticides and possible health impacts.  Dr. Lalitha Vijayan from Salim Ali Foundation, Illias KP from Organic Farming Association of India, and Asokakumar from Kerala Jaivakarshaka Samithi actively participated in the discussion.  They emphasised the need of concerted efforts from both Union and state governments in terms of policy and implementation to reduce use of hazardous pesticides and promote agroecological-farming methods.#

Bangladesh fuel prices: 'I might start begging in the street'