‘Democracy Must Go On:’ Protestors Have Three Demands for Thailand’s Government

byThe Thaiger
in Statements
Reading Time: 3 mins read
A A
0 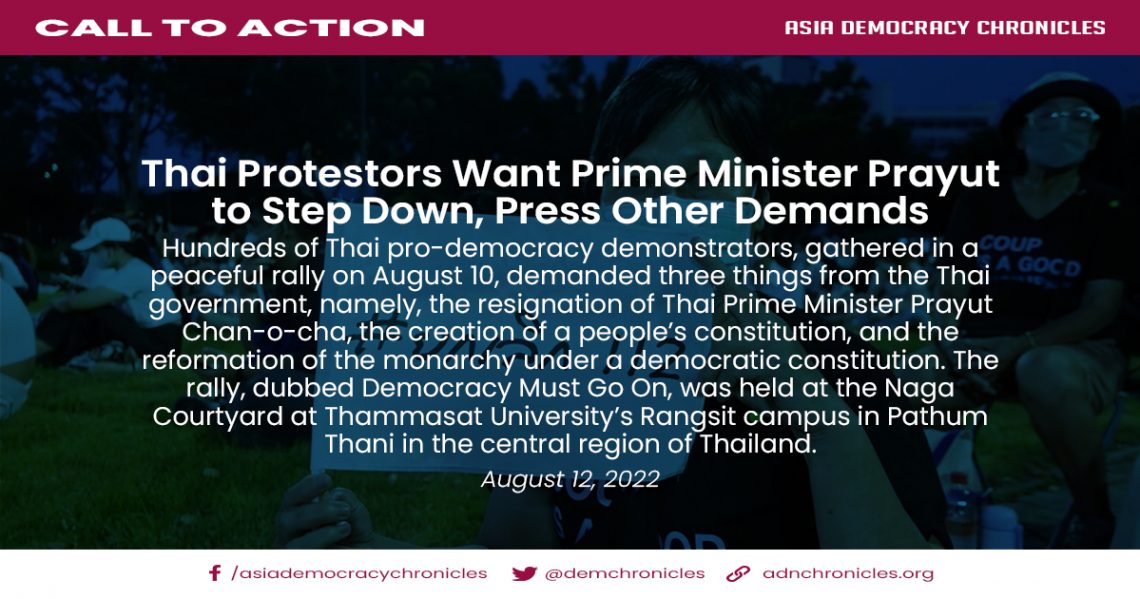 Hundreds of pro-democracy demonstrators from all over Thailand gathered at the Naga Courtyard at Thammasat University’s Rangsit campus in Pathum Thani yesterday to join a peaceful rally hosted by the student council, entitled ‘Democracy Must Go On.’

The protest marks two years since the August 10, 2020 protest held in the same place, in which ten demands for reform of the monarchy were made.

Given the violence, use of water cannons and tear gas used against protestors by police at pro-democracy rallies in Bangkok in 2021, protestors prepared for the worst, especially since public gatherings are currently banned under Thailand’s extended “Emergency Decree.”

An emergency tent was set up at the rally in case of injuries and information about what to do if things took a turn for the worse circulated on social media before the event.

But the atmosphere at the “mob” was anything but violent. Most demonstrators sat on picnic blankets on the grass, waving flags, holding signs, intently listening to activists as they made speeches on stage, and holding up a three fingers salute when prompted. At the back of the crowd, masseuses offered Thai massages for 100 baht.

Isaan-born activist Kiattichai Tangpornphan took to the stage and asked the crowd, “Is this a peaceful protest?” “Yes!” they replied. “Do you want to know why this protest is peaceful?” he asked.

“This protest is peaceful because the police aren’t here! Protests can be safe when there are no police!” Cheering erupted from the crowd.

A few police officers were dotted around the campus, but much to protestors’ surprise – no tear gas, no water cannons, no weapons, and no riot police were present.

One protester told the Thaiger what brought them to the rally…

“Today marks two years since the August 10, 2020 protest when the power of the people was taken to a new level. We are still protesting against the military which is leading our country. Everyone knows that in the past eight years the military has been in power, but nothing has improved. Things have taken a turn for the worse. The economy is going downward, the quality of life is going downward, but the cost of living is going up. Things are going badly, so we need to march.”

However, demonstrators predict that PM Prayut could find a loophole to try and hold his position for longer, e.g., by claiming his premiership began in 2017 when the military-appointed senate voted him in. The same year, PM Prayut introduced a new constitution, which is not accepted by demonstrators.

“Having been an unsuccessful prime minister for eight years, it’s time to give the power back to the people. You fraudulently wrote your own constitution, caused everything to collapse, and now the smell of the people’s blood fills the air. Thailand will rise up and resist your power.”

Another protester told the Thaiger…

“I am here to protest Section 112. The government doesn’t let people criticise the monarchy. Also, I want the laws abolished which allow the military government, who took power by a military coup in 2014, to make changes to the constitution anytime they want.”

A stall was set up at the rally for people to sign a petition calling for the abolition of Section 112 of Thailand’s Criminal Code, also known as lèse majesté law. The law stipulates that anyone who defames, insults or threatens the royal family faces between three to 15 years in prison on each count.

“We have come here today for the mob, to fight democracy, but also to promote gender equality. It is part of the same movement. If we fight for democracy but overlook gender equality, we will never have a society which is safe for everyone.”

On August 23, the leader of the “Red Shirts” (National United Front of Democracy Against Dictatorship) will hold a rally on Ratchadamnoen Road in Bangkok calling for PM Prayut to stand down.

The rally will occur the day before PM Prayut should stand down after completing two concurrent four-year terms, as per the constitution. #

Indian cultural diplomacy - and creation of a South Asian identity