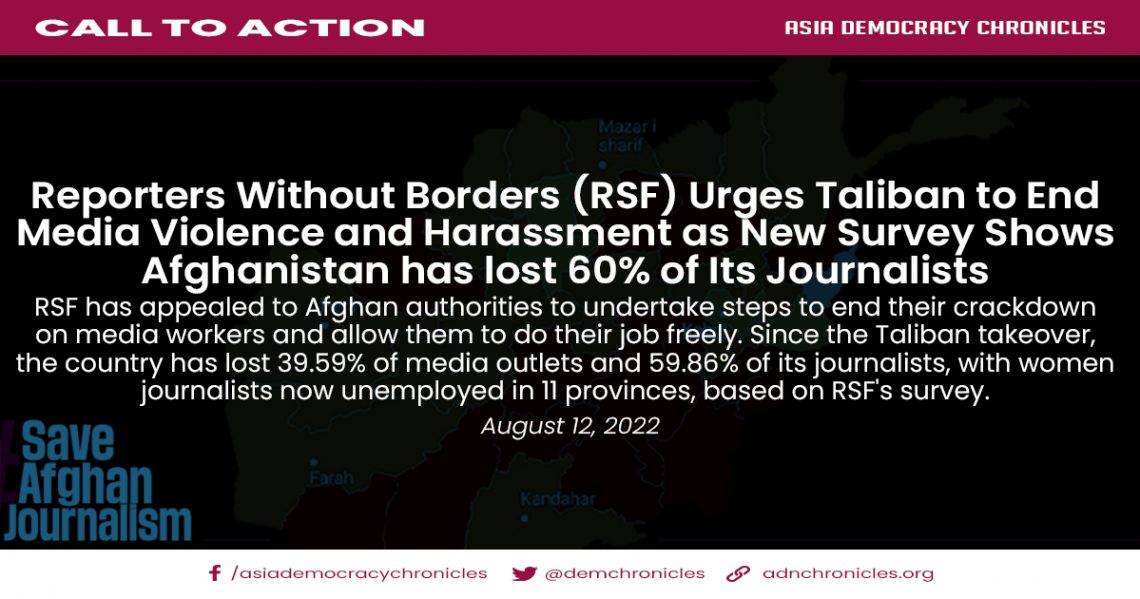 According to a Reporters Without Borders (RSF) survey, in the year since the Taliban took power on 15 August 2021, Afghanistan has lost 39.59% of its media outlets and 59.86% of its journalists, especially women journalists, three quarters of whom are now unemployed and no longer exist in 11 provinces. All this has happened amid a deep economic crisis and crackdown on press freedom.

RSF’s survey leaves little doubt about the massive impact that the fall of Kabul and the creation of the Islamic Emirate of Afghanistan have had on the media. Afghanistan had 547 media outlets prior to 15 August 2021. One year later, 219 ceased their activities. And of the 11,857 journalists tallied prior to 15 August 2021, there are only 4,759 now. Women journalists have been impacted most – 76.19% of them have lost their jobs.

“Journalism has been decimated during the past year in Afghanistan,” RSF secretary-general Christophe Deloire said. “Media and journalists are being subjected to iniquitous regulations that restrict media freedom and open the way to repression and persecution. The authorities must undertake to end the violence and harassment inflicted on media workers, and must allow them to do their job unmolested.

Women have suffered most in the carnage inflicted on Afghan journalism in the past year and have disappeared completely from the media landscape in 11 of Afghanistan’s 34 provinces – Badghis, Helmand, Daikundi, Ghazni, Wardak, Nimroz, Nuristan, Paktika, Paktia, Samangan and Zabol. Of the 2,756 women journalists and media workers employed in Afghanistan prior to 15 August 2021, only 656 are still working. Of these, 84.6% are working in the Kabul region.

One year after the fall of Kabul, 76.19% of women journalists are no longer working in the country. Accusations of “immorality or conduct contrary to society’s values” are widely used as pretexts for harassing women journalists and sending them home. This traditionalist worldview in the new Islamic Emirate of Afghanistan’s official discourse resulted in women TV presenters being made to cover their faces while on camera.

“They work in physically and mentally violent conditions”

Bibi Khatera Nejat, a journalist who has fled to Pakistan, described the conditions that drove her into exile.

“I worked for Radio Hamseda in Takhar province for seven years,” she told RSF. “Of course, during this period, like all women journalists in the provinces, especially those who work for radio and TV, I was subjected to harassment. Several times I was even threatened, but at least we were able to resist. On 8 August 2021, the Taliban entered the city.”

Nehat added:” One of the first things they did was destroy media equipment and shut down media premises. With my family, we fled our home and sought refuge in Kabul. But after the fall of Kabul on 15 August, there was no longer any hope. After staying a little longer, I finally left the country. I am now in Pakistan but in an even more difficult situation economically, and with no way out. The embassies do not respond to our visa requests. A year later, we have been forgotten by the international community.”

Some Afghan women journalists are still resisting in conditions that are dramatic. They include Meena Habib, the director of RouidadNews, a Kabul-based news agency that she created after 15 August 2021.

“I preferred to stay in my country to report the news and to defend what women had achieved during the past 20 years,” she told RSF. “The living and working conditions of women journalists in Afghanistan have always been difficult, but today we are experiencing an unprecedented situation. Women journalists, those who have the opportunity to work, also work for a wretched salary. They do their duty to report the news on an empty stomach. They work in conditions that are physically and mentally violent and tiring, without any protection. Today, all the associations defending journalists’ rights are made up entirely of men, and work for men!”

59.86% of Afghan journalists no longer working

All journalists, both men and women, have been hit by the regime change and have seen their numbers plummet. A total of 7,098 journalists are no longer working, including 54.52% of male journalists.

Of the 9,101 men practicing journalism before the fall of Kabul, 4,962 are no longer working. This drop is correlated with the fall in the number of active media outlets throughout the country as a result of the increased persecution and the deep economic crisis.

Afghanistan has lost 39.59% of its media outlets in a year

The media landscape has been heavily impacted by the Taliban takeover. Although four new media outlets have been created since 15 August 2021, Afghanistan has lost 219 of the 547 media outlets it used to have.

The provinces that have suffered the biggest falls (falls of more than 50%) are Balkh, Bamyan, Panshir, Parwan, Takhar, Herat and Faryab.

The Kabul region in the centre of the country, which had the biggest number of media outlets – 133 – has also been hit hard by the regime change and has lost nearly half of them. There are only 69 operating now.

In some provinces, the requirement to replace music or news programmes with religious content has led some media to stop broadcasting. But new economic constraints, such as the termination of international or national funding and the fall in advertising revenue as a result of the economic crisis, have also led some media to cease operating.

According to the United Nations Development Programme, Afghanistan has lost 700,000 jobs while the proportion of Afghans beneath the poverty threshold is likely to reach 97% this year. These factors compound the impact of the draconian regulations and the failure to respect Afghanistan’s own press freedom law.

Taliban supreme leader Mullah Haibatullah Akhundzada issued a new decree on 22 July warning that “defaming and criticising government officials without proof” and “spreading false news and rumours” are forbidden under Islam and that those who “slander” government employees are unwittingly collaborating with the enemy and will be “punished.” This announcement by the Islamic Emirate’s highest official is indicative of the determination to suppress press freedom in Afghanistan.

Other regulations decreed by various Taliban bodies with the purported aim of defining the rules governing press freedom were already restricting journalistic activity. The “11 Journalism Rules” announced by the Government Media and Information Centre (GMIC) on 19 September 2021 had already opened the way to censorship and the persecution of journalists. The vaguely worded “11 rules” state that “matters that could have a negative impact on the public’s attitude or affect morale should be handled carefully when being broadcast or published” and that media outlets must “prepare detailed reports in coordination with the GMIC.” The nature of these “detailed reports” was not specified.

A decree issued on 22 November by the Ministry for the Promotion of Virtue and Repression of Vice – which is responsible for ensuring respect for the Sharia in the public domain and enforcing the Koranic doctrine of “enjoining good and forbidding wrong” – said commentators who could criticise the government should not be interviewed by journalists or invited on to their TV programmes.

Finally, an information and culture ministry decree on 28 March banned privately-owned TV channels from retransmitting news programmes provided by international broadcasters – BBC, Voice of America and Deutsche Welle – in local languages. All these decrees violate the media law that was promulgated in March 2015 although, when questioned by RSF in February, government spokesman and deputy information and culture minister Zabihullah Mujahid claimed that this press law was still in effect.

These regulations have resulted in an increase in censorship and media self-censorship and an increase in arbitrary arrests of journalists. Since 15 August 2021, at least 80 journalists have been detained for periods of varying lengths by the security forces, especially by the Istikhbarat (intelligence services), which have been involved in most of the arbitrary arrests of journalists – some of them violent – since the start of 2022.

Three journalists are currently imprisoned in Afghanistan – for endangering the country’s security, according to the Taliban. Only one has been tried. It is Khalid Qaderi, a poet and journalist with Herat-based Radio Norroz, who received a one-year prison sentence from a military court on 7 May 2022. The other two are Mirza Hassani, the owner of Radio Aftab in Daikundi province, who was arrested on 22 May 2022, and Abdul Hanan Mohammadi, a Kapisa-based reporter for the Pajhwok news agency, arrested on 12 June 2022. Both are being held pending trial.

Since 15 August 2021, RSF has also registered at least 30 cases of journalists who have been the direct victims of violence by the security forces in the course of their work. Mujahid, the Taliban spokesman, did not respond to RSF’s questions. For their part, the leaders of the new journalists’ organisations set up under the aegis of the Taliban – which are part of the new Federation of Journalists and Media of Afghanistan – emphasised the progress they have made in their negotiations with the government.

Hafizullah Barakzai, the head of the Council of Journalists in Afghanistan, identified the economy as the most important problem, and said, “the number of cases of violence has decreased compared with recent years, despite the increase in threats during the first months after 15 August.”

The head of the Afghanistan Media Organisation, Abouzar Sarem Sarepole, pointed out that the figures for arbitrary arrests of journalists vary according to the organisations, because “some do not specify the reason for the arrest” and consider that “certain journalists were not arrested because of their journalistic activities.”

Both Barakzai and Sarepole said they think the reinstallation of the Media Offences Verification Commission – which they expect to take place soon – could prevent arbitrary arrests and governmental intervention in press matters. This commission –  whose creation was one of the provisions of the 2015 press law – is meant to deal with complaints against journalists and media outlets. Under the 2015 law, complaints are supposed to be transferred to a court only if the commission so decides.

This optimistic take on the commission is not shared by Zia Bumia, who was a member of the former Federation of Journalists and Media of Afghanistan, the one that existed before the Taliban takeover. He said the commission will be unable to perform its role properly, above all because it will not include representatives of the independent human rights commission, which the Taliban suspended.

Speaking on condition of anonymity, a Kabul-based journalist working for a national media outlet acknowledged that “recognition of the 2015 press law is a significant advance for journalists in Afghanistan,” but said it would not suffice because the situation has deteriorated so much.

He added: “Half of the journalists have left the country, most of the media still operating are in a terrible economic situation and will probably go out of business, the pressure on the media and official censorship are stifling, and the situation is even worse in the provinces than in Kabul. More than a law, we need a desire to help the media and to respect press freedom at the highest level of government, above the information and culture ministry.”

In 2012, Afghanistan was ranked 150th out of 179 countries in RSF’s Press Freedom Index. By 2021, it had risen to 122nd out of 180 countries thanks to a dynamic media landscape and the adoption of legislation protecting journalists. And in 2022, after losing nearly 40% of its media and more than half of its journalists, it has fallen to 156th. #