He underscored that countries with nuclear weapons must commit to the “no first use” of them. 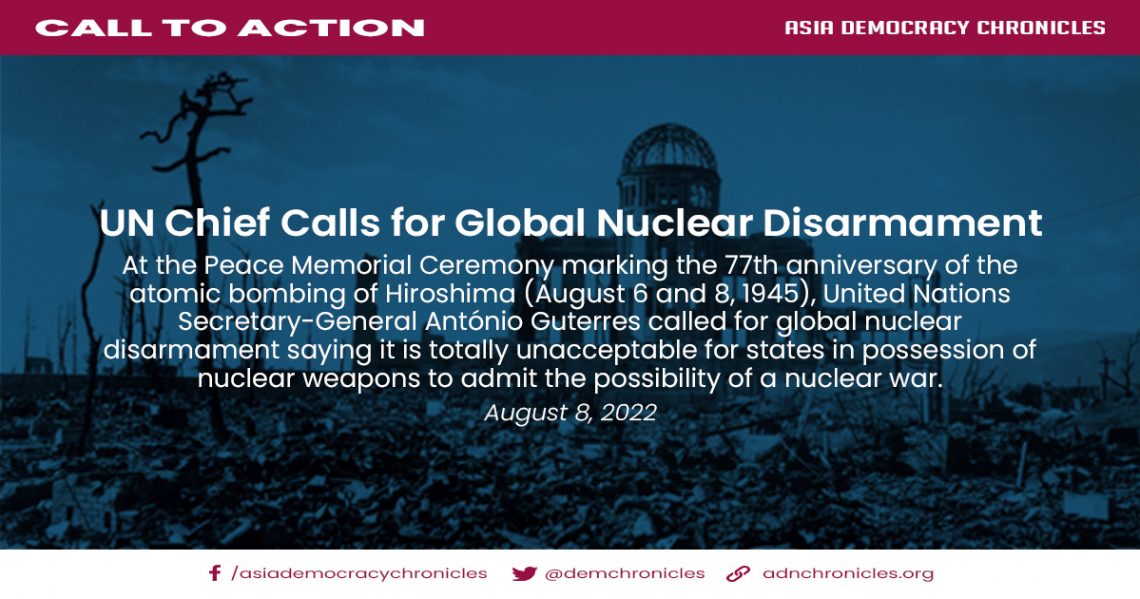 The UN Secretary-General, António Guterres, on Saturday called for global nuclear disarmament, saying it is totally unacceptable for states in possession of nuclear weapons to admit the possibility of a nuclear war.
Mr Guterres said this in Japan at a Peace Memorial Ceremony, marking the 77th anniversary of the atomic bombing of Hiroshima.

“Nuclear weapons are nonsense. Three-quarters of a century later, we must ask what we’ve learned from the mushroom cloud that swelled above this city in 1945,’’ he said in a statement.

The secretary-general warned that a new arms race is picking up speed and world leaders are enhancing stockpiles at a cost of hundreds of billions of dollars with almost 13,000 nuclear weapons currently held in arsenals around the world.

“…Crises with grave nuclear undertones are spreading fast — from the Middle East to the Korean peninsula, to Russia’s invasion of Ukraine… Humanity is playing with a loaded gun,” he cautioned.

Mr Guterres called the ongoing Review Conference of the Treaty on the Non-Proliferation of Nuclear Weapons in New York a ‘sign of hope.’

“Today, from this sacred space, I call on this Treaty’s members to work urgently to eliminate the stockpiles that threaten our future, to strengthen dialogue, diplomacy and negotiation, and to support my disarmament agenda by eliminating these devices of destruction,” he said.

He underscored that countries with nuclear weapons must commit to the “no first use” of them, and assure other states that they will not use – or threaten to use — nuclear weapons against them.

“We must keep the horrors of Hiroshima in view at all times, recognising there is only one solution to the nuclear threat: not to have nuclear weapons at all,” the UN chief said.

Guterres emphasised that leaders could hide from their responsibilities.

“Take the nuclear option off the table — for good. It’s time to proliferate peace. Heed the message of the hibakusha: “No more Hiroshimas! No more Nagasakis!”, he said, recognising that in 1945, two atomic bombs were detonated over the skies of Japan – first in Hiroshima on 6 August and Nagasaki three days later, on 9 August.

Mr Guterres also sent a message to the young people urging them to finish the work that the hibakusha had begun.

“The world must never forget what happened here. The memory of those who died — and the legacy of those who survived — will never be extinguished,” he said.

The secretary-general also met five surviving victims of the atomic bombs in Hiroshima and Nagasaki, known as Hibakusha, and heard their stories.

He expressed his admiration for them, acknowledging that they had suffered enormously but had overcome trauma with ‘enormous courage and resilience.’

Mr Guterres also called them an example for the world, and told the three women and two men reunited with him that they have the moral authority to tell leaders that ‘nuclear weapons are nonsense’.

“The UN is committed to keeping the memory of what happened alive, and to make sure that your stories echo forever,” he said.

The hibakusha told the UN chief how they had remained engaged in issues of peace and disarmament for most of their lives, noting that for example, one of them wrote a song to raise awareness and another illustrated her experiences in pictures.

They all expressed their desire that young people also understand the crude reality of nuclear weapons.

He spoke about the current state of the world, including the triple planetary crisis, the raging inequality, and widespread armed conflict. #