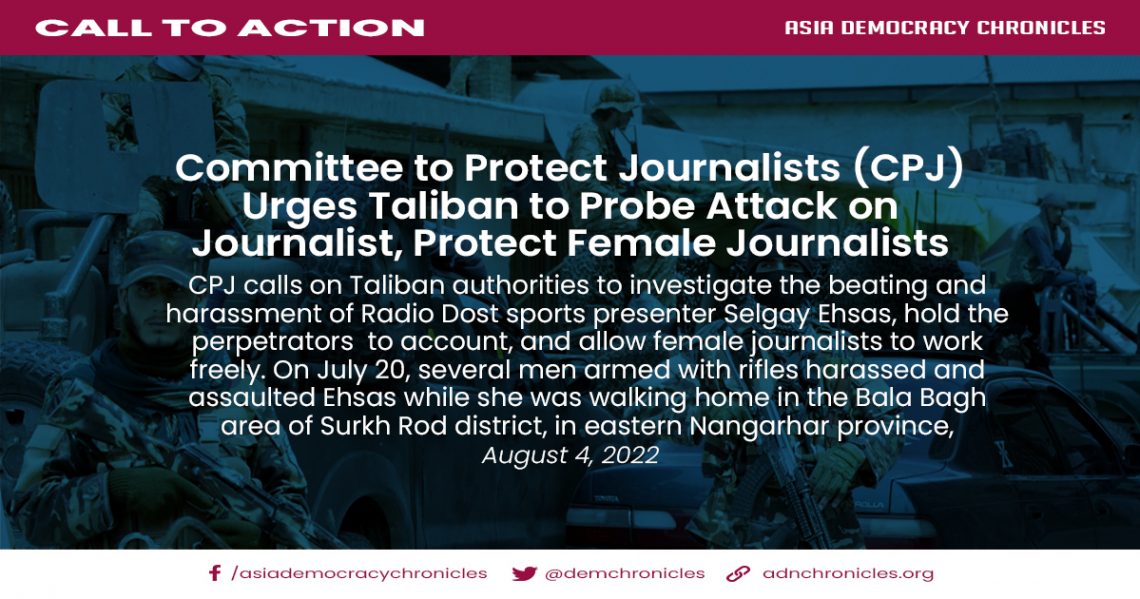 On July 20, several men armed with rifles approached Ehsas, a sports presenter with the independent broadcaster Radio Dost, while she was walking home in the Bala Bagh area of Surkh Rod district, in eastern Nangarhar province, according to news reports and the journalist, who spoke to CPJ by phone.

The men fired a gun into the air and identified themselves as “Mujahedin,” or members of the Taliban, Ehsas said, adding that the gunshot startled her and made her drop her phone. When she went to pick up the phone, one of the men hit her on the back of the head with a heavy object that she believed was a gun, she said. Before she fell unconscious, she heard one of the men saying the attack was because she did not “sit at home despite their warnings,” according to the journalist and that report.

Locals took Ehsas, unconscious, to a clinic and later to the Fetame Zahra Public Hospital, where she received treatment for a bruised back, head pain, and dizziness, she told CPJ. She said that no items were stolen from her, and she believed the attack was reprisal for her work as a female journalist.

After the attack, Ehsas recorded an audio message describing the incident and questioning whether the Taliban supported attacks on women; she told CPJ that she shared that recording with a friend, and that it was subsequently shared on social media. Ehsas said she did not know who shared the clip online.

After that video message was published online, Ehsas and her family received threats from Taliban members, prompting them to go into hiding, the journalist told CPJ, saying that she feared for her life.

“Almost one year since the Taliban’s takeover of Afghanistan, the cycle of threats, beatings, and intimidation of journalists continues at an alarming pace,” said Carlos Martinez de la Serna, CPJ’s program director, from Madrid. “The brutal attack on Afghan journalist Selgay Ehsas, followed by Taliban members forcing her to record a video allegedly absolving the group, shows that members of the press face giant hurdles working under Taliban rule.”

On July 24, the Taliban-controlled Bakhtar News Agency said the July 20 attack on Ehsas stemmed from a personal conflict, and also published her video message, according to media reports.

In 2020 and 2021, Ehsas said she received many death threats while working as a presenter for the Nangarhar-based broadcaster Enikass Radio and TV, and in 2021, an improvised explosive device was attached to Ehsas’ family vehicle and injured several of her relatives. Ehsas was not in the car and believed the attack was retaliation for her journalism because it came shortly after the deaths of four female employees at Enikass.

The Taliban targeted Enikass because the outlet promoted freedom of speech and employed female journalists, according to an interview with the broadcaster’s owner and director, Engineer Zalmai Latifi, published by the local Subhe Kabul newspaper.

Ehsas said she received so many threats that she left Enikass in early 2021 and worked as a reporter for the independent broadcaster Shamshad TV in Kabul for five months, where she continued to receive threats, before taking a job at Radio Dost.

CPJ contacted Zabihullah Mujahid, a Taliban spokesperson, for comment via messaging app but did not receive any response.

Ehsas’ assault is the first physical attack on a female journalist that CPJ has documented since the Taliban takeover in August 2021.

CPJ is also investigating the detention and release of journalist Aluddin Erkin in northern Faryab province. #