(1st UPDATE) While President Ferdinand Marcos Jr. ordered to strengthen the country’s efforts against violence against women and children, other measures related to protecting women and LGBTQ+ remain to be seen as a priority under the Marcos administration 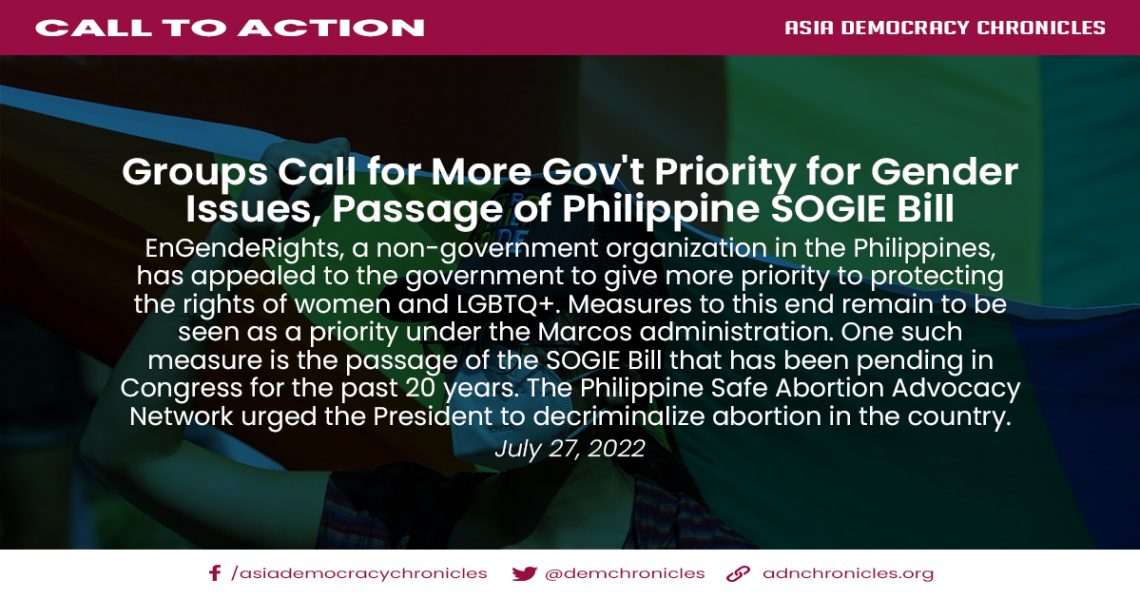 MANILA, Philippines – Priority on women and gender issues were mostly absent from President Ferdinand Marcos Jr.’s first State of the Nation Address (SONA) on Monday, July 25, a women’s rights organization and a historian pointed out.

The SONA was not completely void of women’s welfare. Marcos ordered the strengthening of programs preventing violence against women and children.

“Pagtitibayin natin ang programa sa violence against women and their children, kabilang na ang counselling para sa mga biktima, katuwang ang ating mga LGU (We will strengthen our program against violence against women and their children, including counseling for victims, together with our local government units),” Marcos had said.

Nongovernmental organization EnGendeRights said that, while it is “laudable” that Marcos mentioned violence against women, more could be done in improving enforcement and litigation processes – from training police to strengthen criminal prosecution by filing stronger complaint-affidavits, to training courts to give credibility to testimonies of survivors of gender-based violence.

“There are many perpetrators of sexual assault who are at large, and we need intensified efforts to arrest them,” said EnGendeRights executive director Clara Rita Padilla.

According to EnGendeRights, one woman is raped every hour in the country, while one out of eight women who induce abortion are rape survivors.

“I think he may have excluded some things [in the SONA] that are important also because, I know the economy is top of mind, but there is also social legislation that needs to happen,” said Leloy Claudio, historian and Southeast Asian studies professor, in a Rappler panel discussion.

In an interview with television host Boy Abunda in January, Marcos said that he was “almost certainly” in favor of abortion. “We want to save the lives of women…. As a public servant, what you are looking to [do] is to avoid all these tragedies. It affects the woman involved, it affects the entire family, generally it affects the community, it affects them for the rest of their lives,” Marcos said.

The Philippine Safe Abortion Advocacy Network (PINSAN) in a statement on Tuesday, July 26, urged the President to support his stance by decriminalizing abortion in the country.

“Marcos Jr. is faced with the opportunity to champion for women’s rights and put a stop to the thousands of preventable deaths and complications that women face because of our discriminatory laws on abortion,” said Jihan Jacob, PINSAN steering committee member.

Data gathered by PINSAN shows that the country’s restrictive abortion laws have not stopped women from trying to induce them. In 2020, there was an estimated 1.26 million Filipino women who induced abortion, and at least three women die a day from complications from unsafe abortion, according to PINSAN.

Of the 19 priority bills Marcos mentioned in the SONA, none were any of the numerous measures catering to women, children, and the LGBTQ+ community which have been lapsing in Congress.

One is the SOGIE Equality Bill, which seeks to penalize discrimination against people based on their SOGIE (sexual orientation, gender, identity, and expression). EnGendeRights called on Marcos to pay more attention to the issue, and push for the immediate passage of the bill.

“LGBTIQ people suffer discrimination and violence at the very hands of their own parents and family, their schools and employers, and in their own communities. They are subjected to rape, torture, murder, violence, and abuse because of their SOGIE and experiences of discrimination and violence also lead to suicides of LGBTIQ people,” said EnGendeRights executive director Clara Rita Padilla.

The SOGIE bill has been lapsing in Congress for more than 20 years, despite the Philippines being a signatory of several international covenants vowing to safeguard the dignity of its people. Local governments, however, have been legislating their own versions.

Senator Risa Hontiveros has the SOGIE Equality bill at the top of her priority list. She and Senator Robin Padilla are also pushing for the legalization of divorce.

Padilla also listed the bill seeking to recognize civil partnerships of couples, regardless of them being the opposite or same sex, as a priority.

In recent weeks, social media users and advocates worked to take down YouTube channel “Usapang Diskarte” for producing content that objectified women and gave advice on seducing minors. This caused Hontiveros to call anew for the passage of the bill seeking to penalize online sexual exploitation of children, which was also not included in Marcos’ priorities.

During the term of Marcos’ predecessor, Rodrigo Duterte, measures related to women, gender, and family were also absent from Duterte’s priority bills. – Rappler.com