For some Sri Lankans, food is becoming a luxury

As the island nation goes through one of the worst economic crises in its history, vulnerable people are struggling to afford food.

Afew weeks ago, Nagaraja Ranjan, a resident of a village in the Western Province of Sri Lanka, hanged himself. He left behind a wife and four children. At the inquest, his wife Madasami Manjula stated to the coroner that it was very possible that the inability to feed their children drove her husband, who was the sole breadwinner of the family, to suicide.

“There was nothing to eat at home for three days, he left home to find money to feed the children,” Manjula later told Asia Democracy Chronicles.

A daily wage earner, Ranjan earned approximately LKR 20,000 (US$67) per month, but right before his suicide, he had been out of work for about a week. Says his widow: “We have loans to pay, and mouths to feed, so when he didn’t come back, I sold two chairs for LKR 5,000 (US$17) to survive.”

Now left without her husband, Manjula is not sure how she is going to feed her family. Two of her children are school-aged while the other two are still very young.

Images of abundance belie the fact that many of these items are starting to become unaffordable for many Sri Lankans. (Photos by Dimuthu Attanayake)

In Sri Lanka, the prices of essential food items have soared exponentially, making food unaffordable for people belonging to vulnerable income groups. The prices of rice, wheat flour, sugar, and lentils all indicate inflation at double-digit levels compared to last year. Bath Curry Indicator is a tracker by Advocata Institute that indicates how much it costs for a balanced meal of rice and curry, the Sri Lankan staple. The indicator shows that the cost has gone up from approximately LKR 1,000 (US$3.33 based on current exchange rates) in January 2019 to over LKR 1,500 (US$5) by February 2022.

Families belonging to vulnerable income groups already survive on one or two meals per day. Since the food prices keep increasing daily, they fear they will have to starve soon.

The island nation off the southern tip of India was already in economic crisis even before the COVID-19 pandemic hit. But the disruption of economic activities as a result of the pandemic, particularly the halting of international tourism — one of the country’s biggest foreign currency earners — flattened the local economy.

At the end of 2018, Sri Lanka posted its highest tourism revenue yet: US$4,380.6 million. With the Easter Sunday attacks of 2019 and the ongoing pandemic, however, Sri Lanka’s inflow of foreign currency has slowed down. The country of about 21.8 million people also has over US$30 billion in foreign debts due by 2026. From July 2021 to January 2022 the country committed to repayment of US$1.5 billion borrowed through international sovereign bonds, reducing the foreign reserves even more. Now the country is in a deep economic crisis.

Approximately 80 percent of the food consumed in Sri Lanka, such as rice, vegetables, meat, and fish, is produced domestically, while the rest is imported. This means that the current hike in food prices is due to both domestic and international factors.

“There are several imported items in Sri Lanka’s food basket, including products such as wheat, dhal, and milk powder, among others,” said Deshal de Mel, economist and research director at the Sri Lankan think tank Verité Research. “The scarcity of foreign exchange and depletion of the country’s foreign exchange reserves has resulted in supply disruptions for imports across the board and price escalations in these products.”

Since fresh milk is pricier in Sri Lanka, many used to depend on powdered milk as a source of dairy. But not anymore. One garment factory worker, who requested anonymity, told Asia Democracy Chronicles that she can no longer afford to buy milk powder. Even if she wanted to buy milk powder, it cannot be found in the shops.

“So we resort to plain tea,” she said, meaning tea with just sugar in it. With the rise in living costs and the increase in food prices, plain tea is turning into a main meal at the factory worker’s house. “There are so many times that I have a plain tea, or biscuits in the night and sleep without having dinner,” she said. 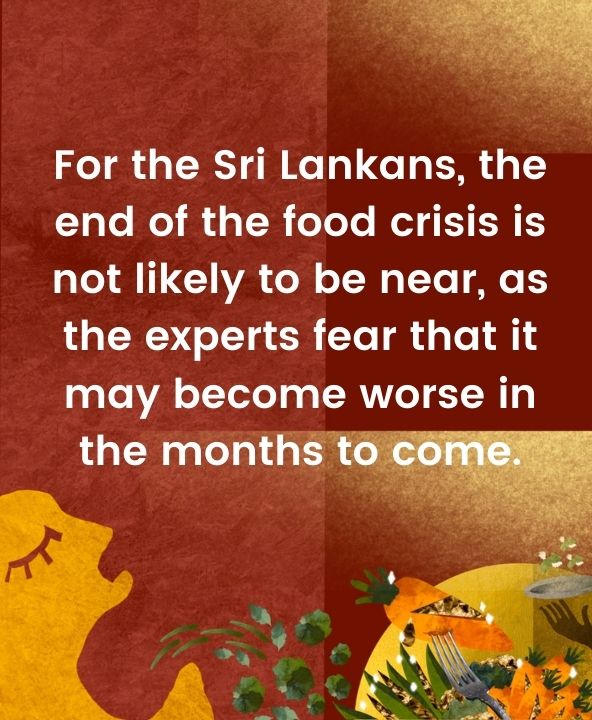 At the small garment factory where she works, there are many others who cannot afford dinner, she said. “There are plenty of workers who eat the free bun given at the factory during tea time and survive without having dinner,” said the worker.

She added that with her widowed mother dependent on her, “I starve sometimes and send her money so that she can survive.”

The anecdotal reports appearing in newspapers, as well as existing data, clearly show that there is food insecurity in Sri Lanka and that it has a disproportionate impact on the lower socio-economic groups, said Dr. Vinya Ariyaratne, president of the Sarvodaya Shramadana Movement, an organization focusing on community-led development.

“You still don’t see a very big impact when looking at the statistics, but there are very many pockets where a lot of people are suffering,” he said. “This is particularly the case in the plantation sector, and in some rural areas and low-income settlements in Colombo.”

Recently, the Sri Lankan government announced relief packages amounting to LKR 65 billion (US$217 million), with families below the poverty line receiving between LKR 1,900 (US$6.33)  to LKR 4,500 (US$15), under Samurdhi, the official social welfare scheme.

Yet, there are doubts and criticisms over the years about the effectiveness of the Samurdhi scheme. Handled at the village level, personal relations and political influence have resulted in the funds being directed away from the needy. Noted Ariyaratne: “A large proportion of people belonging to the vulnerable groups, who should be included in the Samurdhi scheme, are excluded from it.”

Policy experts believe that long-existing structural issues in domestic agriculture are contributing to the rising food prices. These include the use of traditional techniques that result in low yield and high cost of production, fragmentation of agricultural lands, smallholder farms that are not economically viable, and land degradation.

“These are chronic issues in agriculture, resulting in inadequate output in comparison to the increase in population,” says Dr. Manoj Thibbotuwawa, a research fellow at the Institute of Policy Studies of Sri Lanka. “Most of the agricultural yield levels in Sri Lanka have become a plateau except for paddy, which uses Green Revolution techniques (such as the introduction of high-yielding rice varieties), and the use of fertilizer.” 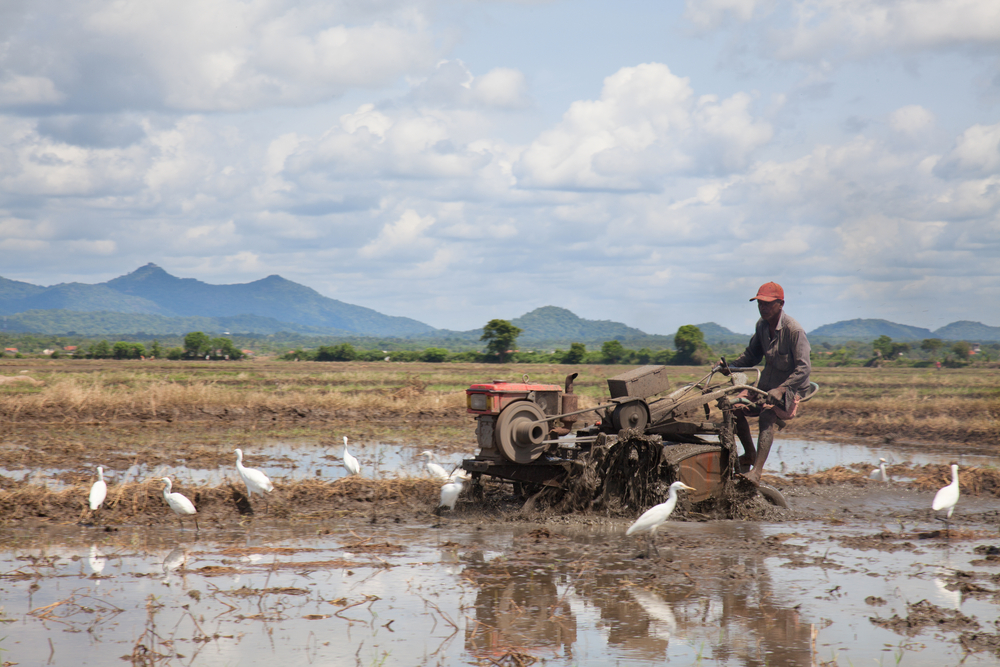 While a shift to organic agriculture is welcome, the suddenness with which it was implemented proved to be disastrous for many farmers and the country’s food supply.

In April 2021, the government took a sudden policy decision to halt the importation of chemical fertilizers in an attempt to promote organic agriculture. Thibbotuwawa believes that while turning toward organic farming is not a bad idea in itself, the immediate ban had negative effects on agricultural production. Farmers who were used to chemical fertilizers needed time to adjust to organic fertilizer, and it was also difficult to source an adequate amount of organic fertilizer.

“This decision had a significant impact on domestic agriculture,” said Thibbotuwawa. “Sri Lanka is yet to experience that impact. During the 2022 Maha season (March-April harvesting season) we would probably feel a 30 to 40 percent reduction in paddy yield.”

The increase in the international prices of imports that are agricultural inputs, such as fuel and fertilizer, have also had a large effect on the local production, said Thibbotuwawa. “The impact of oil prices is enormous because people cannot use the machinery,” he pointed out.

Ariyatne said that the government needs measures to increase food production and bring down the food prices in the medium and long term. For this to happen, he said, fundamental steps have to be taken by the government in cutting down on non-essential expenditure and increasing social security for the people.

But for the Sri Lankans, the food crisis is not likely to end soon. Experts fear that the crisis may worsen in the months to come. Inflation in both food and non-food products is likely to remain elevated over the next few months, said de Mel, adding that the impacts of supply disruptions through a drought, coupled with increasingly acute foreign exchange shortages, will continue to pressure the food prices.

“Furthermore,” he said, “exogenous factors such as the conflict in Ukraine will increase costs of fertilizer, wheat, and fuel, adding further impetus to inflation overall.”

As a short-term practical measure to address the food crisis, Ariyaratne proposes identifying the Grama Niladhari Divisions — the lowest administrative division in Sri Lanka — with the most vulnerable cases of poverty and then establishing food banks that could run for the next six months, in collaboration with government agencies, locally run civil society organizations, and nongovernmental organizations. 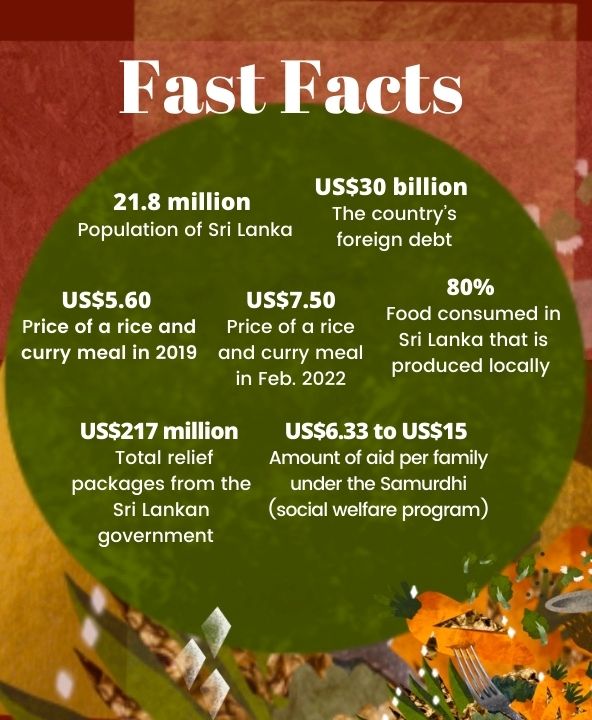 “This should be a system where better-off people and the government can donate, and vulnerable families are given a food pack using these donations, in a decentralized way,” he said.

At the government level, the immediate requirement would be to address the foreign exchange shortage so that the country is able to import food products in case of larger than expected shortfalls in agricultural production, said de Mel. “For this,” he said, “it is necessary to restructure Sri Lanka’s external debt and enter into a program with the International Monetary Fund.”

But in the medium to long-term, the country’s focus must be on enhancing agricultural productivity, to rein in the soaring food prices. “At present, the agricultural sector only accounts for around nine percent of Gross Domestic Product whilst employing 25 to 30 percent of the country’s labor force, indicating the relatively low productivity of the sector,” de Mel says.

In the meantime, Sri Lankans like K.P. Nadeeka are trying to figure out how to keep themselves fed. Nadeeka, another garment factory worker, said, “Earlier, I used to make about two or three vegetables, and cook some meat or fish to eat over the week, but now my meals have been reduced to one curry and rice.”

Cost of destruction of Goa’s ecosystem is ₹2.59 cr per hectare annually, violators to pay