Fear of being found in violation of the lèse majesté law has forced individuals and the media in Thailand into self-censorship.

In Thailand, there is the controversial and anachronistic lèse majesté law, and then there is what can be termed as “lèse majesté law-plus.” Lèse majesté law, which criminalizes anyone who defames or insults the Thai king, queen, heir apparent, or regent, now exists alongside a broader effect that goes beyond the letter of the law.

Thailand has been a constitutional monarchy since 1932. The modern form of the lèse majesté law, meanwhile, has been on the statute book since 1908. It is Article 112 of the Criminal Code, and it says, simply: “Anyone who defames, insults, or expresses malice about the king, queen, heir-apparent, or regent must face an imprisonment term from three to 15 years.”

The earlier version of the law had not specified a minimum sentence, although it said the maximum jail term would be seven years. The minimum three years and maximum 15 years imprisonment came much later, after the Oct. 6, 1976 massacre of Thammasat University students and a subsequent military coup. The massacre of unarmed youths stemmed from allegations that the students had staged a mock hanging of the crown prince, in violation of the lèse majesté law. In truth, what the students had mounted was a play protesting the hanging weeks earlier of two labor activists.

Then, as now, the strength — or flaw, depending on one’s viewpoint — of the lèse majesté law lay in the fact that it can be so loosely interpreted that it could lead to greater and unnecessary censorship and self-censorship, thus ensuring a greater climate of fear. This is lèse majesté-plus. Today it has afflicted individuals, Thais, and foreigners alike, as well as government agencies and the Thai media, rendering any open discussion and debate on the monarchy impossible in Thailand. To many Thais, it is like living in a pressure cooker without a safety valve to release the steam. 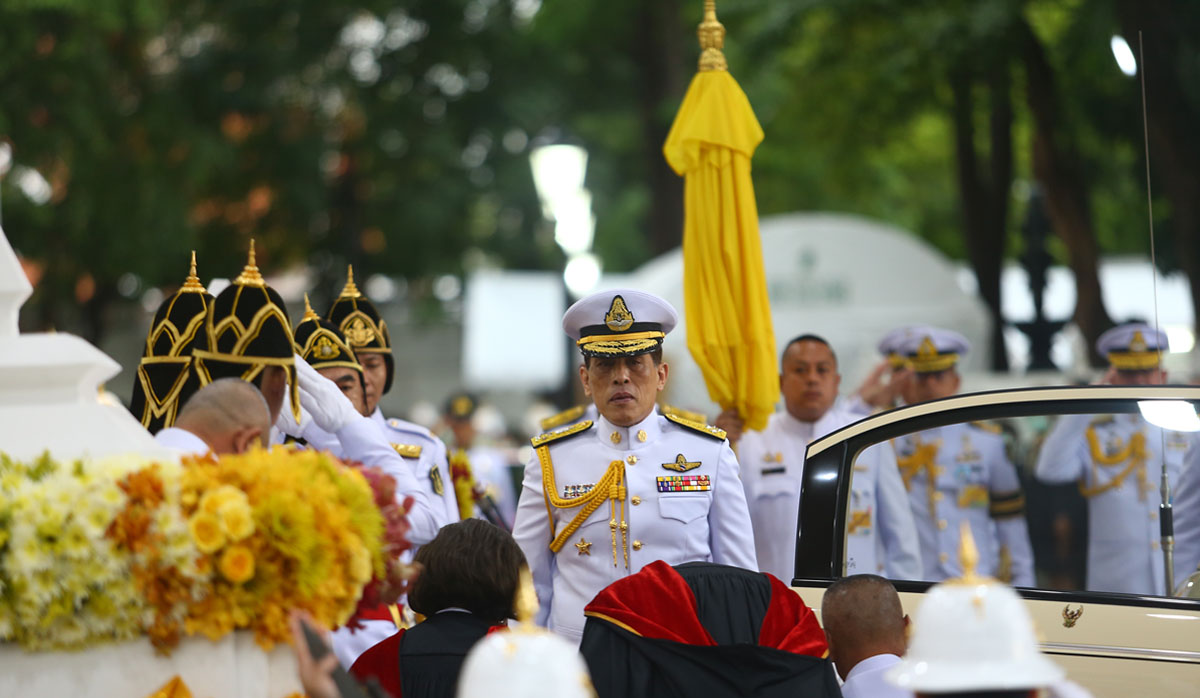 October 2020. King Vajiralongkorn attended a graduation ceremony at the Thammasat University, the same school where students were massacred in 1976 after authorities mistook a reenactment of a lynching for a dramatization of the hanging of the crown prince.

Just recently, the lawyer of a French expat who has lived in Thailand for nearly two decades advised him to leave without appealing a deportation order because, the lawyer said, he could be charged with lèse majesté if he remained on Thai soil. The expat, Yan Marchal, had made a name for himself on TikTok and Facebook with parodies of the government and the monarchy — but mostly of the former. Upon arriving in Phuket from France in late November, Marchal was handed a deportation order that declared him a persona non grata and a possible “danger to the public” because of his “behavior.” He had planned to appeal the order, but then he heard the immigration officers talking about him and the lèse majesté law.

In a later text message to Asia Democracy Chronicles: “I will take the flight this evening in order to avoid legal risks.” Yet up to now, there has been no formal charge against Marchal.

Playing it safe, however, has become the norm in Thailand when it comes to the lèse majesté law. Then again, perhaps “playing it too safe” would be a more accurate description of what is happening now. Foremost among the overly cautious are members of the country’s mainstream media. Fearful of possible repercussions, Thai media outlets self-censor so much that they have, by their own selves, practically imposed a news blackout on many issues regarding the monarchy.

Take, for example, the Thai king’s visits and long stays in Germany, which have been widely reported by the German and other Western press. Even his lifestyle, including how he likes to dress on his trips to the malls there, has been chronicled by non-Thai media outlets. But if you relied only on the Thai mainstream media, it would seem as if the king has never left Thailand. 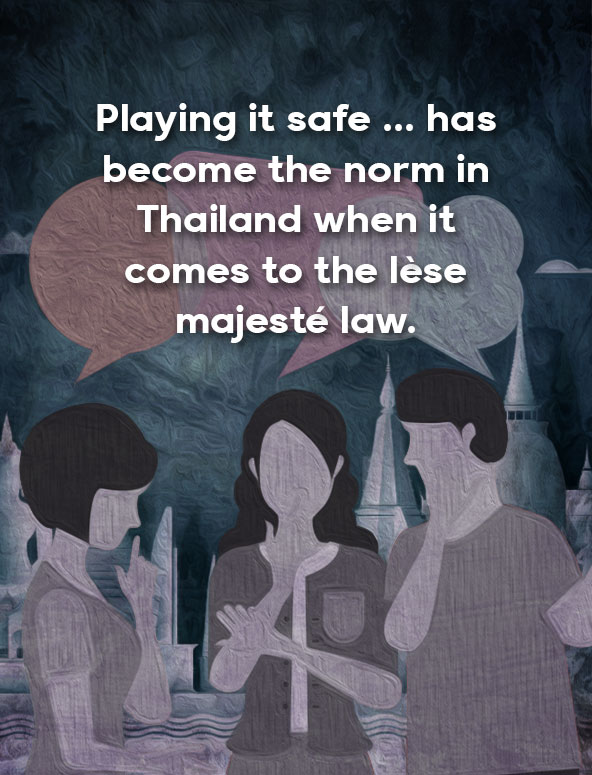 Thai media self-censorship can also be seen in the apparent decision of the country’s news outfits to ignore the growing trend among Thai moviegoers to remain seated while the royal anthem is played in movie houses. Normally, people would stand up once the anthem starts playing before a film is shown; this is to show respect to the king. In the past year or so, however, many young Thai moviegoers have been refusing to stand up whenever the royal anthem is played. Yet although the foreign press had begun reporting on this, the Thai mainstream media remained mum about what was a significant indication of people’s changing attitudes toward the monarchy.

The Thai press’s silence on the issue, however, was inadvertently broken by no less than Prime Minister Gen. Prayut Chan-o-cha in November. In a speech at the National Defense College, Prayut told the students to have “courage” to stand in honor of the royal anthem, even though fewer and fewer people are doing so. Thai media outlets, in covering the prime minister’s speech, obviously had to report on what he said.

It is telling as well that a proper poll has yet to be conducted on the possible changing perceptions among the public toward the monarchy. Clearly, this is another form of self-censorship beyond the scope of the lèse majesté law. No one dares to conduct such surveys because any negative results could have negative repercussions on the pollsters themselves.

Gagged — and tied up

Yet as if all this self-gagging hasn’t been enough, the National Broadcasting and Telecommunication Commission (NBTC) recently made “recommendations” to the Thai broadcast media on how they should report on the monarchy-reform movement that has been gaining momentum, especially among the youth. The move came on the heels of a ruling by the Constitutional Court that the movement’s three key leaders had acted unconstitutionally by seeking to overthrow the monarchy.

NBTC “invited” representatives of all broadcast media and gave them guidelines, or what it described as a “request for cooperation.” Among these guidelines are for the broadcast media to avoid the following: mentioning the details of the 10-point demand put together by the protesters last year to reform the monarchy; interviewing monarchy-reform protest leaders and protesters; and undertaking lengthy live coverage of monarchy-reform protests because they could feature political incitement messages. Talk shows are also expected to refrain from inviting supporters and opponents of the 10-point demand for a debate.

You don’t need a crystal ball to predict what the Thai broadcast media will do next in reaction to the NBTC “request.”

To be fair, the Thai media’s fears are not entirely baseless. In 2016, Thai authorities even investigated the BBC’s local service for a profile on the then newly ascended King Rama X that the respected broadcaster had uploaded. Just last January, a 65-year-old former civil servant was sentenced to 87 years in prison on 29 counts of lèse majesté for posting on Facebook and YouTube audio clips of a radio host criticizing the monarchy; the sentence was later reduced to 43 years and six months because she had pleaded guilty. The Thai Lawyers for Human Rights says that between Nov. 24, 2020 and June 11, 2021 alone, 100 individuals, among them eight minors, had been charged for violating the lèse majesté law. (As of Dec. 13, that figure had climbed to more than 150.) 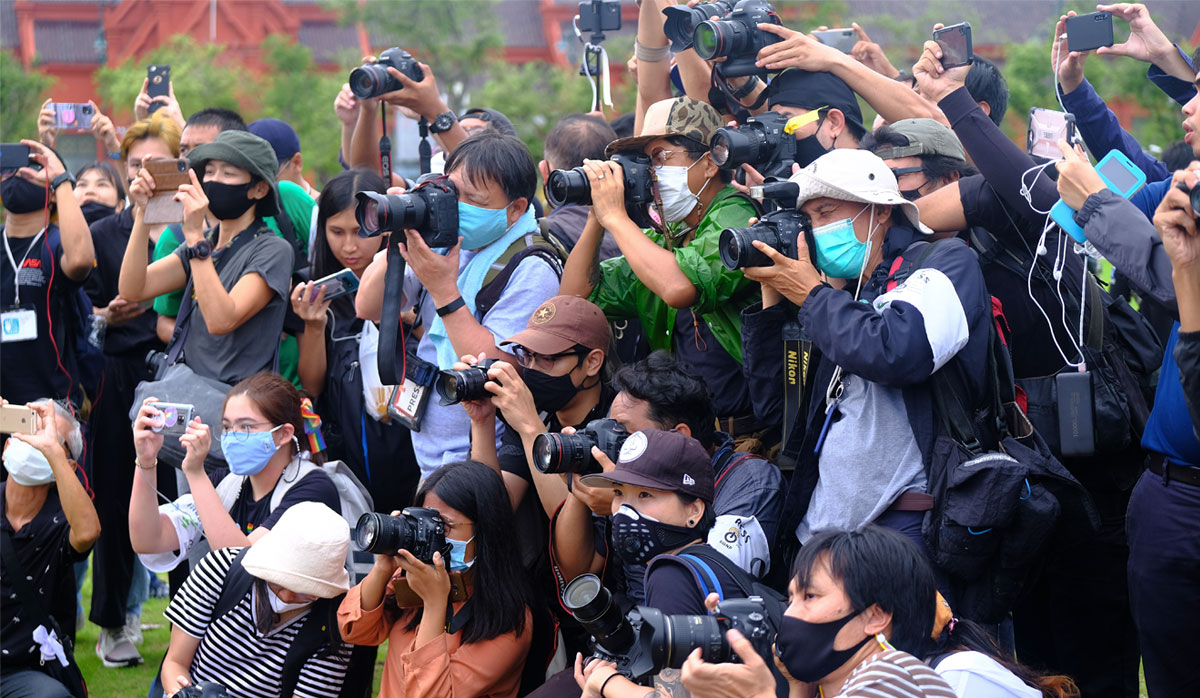 Thai mainstream media is no longer the main source of news for a number of Thais, who now have to rely on foreign press reports and social media posts for a different perspective on current events.

Yet the lèse majesté-plus effect among the Thai mainstream media is especially worrisome. It marks the failure of the local press to cover and encourage discussion on an institution that is part and parcel of Thai culture and history. What is supposed to be society’s watchdog has even failed to act when authorities are already blurring the lines; the law is supposed to protect the monarchy, but it has been used more and more to quell political dissent.

These twin failures have driven an increasing number of Thais to seek news and information elsewhere, including on social media and the foreign press. As a result, Thais have found themselves straddling parallel worlds. In one world, everything is all good about the monarchy, according to the Thai press. In the other, the monarchy is criticized and attacked, as is done with institutions in democracies elsewhere, but with Thai social-media posters pointedly choosing to remain anonymous. Fear prevails in one world, and relative freedom can be found in the other.

There is another advantage in platforms where freedom of expression and freedom of speech still manage to exist: Not everything may be all right and picture-perfect there, but the pressure cooker is not in danger of blowing up. ●