Through policy change, the country’s oligarchic government is dismantling key mechanisms within the nation’s anti-corruption body to make way for more impunity.

One morning in early May, between the morning rush hour and lunch break, a deluge of obituaries poured over social media across Indonesia. People and civil organizations were expressing their condolences over the “demise” of Indonesia’s anti-corruption agency (KPK) after a string of events that seemed fatal to the national anti-graft body.

KPK is now deemed to exist in name only. But its sad fate has been no surprise. On 4 May, Indonesia’s Constitutional Court annulled the request submitted by three former KPK commissioners to formally review the 2019 revision of the KPK law. Perceived to put a leash on investigations, the revised bill stipulates that any act of wiretapping, searches, and confiscations will need the approval of a newly established “Supervisory Board” that would monitor KPK’s internal activities. Corruption cases unable to be concluded in two years must also be dropped.

Another provision involves changing the status of KPK officers from independent contractors to civil servants, which would require them to undergo examinations to retain their employment. Among other things, the move means the investigators’ full integration with the government. Within this structure, they would be investigating powerful figures. 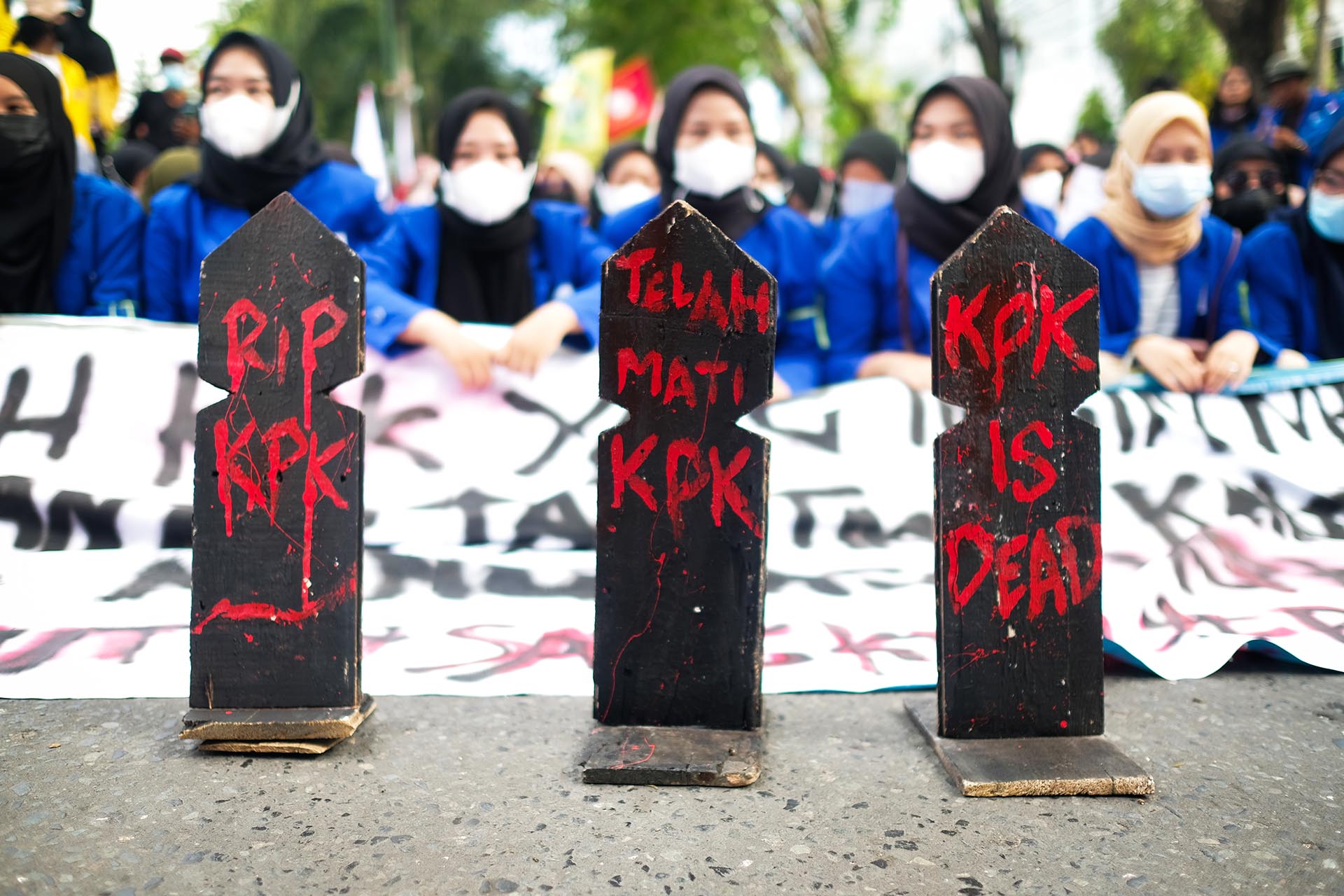 24 Jun 2021. Indonesians take to the streets to protest a controversial government policy on the anti-corruption body KPK, now deemed to exist in name only.

In the end, 75 KPK employees failed a controversial civic knowledge test, with 51 of them losing their jobs despite President Joko Widodo’s proposal of providing mandatory civic courses instead of resorting to permanent termination. Employees have since disclosed that the test questions had very little to do with their job, and aimed to gauge political views instead, such as their stance on LGBT rights, the Chinese minority, and whether or not they believe rumors of a clandestine “Taliban faction” in KPK, targeting politicians in opposition to the conservative Islam agenda.

Reports by the investigative journalism consortium Indonesialeaks suggest the test was a ruse to oust investigators working on high-profile cases, along with other critical voices within KPK. Indeed, among those who lost their jobs after failing the test were revered senior investigator Novel Baswedan, who in 2017 fell victim to an acid attack, and investigators dealing with former Social Affairs Minister Juliari Batubara’s IDR20 billion (US$1.39 million) embezzlement of COVID-19 aid packages.

Since its establishment in 2004, KPK has been the epicenter of major political tempests that implicated its leaders in criminal cases, ranging from charges of orchestrating murder to false allegations of power abuse and extortion. Many see the controversies as coordinated attempts to dismantle the organization’s chain of command by accusing its high-ranking officials of criminal acts, thereby sending ripples of intimidation down to the subordinates.

Yet these alleged plots failed to completely debilitate the investigators. In a recent documentary The Endgame, ousted KPK employees explained that the organization’s robust internal mechanism, aided by the stalwartness of its personnel (famously “incorruptible” to the point of refusing even offers of mineral water during the job), had enabled it to maintain its integrity despite tremendous external pressure.

But what could work and jeopardize anti-corruption efforts in Indonesia, they said, is to attack KPK from within: depose important investigators, appoint new commissioners with questionable track records, and absorb the remaining staff to a system that leaves them compromised.

That has now happened, and there are doubts that KPK can recover from this latest assault. As it is, KPK has recorded only two successful sting operations during the first 10 months under the much-criticized new leadership of Police General Firli Bahuri. By comparison, the previous administration managed to conduct eight crackdowns within its first six months alone.

Meanwhile, public trust toward KPK appears to be in freefall. In a 2020 survey conducted by Paramadina University, up to 74 percent of elite stakeholders expressed dissatisfaction with Firli’s administration; another 23 percent said they were “not that satisfied.” Interestingly, 95 percent of the respondents considered the KPK law revision “unfavourable,” arguing that it would directly affect the number of cases the organization can handle, and fosters a reluctance to “touch upon” huge corruption cases within the innermost power circle. The remaining five percent saw the policy change as having no meaningful impact. None responded to it positively.

The prized child of democracy

For sure, this isn’t the first time KPK has been pronounced dead, or at least comatose. During every major controversy throughout its history, civil-society coalitions had been quick to announce its imminent demise, leading to massive public campaigns condemning the latest attempt at institutional castration. In fact, the 2019 KPK law revision was so universally derided that it catalyzed the largest nationwide protest movement in over two decades, since the 1998 Reformasi (Reform) uprising that led to President Soeharto stepping down from office.

Comparing the two, however, could leave one depressed. The Reformasi activists of 1998 got what they wanted: Soeharto resigned, paving the way for a new era of political order in Indonesia. But the 2019 protesters have yet to achieve their intended goal to roll back just one piece of legislation even after five students ended up dead.

Yet the parallel between these two events goes deeper. One leitmotif of Reformasi was the devastating state of corruption during Soeharto’s 32-year rule that severely damaged Indonesia’s economy. Political scientist Jeffrey Winters described Soeharto’s tenure as that of a “     Sultanistic     Oligarchy”: Soeharto was cunning enough to let his underlings have a slice of the pie, but his family enjoyed the rest of it. It was an effective way to maintain political stability, but it meant corruption was omnipresent within Indonesia’s New Order government and was eventually normalized as part of everyday politics. 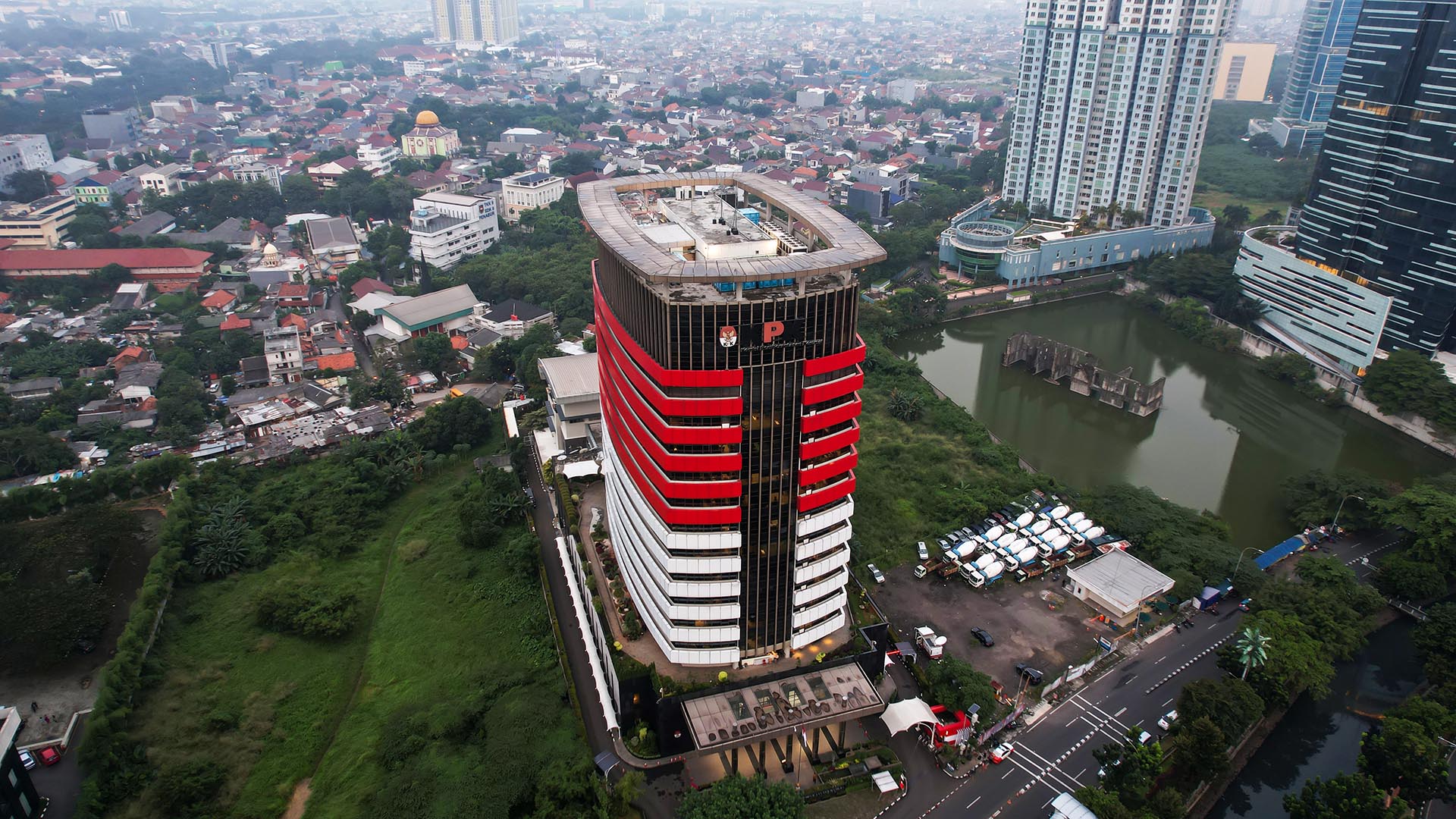 Since its establishment in 2004, KPK has been the epicenter of major political tempests that have implicated its leaders in criminal cases.

Many wanted such to be absent in post-1998 Indonesia. In particular, there was an urgent need within the recently established democratic order to keep tabs on business conglomerates moonlighting as politicians—many of them leftovers of Soeharto’s empire—through a state-mandated mechanism of transparency.

This is why KPK has always been viewed as the prized child of Indonesia’s political reform. It is not merely an institution upholding democratic ideals among others, but the most important one. Its troubling state of affairs signals the alarming state of an entire nation, igniting movements to rally and defend it.

But the problem with arresting corrupt oligarchs – a necessary KPK task – is that it simply amounts to a moral victory rather than a strategic one; KPK might be able to save over IDR60 trillion (US$4.1 billion) of state funds annually, but the money remains trapped in the same predatory system. Similarly, sting operations could bring corrupt individuals to justice, yet more of the same kind would just take their place. 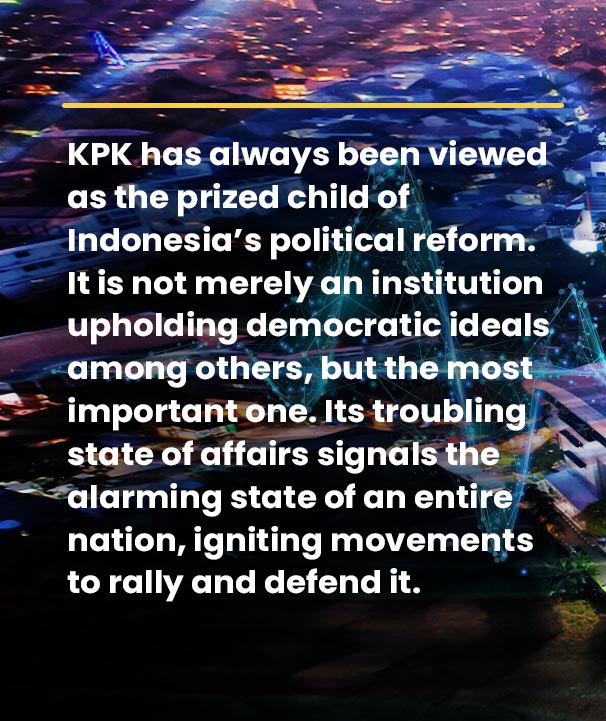 As historian Benjamin Fogel argued, the caveat of “anti-corruption politics,” which treat the problem as the epitome of all social ills, is that these eventually produce diminishing expectations. Living under a corrupt regime tends to breed cynicism. If everyone else is conducting illicit exchanges to gain upward social mobility, why should one care for anything else but one’s family and personal wellbeing? This apolitical view is the default subjectivity: conditioning people to believe their actions are atomized and to scoff at the idea that collective action can substantially reorient their social terrain.

Populist alliances provide a temporary break from this line of thinking. But the moral undertones of these movements carry the latent danger of short-sightedness. There is even no guarantee that anti-corruption politics are inherently progressive: authoritarian politicians such as Rodrigo Duterte or Jair Bolsonaro present themselves as champions of ordinary people, promising to uproot corruptors and “lock them all up.”

It might even be said that corrupt regimes tend to generate their own set of populist opposition. In Europe, the rise of populism has been attributed to a “lack of intermediation” between politicians and their constituents, marked by declining rates of party members and homogenization of the public due to the erosion of class, religion, and status categories. To an extent, one might apply the same condition—and not its contextually specific causes—to Indonesia’s oligarchic regime, characterized by blurred ideological lines between parties and widespread money politics.

This suggests no avenues are left to achieve substantial social change within the system, as parties and technocrats are increasingly subject to the same predatory logic of self-interest.  Thus populist movements, when they do arise, present themselves as quick remedies without having to resort to ideological commitments or the grunt work of advocating a radical system overhaul. Such formations usually happen in an electoral context, by espousing outsiders untainted by the system to single-handedly deliver change—think Joko Widodo’s ascendancy to the Presidency in 2014. Unsurprisingly, that hasn’t turned out very well.

But a similar populist logic is also unconsciously present within Indonesia’s anti-corruption alliance: even if the KPK law revision and firing of important personnel can be undone, the oligarchy remains deeply entrenched. The movement seems to be in a state of shock by the increasingly apparent impunity given to corruptors, all while knowing very well through previous controversies that dismantling KPK is high on the oligarchs’ priority list.

The protests of 2019, made possible by collective reactionary anger, eventually dissolved in thin air. Without a clear framework on how to tackle the persistent oligarch problem, anti-corruption politics might create cycles that end up in learned defeatism.

Paradoxically, Indonesia’s fight against corruption might need to grow from a simple preoccupation with corruption itself. This does not mean ignoring corruption or advocating for it, but focusing on building a political system that could largely prevent oligarchs and their networks from forming in the first place. Arguably, it might also be the only way to ensure an institution such as KPK does not fall through (painfully) simple policy changes.

Even KPK commissioners have said in the past that Indonesia is a kleptocracy rather than a democratic system. They, more than others, understand that to get their work done, big changes need to happen. After the latest onslaught on KPK, these changes have to start happening. Fast. ●

After the US withdrawal, the Taliban cometh?

No end in sight for survivors of domestic abuse

No end in sight for survivors of domestic abuse