hen Tokyo officially started accepting applications for registration in its new same-sex union system last October, many non-binary couples jumped at the chance of finally having legal recognition of their partnerships.

Fumino Sugiyama, who identifies as transgender, and his wife were among the 120 couples who had already applied online by Nov. 1, 2022, when the Tokyo legislation that gives official recognition to same-sex partnerships took effect. Sugiyama said, “We are elated. The new ordinance is a landmark in our struggle to be officially accepted in Japanese society.”

The Tokyo metropolitan government adopted the law last June. According to its official website, the Tokyo Partnership Oath System was introduced in order to “create an environment where sexual minorities can live comfortably” and so that “everyone can play an active role in their own way.”

Tokyo Governor Yuriko Koike also said at a press conference, “We believe this will lead to more diversity in Tokyo.”

The system stops short of legalizing same-sex marriage, though. In fact, a Tokyo partnership oath is not legally binding. And while it gives rights to services in Tokyo for same-sex couples, these do not include those regarding inheritance, child custody, and social services related to marital status.

Still, the move reflects a major breakthrough in Japanese society and represents a growing acceptance of gender as a spectrum. Rights advocates also say that even though Tokyo is somewhat late in the game — it is the ninth prefecture to adopt such legislation — its decision is nevertheless significant since it is the country’s capital. 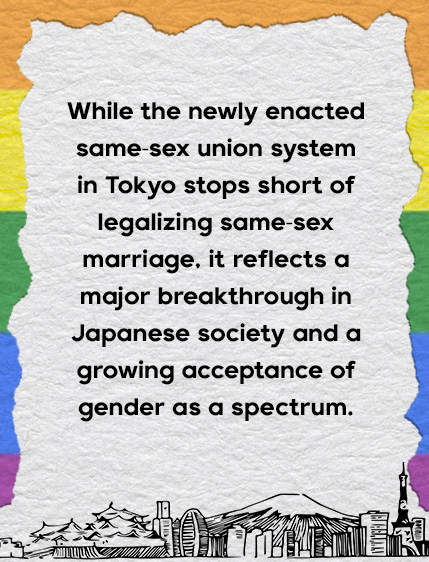 Yet while activists hail Tokyo’s newly enacted law, they note that equal rights are still a long way off in Japan. They say one major obstacle is the entrenched conservative bloc within Japan’s influential Liberal Democratic Party (LDP), which has led the government for most of the postwar era.

Indeed, while LGBTQs (lesbians, gays, bisexuals, transgenders, and queers) have not been banned by law, LDP politicians as late as 2015 were still arguing against same-sex marriage by saying that it may foster unintended discrimination because of insufficient understanding among the Japanese. And just this year, Prime Minister Fumio Kishida himself said during the LDP leadership contest that introducing same-sex marriage would require “prudent consideration.”

And yet gender identities of transgender people have been recognized in Japan since 2004, after reassignment surgery and sterilization. There are indications as well that public attitudes regarding gender have been changing.

In a September 2019 poll conducted by the Lifenet Insurance Company among some 10,000 LGBTQs, an overwhelming 70% of the respondents felt that sexual orientation and gender identity are better respected compared to five years prior. In addition, 60% of the respondents who belonged to the younger generation said that they support same-sex marriage.

That represents a sea change in people’s attitudes. Sugiyama, 41, still remembers how difficult it was for him while he was growing up. He said that for years, the pressure to conform was a nagging pain, with his identity hidden so tightly that it was as if he was inside a tunnel with no exit. In the all-girls school he attended, it manifested itself as a constant irritation over being forced to wear a skirt. And home brought no relief; his mother’s expectations to be like the girls were too heavy to bear.

That feeling of hopelessness only worsened as an adult. “My co-workers made nasty jokes about people who were transgender, gay, or lesbian,” recalled Sugiyama. “There were times when my charade to comply with social norms even caused me to contemplate suicide as an escape path.”

But somehow he made it through. He underwent breast-removal surgery when he was 27 and had hormone therapy. Today he and his wife are raising two children.

“I realized that global society is founded on a conservative gender divide,” he told Asia Democracy Chronicles. “I returned to Japan determined to speak out and change my life to live the way I want.”

Gon Matsunaka, founder and president of the Pride House Tokyo Consortium, an umbrella organization of sexual minorities working together for wider visibility, also talked about how living in Australia during his twenties had been eye-opening. He said that he felt free during his two years there because he had no fear of being ostracized.

“Returning to Japan`s conformist society was a culture shock and forced me to fight for the marginalized,” said Matsunaka, now 46.

He was also among the first gay Japanese to come out in public. Explained Matsunaka: “News at that time of suicides by male university students who were gay depressed me and forced me to take a stand.”

Matsunaka linked the rising acceptance of LGBTQs and their lifestyles today to the 2020 Tokyo Olympic Games (which were held a year late), which pushed the theme of inclusiveness. He remarked, “The slogan raised public awareness and also forced the conservative authorities to usher in some important changes to support diversity in Japan.”

To Matsunaka, the lack of visible representation in the Diet is one of the strongest reasons why Japan has yet to eliminate gender prejudice in its laws and politics. Currently, there is only one openly gay elected lawmaker — Taiga Ishikawa from the opposition Constitutional Democratic Party of Japan — in the Diet’s Upper House. One of Japan`s first openly lesbian politicians, Kanako Otsuji, lost her seat in the House of Representatives in the 2021 elections.

Gender studies Professor Takashi Kazama of Chukyo University in Nagoya said that the ongoing national debate about accepting Japan’s LGBTQ community must be viewed through the specifics of the country’s social lens.

“There is a tradition of tolerance within pre-set borders in Japanese society,” he told ADC. “The goal, therefore, is to accept sexual minorities as long as the practice is private.”

Kazama‘s research compares this attitude to that in the West, where the LGBTQ protest movement is directed at harassment by authorities and is also a part of a moral debate linked to challenging religious and discriminative beliefs. “In contrast,” he said, “inclusiveness in Japan is based on social tolerance as the ideal to strive for.”

Kazama explained further that the argument to support tolerance maintains social hierarchy. For example, the LDP promoted the understanding of diverse sexuality against the enactment of a 2016 bill proposed by the Democratic Party that was aimed at eradicating discrimination against people on the basis of sexual orientation. Said Kazama: “In practice, the LDP sends the message to the majority that ‘your privileges will not be threatened by sexual minorities.’”

Matsunaka meanwhile said that the way forward is putting pressure on Japan, a leading world power, to be viewed as an international center. A liberal reputation could be critical in attracting foreign companies and people, he said. Added Matsunaka: “Our next goal is to enable marriage and extend the Tokyo example to rural areas that are slow to progress.” ●

Are Malaysians prepared to take next step and unite on a Common Agenda for the next five years? — Lim Kit Siang