The Asian giant’s attempts to enhance its international image through soft power have mixed results.

hina may have taken a backseat during the 40th and 41st Association of Southeast Asian Nations (ASEAN) Summits and Related Summits in Phnom Penh in November with the protracted crisis in Myanmar taking center stage in the discussions, but the country remained on the regional bloc’s agenda due to its continued aggressive stance in the South China Sea.

Similarly, in recent higher-profile forums such as the G20 in Bali and the Asia-Pacific Economic Cooperation summit in Bangkok, China was on the list of topics among the participants because of its tensions with the United States over issues of human rights at home, as well as regarding Taiwan, whose claims at sovereignty China rejects.

China knows too well that it has long had a not-so-pleasant image in the international arena, which was worsened all the more by the demonization it suffered through then-U.S. President Donald Trump’s incessant pointing out that the COVID-19 pandemic began there.

But China has been crafting soft power approaches for years now to gain geopolitical leadership and influence, especially in Asia. At the height of the pandemic, it even ventured into health diplomacy.

Indications are its “vaccine diplomacy” has helped it earn needed brownie points from many governments. Some of its persuasion tactics, however, have not been as successful — and despite the growing dependence of several countries on monies from Beijing.

“Economic resources, cultural assets, and technological innovations are the main sources of China’s soft power,” said the State of Southeast Asia 2022 Survey Report released by the Singapore-based ASEAN Studies Centre. “Southeast Asian countries have high economic stakes in their relationship with China, which explains why they have stood firmly with China in combating the pandemic.”

According to the survey, Southeast Asians who benefited most from China’s vaccines view China as having given the strongest COVID-19 vaccine support, with respondents saying it gave 57.8% vaccine support while the United States gave 23.2%.

Meanwhile, in its “Beijing’s Global Media Influence 2022” report, the U.S. think tank Freedom House said that China’s strategies are becoming “more sophisticated, more aggressive and harder to detect.” But, it added, a growing number of countries have demonstrated considerable resistance to these in recent years, with a segment of the public in these nations remaining wary of Chinese state narratives. 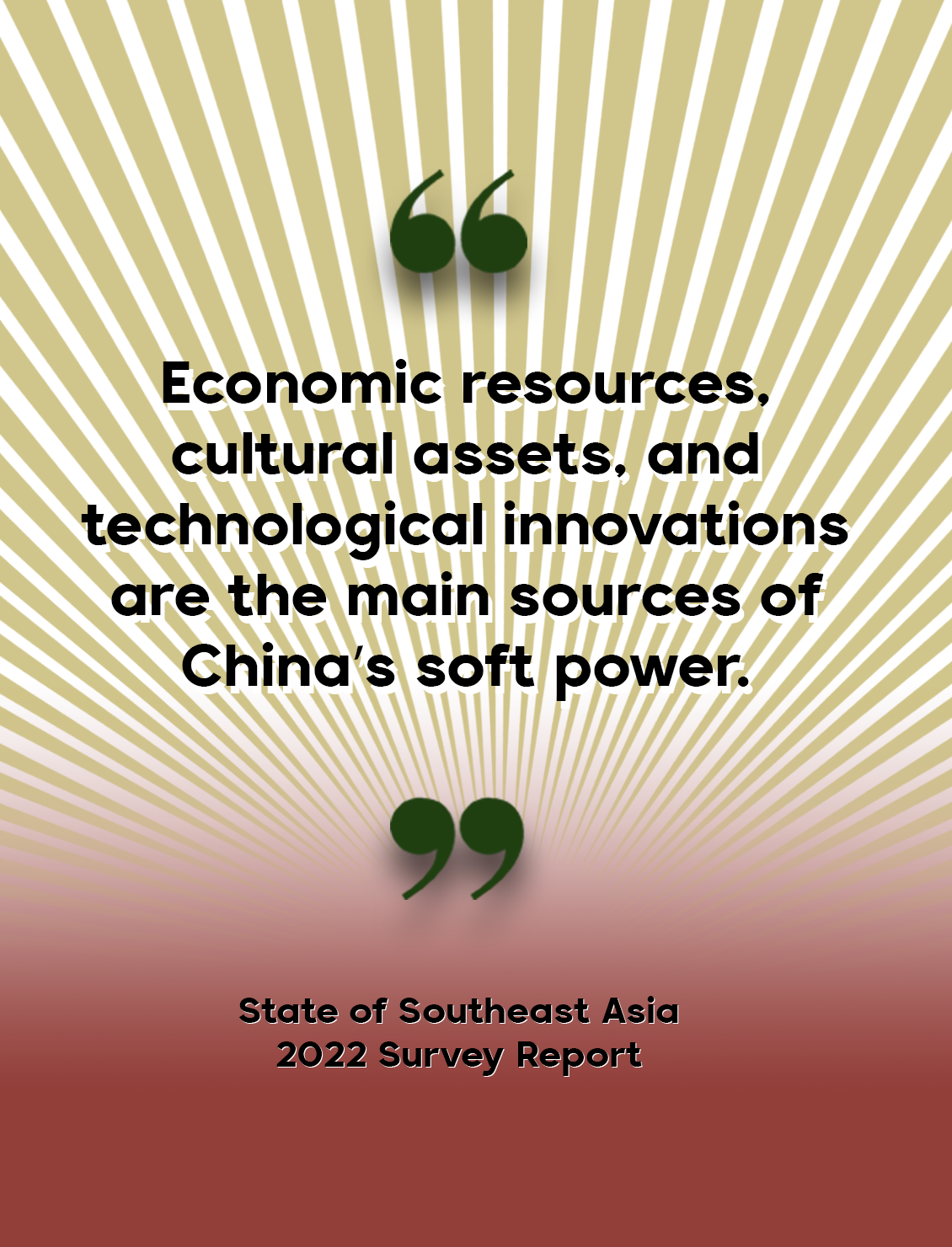 These include those in Southeast Asia, such as Malaysia, Indonesia, and the Philippines, which the report said were among the 16 territories where China’s media influence efforts were of either high or very high intensity.

The report examined 30 territories in terms of the intensity of such efforts by China from early 2019 until the end of 2021.

Malaysia, Indonesia, and the Philippines, along with Brunei, Vietnam, and Taiwan, have overlapping assertions over the South China Sea that China claims.

The report also said that Chinese state media frequently cite China vaccine donations to the Philippines while attacking U.S. policies. According to Beijing’s narrative, it said, Washington is politicizing investigations into COVID-19’s origins, while the Chinese Communist Party (CCP) wants a “win-win cooperation” between China and the sea dispute, emphasizing that the countries’ common interests are far greater than their differences.

But Freedom House noted a “widespread pushback” against China’s actions in the Philippines, where politicians have expressed concerns about Beijing’s media influence and Filipinos remained “highly skeptical” toward China and the CCP. It cited how a music video released by the Chinese Embassy in Manila promoting Chinese medical assistance and bilateral friendship amid the pandemic drew criticism from Filipinos on social media, who saw it as blatant propaganda.

For Malaysia, the report said that Chinese state narratives use “the standard propaganda package” that mixes rapport building, positive promotion of China,  and the CCP’s governance model and “counter-narratives to international criticism,” particularly from the United States.

“Chinese officials emphasized the continued ‘friendship’ between Malaysia and China and stressed that initiatives like the BRI (Belt and Road Initiative) benefited both countries,” the Freedom House report said.  China’s territorial interests are couched in a rhetoric of “maintaining peace and stability,” it added,  “implying that other foreign powers are seeking to dominate this space, (while) Beijing is ensuring regional order and security.”

The report also said that in Malaysia, where almost a quarter of the population is ethnic Chinese, the public was “wary of all forms of state-controlled news” and displayed “widespread skepticism to Chinese state narratives.”

While many Malaysians attribute their country’s COVID-19 recovery partly to assistance from China, it said that “a majority worry about China’s influence, particularly regarding its growing footprint in the South China Sea.” It added that Malaysians have consistently shown “increased wariness and skepticism of Chinese government motives in the region and internationally.”

For Indonesia, China’s media influence efforts expanded between 2019 and 2021, said the report, with Beijing successfully pushing for new agreements with the country’s national news agency, a major free-to-air television network, and new diplomatic social media accounts, and appealing to Indonesia’s Muslim community through trips to Xinjiang that presented a government-controlled perspective of the region.

But the report maintained that trust in China remains low in Indonesia, continuing a trend that began in 2015. It said that the number of Indonesians who regard China as a “revisionist power” increased by 15% from 2020 to 2021, or at the height of the pandemic.

Last August, Michelle Bachelet of the Office of the UN High Commissioner for Human Rights issued a report on her last day as commissioner that called attention to China’s “serious human rights violations” against Uyghur Muslims in Xinjiang province.

The U.N. report stated that the “extent of arbitrary and discriminatory detention of members of Uyghur and other predominantly Muslim groups, pursuant to law and policy, in the context of restrictions and deprivation more generally of fundamental rights enjoyed individually and collectively, may constitute international crimes, in particular crimes against humanity.”

China, though, began wielding its soft power long before it started a policy of repression against the Uyghur Muslims. According to ASEAN Studies Centre’s Lin, scholars have placed the start of China’s soft power in the 2000s, particularly after the 17th National Congress in 2007 when then-President Hu Jintao highlighted the importance of enhancing the influence of Chinese culture worldwide.

China then stepped up people-to-people exchanges with its partners and has since increased its granting of scholarships, such as the ASEAN-China Young Leaders Scholarship launched in 2018.

“I personally know many African and some Southeast Asian nationals who have received formal and higher education in China, who would not have received the same if they were in their own countries, maybe because of lack of funds,” said Jan Robert Go, a professor at the University of the Philippines.

He also said, “This, to my mind, affects how these individuals, their families, and even their friends would view China: one that provides opportunities for the less fortunate or those economically challenged.”

But Lin said that China’s “economic soft power” has had more impact, citing the BRI that countries in Africa and Southeast Asia welcomed. She conceded, though, “While most (of these) development initiatives will have indicators to show its positive economic or social development impact, some critics have argued that they do not conform to international development assistance standards.”

Lin observed that especially in the past two years, China has been enhancing economic and socio-cultural cooperation through official development assistance and a mix of other loans to mostly developing country beneficiaries.

“These include projects under the BRI, which has both benefits and challenges, particularly resulting in some of the ‘poorer’ countries to be sucked into a debt trap such as the situation in Laos today,” she said. “Should these countries fail to repay these large infrastructure debts,” she continued, “they may end up in the situation of Sri Lanka.”

Lin said that benefits for China from such initiatives have included the government of then-Philippine President Rodrigo Duterte “reducing its pressure on China in the South China Sea despite China’s violation of international law.”

Go, for his part, said that countries with loans and pending projects with China can always assert their independence and not be cowed into continuing dependence. He pointed out, “I think the more important question is, would they choose to go against China from whose coffers they primarily benefit? It is a dilemma, which is not actually a dilemma.”

“Real politics would dictate that they keep on leaning,” said Go, who teaches political theory. “The problem is that their overdependence would not be to their advantage in the long run. Whether it is China or any other powerful state in the world, the chains of debt are pretty hard to get rid of.” ●

Diana G. Mendoza is a journalist based in Manila.