Human traffickers prey on women from Nepal’s Dalit and indigenous communities who are desperate for opportunities denied them in their country.

he man was new to the village in Lamjung, a remote district in the mid-hill of Nepal, but he soon became a frequent visitor to the tea shop run by Asmita (not her real name). She learned that his name was Daulat Rokka; they would often converse while he sipped his tea. Then, one day, Rokka told Asmita about a job opportunity in Kuwait and began regaling her with colorful accounts of life abroad, earning in dollars, and beautiful places that she, too, could explore — if she followed what he said.

Asmita, born into one of Nepal’s lowest castes — the Dalit — and with her family burdened with debt, started considering Rokka’s offer. At the time, it looked like a once-in-a-lifetime opportunity.

“I was not earning enough from my tea shop,” she recalls. “Besides, getting a proper job in Nepal for a Dalit woman like me is next to impossible.”

Still, Asmita says, “If I didn’t have to pay the loan amount and its interest, I would never have considered going abroad. But since the amount earned from the small tea shop was barely enough to cover my family’s expenses, I decided to do what he said.”

And so the 26-year-old Asmita went with Rokka, who brought her first to Kathmandu, some 186 km driving distance east of Lamjung. From there they had another road trip, crossing the Nepal-India border to go to Delhi, where Asmita would catch a flight to Kuwait days later.

Asmita was completely unaware that she had become a victim of human traffickers who, in Nepal, target mostly women and girls from indigenous groups and lower castes, and lure them with promises of foreign employment and a decent income. The most recent data based on caste and ethnicity from the National Human Rights Commission (NHRC) show that as of 2019, at least 49 percent of trafficked women survivors were of indigenous nationalities or Adivasi Janajati, while 15 percent were Dalits like Asmita.

“I didn’t even know what trafficking actually was,” says Asmita. “I was told that my job was at a hotel, but I was taken to a house as a domestic helper.”

She says that in Kuwait she ended up being abused both physically and sexually by her employer. Recounts Asmita: “He told me that he purchased me from some agent by paying thousands of dollars and now he could do anything to me. I was frightened since I was not allowed to communicate with my family members back in Nepal.”

For Kamal Babu Pariyar, executive director of the Association for Dalit Women’s Advancement of Nepal, a rights organization supporting the poor, Dalit, and other marginalized women and children, stories like that of Asmita are all too familiar. He also says that although trafficking of women from minority groups was prevalent in Nepal even before the COVID-19 pandemic, the economic crisis that followed made the situation even scarier. 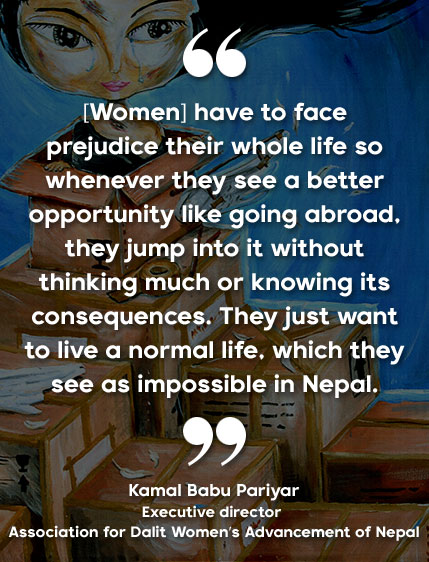 Women, who were already vulnerable before, are now even more desperate for opportunities, increasing their risks of being trafficked, explains Pariyar. Referring to Dalit women, in particular, he adds, “They have to face prejudice their whole life so whenever they see a better opportunity like going abroad, they jump into it without thinking much or knowing its consequences. They just want to live a normal life, which they see as impossible in Nepal.”

Junita Rai, general secretary of the National Indigenous Women’s Federation, agrees with Pariyar. She notes as well, “Due to their face structure and skin color, indigenous women are at very high risk of getting trafficked for sexual purposes.”

“Most of the women are lured with the pretext of better jobs and income,” Rai continues. “However, the majority of them usually end up in brothels of India since the demand for Mongolian-faced women is high in many countries.”

There are 59 indigenous nationalities legally recognized by Nepal’s government, including the Tamang, Rai, Gurung, and Limbu, who are lighter-skinned compared with much of the rest of the country’s population. According to the 2011 census, which the government has yet to update, the Adivasi Janajati make up 36 percent of Nepal’s 26.5 million people. Researchers say, though, that the real figure is about 50 percent. The Dalits meanwhile constitute 13.6 percent of the total population, or 3.6 million people. However, rights organizations say their current number is closer to five million.

Given Nepal’s caste-based societal order, the Dalit and Adivasi Janajati communities are particularly disadvantaged and often lack access to education and job opportunities, among other things. But Nepali society is patriarchal as well, which means women from these communities suffer discrimination twice over.

Speaking in general, Manju Gurung, co-founder of the migrant rights organization Pourakhi, says that many of the female trafficking survivors who seek help from their group even have no idea in which country they have wound up.

“Most of them are illiterate with no proper skills,” says Gurung. “This is the reason why they face trauma and abuse. And since they don’t have any financial support to return (to Nepal), many times different NGOs (nongovernment organizations) and INGOs (international NGOs) gather resources to rescue victims.”

Local media have quoted the NHRC and its officials as saying that nearly 1.5 million Nepalis are at risk of various forms of human trafficking. According to media reports, NHRC estimated that between 2018 and 2019 alone, nearly 35,000 Nepali citizens — 15,000 men, 15,000 women, and 5,000 children — were trafficked.

“Agents are paid from US$7,000 to US$11,000 to ‘manage’ Nepali women,” remarks Superintendent Dan Bahadur Malla of the Anti-Human Trafficking Bureau of the Nepal Police. “It has become a lucrative business now, which has increased further risk.”

For sure, the police data reflect only those trafficked women who sought help or filed cases with authorities. Rights advocates say that many others never ask for help or file complaints after they manage to get away from their traffickers.

Gurung says that after they are rescued, the majority of victims do not file a case with the police because they have little hope that they could get justice by doing so. “Even if someone wishes to,” she adds, “the process is so complicated and lengthy that they give up after some time.”

In fact, Nepal’s existing laws lack clarity on how to address the issue of human trafficking under the veil of foreign-employment opportunities. While the Foreign Employment Act is silent on human trafficking, the Human Trafficking and Transportation (Control) Act does not recognize human trafficking that purportedly is for legitimate foreign employment. This creates confusion as to which law is relevant and what action needs to be taken in these cases — inadvertently allowing the perpetrators to operate more easily.

Gurung also says that those who know that they went abroad illegally “fear they could face consequences, too, so they stay quiet.”

The tales told by those who do speak up, however, are harrowing.

A police complaint filed last November by a 24-year-old woman from the indigenous Limbu community shows how the traffickers work. According to the complaint, a copy of which was obtained by Asia Democracy Chronicles, the woman was able to return home to Nepal only after almost four years of being forced to work in the Indian sex industry.

“I was told that I would be taken to Pokhara where I had to work in a dance bar from which I could earn a good income,” the woman said in the police complaint. “But instead they used drugs to make me unconscious, and when I woke up, I was in India. They had already sold me.”

The woman claims that she was forced into sex with different people for the next six months at a brothel. “They didn’t stop there,” she said in her complaint. “I was taken to brothel houses in different cities of India, including Allahabad, Kolkata, Bombay, and Koch Bihar.”

“I thought I would never make it to Nepal again,” said the woman. “However, luckily, one day the owner sent me to bring some snacks and from there I fled. I didn’t have any money so I worked in a mobile shop for some months and while returning to Nepal, Indian police caught me at the border.”

She said that she was then taken to a safe house in Darjeeling. “The police also informed the Nepali Embassy in India and with the help of one NGO, I was finally able to return back to Nepal on Oct. 21 last year,” the woman said.

Compared to the Limbu woman, Asmita was more fortunate. She was able to escape her abusive employer after four months. She somehow made her way to the Nepali Embassy in Kuwait and was able to contact her family, who immediately filed a case with the Nepal Police’s Anti-human Trafficking Bureau.

The bureau, in coordination with some NGOs and the embassy in Kuwait, was able to bring Asmita back to Nepal on June 29, 2022. Six days later, Rokka was arrested. He is currently under judicial custody. ●

50 years on: Publisher pushes for grassroots exchanges between Japan, China