Pakistan has successfully registered more women voters in recent years. But millions of these women are still not casting their ballots.

Pakistan’s next scheduled general polls are still more than half a year away. The country’s politics are already heating up, though, especially after the opposition’s stellar showing in the recent by-elections in Punjab province.

Yet even as the gender gap in Pakistan’s electoral rolls seems to have narrowed in the last few years, there is little guarantee that the women who are registered voters will cast a ballot in next year’s polls. In large part, that’s because, in this patriarchal society, that decision is out of the hands of many Pakistani women, and made by the men in their families.

However, some women who have been able to cast a vote without consulting or seeking permission from a male relative now say they may sit out the 2023 general polls.

Twenty-two-year-old dental student Sumblina Amin, for instance, voted in the 2018 elections but is not inclined to repeat the experience next year. She says that she wants more women to come forward and take the seats from men, but no political party seems to be offering that opportunity to women at the moment.

“Right now, I don’t support any political parties because all of them ignore completely women’s issues and have a selective attitude toward other people,” Amin says. “I’ve realized it’s impossible for someone to come into power who actually cares for women’s rights, minority rights, and social issues.”

Meanwhile, a 28-year-old who asks to be identified only as Amal for this story is unsure if she will be voting in the 2023 general elections. She can still remember the first time she cast her ballot: In 2018, when she was already working in advertising. She and her family even traveled 60 km from Islamabad to Gujjar Khan, where they are officially registered as voters.  Amal recalls that she was excited to participate in an election, but she also says that she felt sad that it was a decision that she could not — and still cannot — do on her own.

“I wouldn’t be allowed to travel to another city alone to vote if my family had decided they weren’t going to vote,” she says. “My father decided the whole family will vote in the elections. If he didn’t decide so, I wouldn’t have voted.”

Women in Pakistan gained the right to vote in 1947. When Benazir Bhutto became Prime Minister in 1988, Pakistan gained the distinction of being the first Muslim-dominated country to have a democratically elected female leader. Yet up till now, women in the South Asian nation struggle to be heard and be part of its politics, both as voters and as elected representatives of its people. This is even as the government and civil society efforts to encourage more women to register in order to vote have been pushing up the number of registered female voters since 2017. 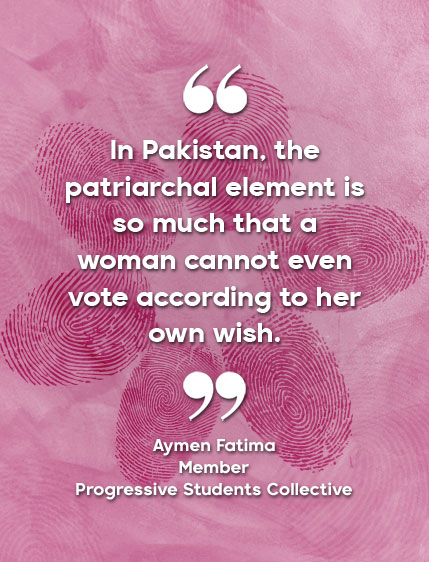 In March last year, the Election Commission of Pakistan (ECP) reported that the gender gap in electoral rolls was at 10.4 percent. By November 2021, the gap had narrowed to 9.74 percent.

In the run-up to the 2018 elections, the ECP and various nongovernmental organizations stepped up their efforts to get as many women registered to vote. In many cases, this necessitated having them acquire national identity cards, which are a requirement in Pakistan’s voter registration.

The ECP also made use of a provision in the 2017 election law that says a vote in a constituency would be considered valid only if a minimum of 10 percent of the women there cast ballots.

A 2018 CNN report said that the Pakistan elections that year saw women turning up at polling sites in “large numbers,” defying “decades of patriarchy and taboo.” But a 2019 research by a team of Pakistani academics and published by the Lahore-based think tank Institute of Development and Economic Alternatives (IDEAS) noted that in fact, only 40 percent of the country’s 46 million registered female voters cast their ballots in the 2018 polls. And while it is usually assumed that the gender gap would be the greatest outside of the cities, the research found that it was larger in metropolitan areas.

The academics then conducted a survey of about 2,500 households in Lahore, one of Pakistan’s largest cities, to find out why urban women weren’t voting. In a blog post summarizing their findings, they reported, “Our results show that the gender gap in metropolitan cities is related to patriarchal norms in the household and individual women’s knowledge of politics and the electoral process. Poor knowledge goes hand in hand with women’s low interest in politics, which is unsurprising in a context in which political parties fail to directly engage women and address their issues.”

Those issues are apparently different from those of the men. Ali Cheema, one of the academics who did the 2019 survey, had done a previous study in Lahore exploring the concerns of women voters. In Cheema’s 2017 survey, respondents were asked to name three important issues they wanted to be addressed in the 2018 elections. Wrote Cheema, “We found that women voters were much more likely to name service provision issues such as electricity (eight percent higher), sanitation (six percent higher), and gas (12 percent higher) in the top three issues, compared to male family members. They were less likely to name corruption (30 percent lower) or purchasing power (eight percent lower) as key issues compared to male members.”

However, 46-year-old Rubina Khalid indicates that in her hometown, parties did make efforts to reach out to women — but only during election periods. Now living in Lahore, she says that she is registered to vote in her home village but has never cast a ballot. She also says she has no intention of ever doing so.

“What will happen if I vote for any party?” asks Khalid. “In our village women are made promises by men that all their demands will be met if they vote for them. But after they vote, nobody visits them again.”

The theory is that more women in the legislature and other branches of government would enable the voices of their fellow women, who make up 48.5 percent of Pakistan’s 227 million people, to be heard. To help make this into reality, a provision in the 2017 Election Act stipulates that five percent of the candidates chosen by each political party to run in an election should be female. Sixty seats in the National Assembly are also reserved for women. Writing in March this year in the Tribune newspaper, journalist Shazia Mehboob Tanoli pointed out that if those reserved seats were excluded, female representation in the present National Assembly would come up to only three percent.

Women who run for office anyway find themselves being harassed and taunted while campaigning; the harassment continues even if by some stroke of luck they win. Those in Parliament are often considered “token” legislators because of the quota and are ignored. And when women politicians appear before the public, the comments are usually not about their abilities, but about their physical appearance.

Some are also made to suffer demeaning sexual innuendos. Just this May, opposition leader and former Prime Minister Imran Khan, referring to the politician daughter of his arch rival Nawaz Sharif, said before a gathering of his supporters, “Someone sent me a clip on social media of Maryam’s speech, somewhere. She took my name so many times and with so much passion, I want to tell her that Maryam, please be careful, your husband might get upset the way you call my name again and again.”

But Aymen Fatima, a member of the Progressive Students Collective and general secretary of the Character Building Society in the University of Punjab, says that women should still stand for public office despite the challenges. She also says that it is important that women run their own campaigns instead of relying on their male party mates.

“In Pakistan, the patriarchal element is so much that a woman cannot even vote according to her own wish,” says Fatima. She adds that husbands usually tell wives whom to vote for, and it is often a person with whom the husband “has political affiliations.”

“The imbalance will remain, but it can be minimized by empowering women economically and socially,” Fatima says. “Women need to be politically aware completely, and for this, they need leadership positions in lower communities. More and more women should contest elections in those areas where their voices are unheard.”

Advertising employee Amal also argues that once they have the ballot in hand, women can choose to ignore what their father, husband, uncle, or brother told them to do.

“No one from your family is around you,” Amal says, noting that a Pakistani voter is usually left alone in a room. “This means you can vote for whomever you want to … despite family pressure to vote for any certain person.”

She concedes, though: “But for that, you need to have full knowledge of politics.” ●

Saba Chaudhary is an independent journalist and activist based in Pakistan. Her work focuses on human rights, gender, and social-political issues.

Saba Chaudhary is an independent journalist and activist based in Pakistan. Her work focuses on human rights, gender, and social political issues.