With the pandemic forcing everyone online, the cyberspace has become a much more dangerous place for women journalists.

For Himanshi Dahiya, just the mere fact of her being has proven to be an occupational hazard.

Dahiya is a multimedia journalist with the Indian digital news platform, The Quint. She dives deep into the complex workings of the cyberspace, covering online hate and disinformation. She holds a postgraduate diploma in journalism and mass communication, as well as a certificate of excellence in longform communications from an international institution.

But online trolls only see one thing about Dahiya: She’s a woman. This is license enough to send untold amounts of vitriol her way, or so they think. “For women journalists in India, it’s difficult.  I think ‘difficult’ would be an understatement. The kind of hate that’s directed at you, it’s very gendered,” Dahiya says.

According to a December 2020 survey by the UNESCO, one in every four women journalists had received threats of physical violence, while 18 percent had been threatened with sexual violence. In some cases, these digital attacks translated into very real harms, with one in five respondents saying they had been attacked offline connected to threats they received online.

Overall, a staggering 73 percent of women journalists who responded to the survey “had experienced online violence in the course of their work.”

The statistics reflect the troubling realities on the ground. All across Asia, women journalists share Dahiya’s frustrations and fears. “Being female, adds to the burden of doing our work as a journalist,” says Len Olea, who runs the online Filipino news portal Bulatlat. “We often get sexist threats, rape jokes, and other sexist remarks.”

Gendered abuse and threats have always been rampant, but now, because COVID-19 has forced everyone indoors and online, the situation has become much worse. No other country spends as much time on the Internet as the Philippines, and the accelerated pivot online last year has ramped up digital harassment.

“Everyone is online more than before, including the trolls,” Olea says.

Cait McMahon, managing director of the Dart Centre Asia Pacific, a non-profit specializing on trauma-sensitive journalism, finds that gendered attacks directed at women journalists as a representation of a larger problem in wider society seeped in a culture of patriarchy. “If we don’t respect women in our daily lives, there is nothing to make us respect female journalists,” she said.

Olea agrees. “In a very patriarchal society like the Philippines, it is very easy to casually talk about a woman’s body,” she says.

Munza Mushtaq is a woman journalist from Sri Lanka and also belongs to the minority Muslim community. She has always been aware of the consequences of her identity, a dangerous double whammy that has often made her a target for online trolls.

“I always seem to assume that for some reason, I am one of the few people who come under attack from all the camps,” Mushtaq says. “I think being a minority also has some sort of an effect… If what I am saying is wrong, fine; but you do not need to criticize somebody for the shape of their body? That’s not anyone’s problem, right?”

“I am quite thick-skinned, but at some point, it affects you. If you’re having a really bad day and then you open Twitter and you see these things, it really affects you,” she adds.

In Sri Lanka, relations between extreme elements within the majority Sinhala community and the minority Muslims have always been tense. After the 2019 Easter Sunday Attacks, which left some 300 people dead, the situation quickly deteriorated, and the unease soon exploded into dangerous and retaliatory rhetoric from both camps.

Since the Easter Sunday attacks nationalist politicians have leveraged security concerns to push for a burqa ban. The proposal is now being consider by the government, though it has said that it will take time to evaluate the merits of the ban, which has been criticized by rights bodies.

Olea, from the Philippines, shares the sentiment. The fraught political climate in the country just makes life worse for women journalists. “Based on our gender, for example, we get sexist comments from government officials. Women have to deal with these kinds of harassment online and even offline.”

She believes that when elected leaders explicitly support, and sometimes even engage in, misogynist behavior, it promotes the idea that there’s nothing wrong with it, and emboldens other people to do the same.

In Cambodia, for instance, journalist Sineat Yon recalled an incident when the Prime Minister was the main conduit for an online attack on a colleague. During an interview, the Cambodian Prime Minister Hun Sen asked Yon’s colleague whether some of her questions had come from Washington – a thinly veiled reference to the US government interfering with the local media.

According to Yon, Hun Sen proceeded to respond to some of the media questions. Soon after, government personnel wrote on social media threatening or attacking because she was brave enough to ask the Prime Minister critical questions that they themselves dared not ask.

The attacks discredit their targets by implicitly stamping badges on them. In the case of Mushtaq, she was an “NGO hack,” while Dahiya has been labelled anti-nationalist.  According to Mushtaq these attacks her credibility as a journalist imposes an implicit but exhausting condition on her, requiring her to reassure her independence and professionalism in every story she does, to every source she speaks to.

At the highest levels of organization, the attacks can start out as well-coordinated political operatives, but eventually, down the line, these get picked up and echoed by like-minded accounts in a much more organic way. Either way, if the attacks persist, so do the unwanted badges. The journalist ultimately suffers—her integrity, her career, and her safety.

Amid the fierce attacks, women journalists feel like they don’t have effective means to face these challenges, especially in the digital realm.

The Quint, which Dahiya works for, has created an environment for its staff that allows them to talk about online abuse and even supports seeking external help. “I have a very brilliant team of editors looking out for me.” In the Philippines, the National Union of Journalists does provide support and training, and Olea says the most effective means of support is building peer support networks.

According to McMahon, since most newsrooms have migrated into the digital space, meetings have concentrated on work-related issues rather than fostering interpersonal connections. This lack of in-person interactions has made women journalists feel more alone and vulnerable, because many of them usually rely on the personal consolation and comfort from their colleagues.

This is especially true for freelancers like Mushtaq, who have to get used to working alone and without effective organizational support, need to devise their own coping mechanisms. “After a while you have your own ecology of facing up to these attacks.” 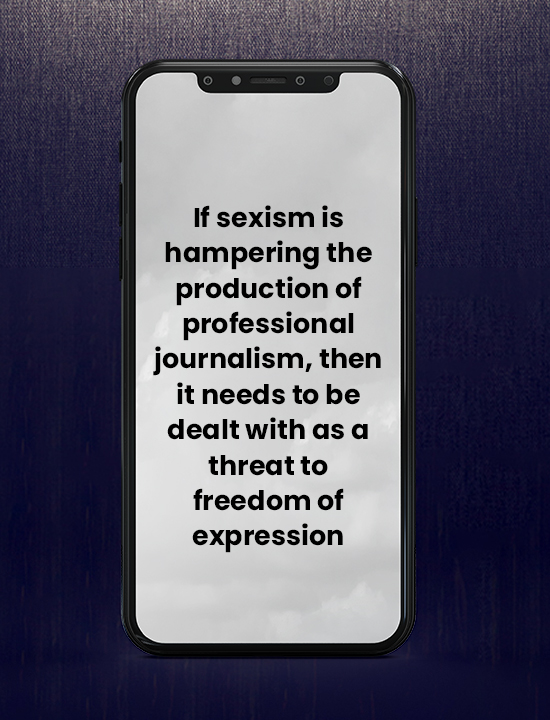 She has tried making official police complaints, but have found out that they don’t get acted on for months. Now, she just mutes the attacks or tries to avoid them the best she can. Sometimes, unfortunately, watching out for yourself is the best recourse a journalist has.

In Cambodia, even though journalists like Yon have begun talking publicly and documenting gendered attacks, she says that pervasive macho-male culture in journalism not only impedes awareness but, on occasion, even bullies progress backwards.

Yon and her colleagues in Cambodia not only call out abusers within and outside of the media but also try to build awareness among newcomers, encouraging them to not condone and stay silent when faced with abuse. The same is true in the Philippines.

“I’m not going to deny that there is a macho culture among our colleagues in the media,” said Olea. “We are very conscious in reaching out to those who have been under attack, and I think that is really a good for many of our colleagues, because peer counselling is most effective form (of building resilience),” Olea said.

In Sri Lanka, Mushtaq acknowledges that as much as there are colleagues who admit the presence of misogyny, there are others who not only lack awareness, but also continue to act abusive towards women colleagues.

McMahon says that journalism as an industry, and journalists as a community, needs to acknowledge the severity of these threats and build resources to counter its impact.  If sexism is hampering the production of professionalism journalism, then it needs to be dealt with as a threat to freedom of expression, she says. “It is a core journalism issue and needs to be treated as such.”

Yon agrees: “It’s about making sure that no one faces these attacks alone, that we have the strength as a community to act against these.”

Amantha Perera has over 15 years of experience as a journalist. His works have appeared in TIME, Reuters, the Guardian, and the Washington Post. He also works as a regional coordinator and trainer for the DART Centre Asia Pacific. He is currently pursuing post-graduate research on online trauma threats faced by journalists and their impact at the Central Queensland University in Melbourne, Australia.

Joblessness will get worse with enhanced community quarantine: think tank

Pakistan’s women influencers are brave in their unapologetic honesty

Amantha Perera is a Sri Lankan researcher at the School of Education and the Arts of the Central Queensland University, Australia. He is in the final stages of his master’s research project on the impact of online trauma threats on journalism during the COVID-19 lockdowns.

Pakistan's women influencers are brave in their unapologetic honesty

Worsening wildfires a reminder that the country lacks clear policies

Afghanistan survived COVID19, but may not survive hunger: AI