A progressive law has eased their burden somewhat, but transgender people in India still have trouble finding regular, steady jobs.

he is only 25, but Tanushree Sahu has already come a long way from where she was just a few years ago.

“Previously, I was employed at a salon in the city,” she recounts. “While working there, I completed my 12th grade. Then, while employed at Nagar Nigam (Municipal Corporation) as a community mobilizer, I found a vacancy in the police department reserved for transgender persons and applied for the post. I got selected for the position and am currently undergoing training.

Sahu, in fact, was recently made constable of the police force in Chhattisgarh state in central India. “The coaching is physically challenging,” she admits. “But, I feel secure in the uniform.”

In India, social stigma and discrimination still make it difficult for members of the country’s transgender community to find decent and steady jobs. But since the passage of the Transgender Persons (Protection of Rights) Act in 2019, some transgender people like Sahu are finally getting a shot at employment opportunities that were previously unavailable to them.

Among other things, the Act prohibits discrimination against transgender persons in educational institutions, health care services, and employment. After the Act was passed, the central government introduced a variety of schemes to help implement and support it, while private companies rolled out hiring plans for members of the marginalized group.

Nongovernment organizations and activists followed these up by ramping up programs aimed at upskilling trans people. At the same time, they initiated awareness programs with stakeholders to ease the transition process and make workplaces more trans-friendly. 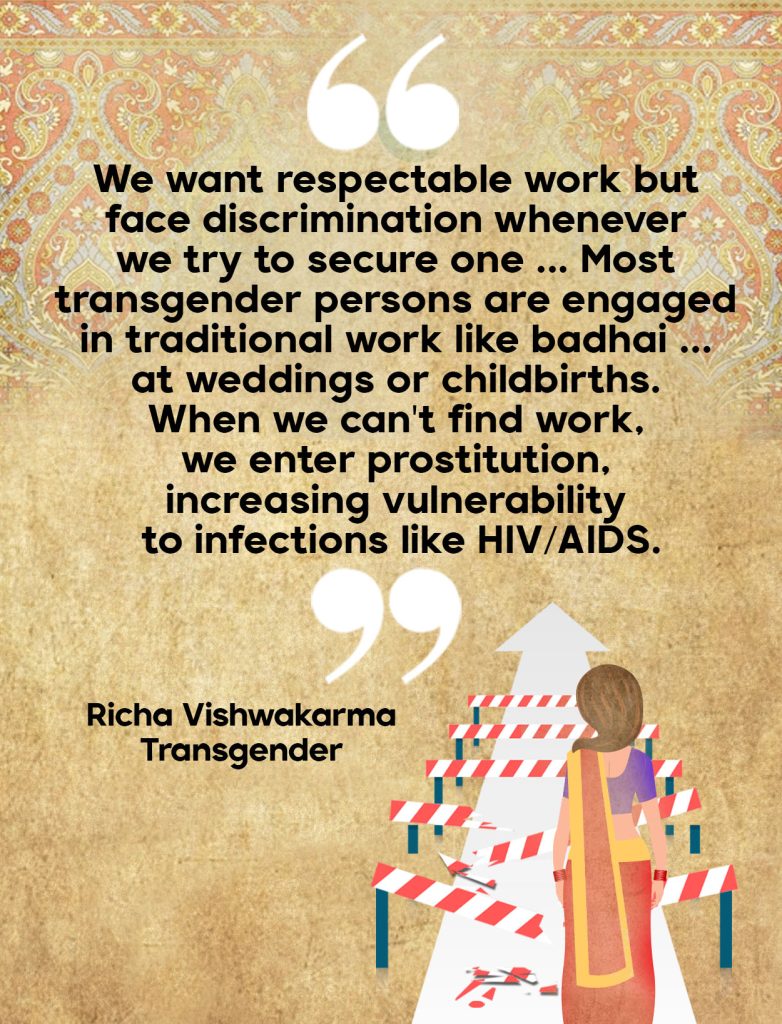 “We primarily focus on skills like English communication, financial and digital literacy, soft skills, interview preparation, and corporate etiquette, which are the prerequisites for employment in modern workplaces,” says Samarth Tyagi, an HR Associate at the Chennai-based PeriFerry. As for the workplace workshops, he says, “All our sensitization programs are facilitated by at least one person from the LGBTQIA+ community alongside a PeriFerry team member.”

Such efforts have been paying off. Through its training program REVIVE, PeriFerry since 2017 has successfully placed some 310 transgender persons with multinational firms like Goldman Sachs, across tiers and in diverse roles, among them technical support, customer support, front desk, ground staff, and human resource. Backed by a sustainability follow-up plan of six months, its placements have had a retention rate of 70 percent.

Bhawani Muni, a forklift operator trainee with the BALCO Vedanta group, says that she is overwhelmed with the respect she receives at the company. She says that before she “learned about this opportunity at the Chhattisgarh Mitwa Sankalp Samiti center,” she had been doing “traditional work,” which for trans people includes dancing at weddings and begging.

“The work environment here is good,” says Muni, 27. “During training, we are supported by the staff. Not only this, but the employers also help us with the paperwork. Moreover, I am getting a fixed salary and other employee benefits. So slowly, even my family’s attitude toward me is changing.”

An uphill — and complicated — climb

But trans rights activists and members of the transgender community themselves concede that problems remain, and far too many trans people are still struggling to find regular employment. Indeed, a year before the Transgender Persons Act was passed, a report released by the National Human Rights Commission (NHRC) said that 96 percent of India’s transpeople are denied jobs, pushing them into sex work and begging for a living. The last national census, done in 2011, placed the number of transgender people in India at 488,000.  But activists say that even more than a decade ago, this could not have been an accurate figure, in part because many transgender individuals hesitate to identify themselves as such in India.

“The major challenge in placing trans persons in corporate jobs is the mismatch of available skills and requirements of the open role,” says PeriFerry process associate Aisrey, who goes by a single name. “Social stigma and discrimination force many transgender persons in India to leave their pursuit of formal education at an early stage. Those who complete their graduation/post-graduation also face challenges securing jobs, as trans-inclusive jobs might be rare. A lack of vital job-ready skills can also be an issue, as there are gaps in the Indian education system in preparing an individual for the demands of the modern workplace.”

Richa Vishwakarma, who is a transgender person, echoes these. “Educational levels are low in the community,” she says.”I dropped out of school because of bullying. Without adequate education, seeking meaningful employment becomes challenging.” In truth, the NHRC report revealed that 52 percent of transgender people had been harassed by their classmates and 15 percent by teachers, forcing them to discontinue their studies.

“We want respectable work but face discrimination whenever we try to secure one,” Vishwakarma continues.”Therefore, most transgender persons are engaged in traditional work like badhai (congratulatory performances that usually involve singing and dancing) at weddings or childbirths. When we can’t find work, we enter prostitution, increasing vulnerability to infections like HIV/AIDS.”

Rights advocates also say that transgenders who manage to land regular work often find themselves in hostile company and become targets of discrimination and abuse. Not surprisingly,  Pushpa Maai, founder of Nai Bhor Sanstha, a community-based LBGTQ+ rights organization in Rajasthan, says that “retention is a problem.”

“It’s a vicious cycle,” she says. “If transgender persons are not treated well in mainstream jobs, they return to their traditional work.”

This is partly why Vidya Rajput, who co-founded Chhattisgarh Mitwa Sankalp Samiti, says that there is a need for advocacy in other areas as well. As Rajput sees it, private-sector employment must be backed by a firm human-resource policy for transgender persons. This may include separate toilets, sex- reassignment surgery leave, and insurance cover, she says.

The good news is that some changes have been going in this direction for some time now. As early as 2019, national media have been reporting that companies like KPMG India and Tata Consultancy Services (TCS) had tweaked their health-insurance policies to benefit the LGBTQ+ community. According to a report by the Times of India, TCS would cover up to 50 percent of the cost of sex/gender reassignment surgery (up to a maximum of INR 200,000 or about US$2,400) through insurance. The report also said that some companies such as Citibank, RBS India, and Capgemini had extended medical cover and family-health insurance to same-sex partners.

The most important change that should take place, however, involves the attitudes of the Indian public toward transgender people and the rest of the LGBTQ+ community. As it is, many transgender individuals have even been disowned by their families after being “found out.” Activist Maai, who is also a member of the Rajasthan Government’s Transgender Welfare Board, points out that the lack of acceptability for trans people in Indian society is such that “even if we train them in salon work, people don’t take (their) services.”

Rajput, for her part, says that government officials themselves need to be “sensitized,” especially those who implement transgender policies. She says, “For instance, to get a transgender card issued, one has to visit the collectorate. But the card-issuing is subject to the sensitivity of the designated officer.”

For many transgender people, the inability to access documents because of an officious or biased, or simply insensitive, bureaucrat means losing access to employment opportunities or even welfare schemes meant to benefit them.

Still, newly deputized Police Constable Sahu believes that people’s attitudes toward members of the transgender community will change once the latter are seen doing “serious” work across sectors.

“Most community members are involved in traditional work like begging and prostitution,” says Sahu. “After taking up the police job, I have seen a change in people’s outlook toward me.”

She also says that her own worldview was limited during her work at the salon. She knew very few people then. Now, says Sahu, she feels part of the wider community.

Another young trans person, Punam Yadav, says that she feels empowered after getting placed as a crane operator with Tata Steel, based in Jamshedpur city in northeastern India. A chemistry graduate, she still dreams of someday working in government. Yadav says, “It will take time for people’s attitude to change toward trans people. But I am happy working here.” ●

Minakshi Dewan is an independent researcher and author based in Gurugram, India. She possesses years of grassroots experience in women’s health, gender, and community mobilization in rural India. She is currently writing a nonfiction book with HarperCollins, India.