The Chinese government’s sudden COVID-19 policy turnaround has its citizens trying to figure out how to live with the virus, even as some youths say that they will keep on pushing for more action from authorities.

onfusion has ensued as the Chinese central government continues to roll back its strict COVID-19 protocols, but many of those who participated in the protests that triggered the sudden policy change say that at least authorities were spurred to react.

“They are easing the lockdowns to address our grievances,” says a 20-year-old student from Shanghai who was among the throngs protesting in the streets in late November 2022. “I feel like everyone’s hard work is paying off.”

But the student, who asks to be identified only as “Y.Y.”, says that the central government’s turnaround is proving stressful for his mother, who has lymphatic cancer.

“The change in COVID policy is not a relief to her,” says Y.Y. “Seeing chaos emerging — long queues outside clinics, runs on medicines, food shortage and panic buying — my parents want a lockdown instead. They simply want to live.”

He says the government is at fault. Notes Y.Y.: “We had been told COVID is deadly for the past three years. Therefore, anxiety is inevitably shooting up for many people, especially for those belonging to the older generation like my parents. They don’t even know it’s safe to be around someone who’s recovered. When the central government was implementing strict COVID controls, no one dared to teach you common-sense knowledge. And now (authorities) are now coming out to emphasize that Omicron is no longer as harmful.”

Up until a few weeks ago, China had been following a strict zero-COVID policy, which meant frequent testing and lockdowns. The policy disrupted the daily lives of the country’s 1.4 billion people and damaged what had been a thriving economy. When an apartment blaze killed at least 10 people in Urumqi, Xinjiang province on Nov. 24, there was widespread speculation that the COVID restrictions were to blame for the inability of the firefighters to save more lives. Protests broke out across China, with the demands even including that President Xi Jinping and the Chinese Communist Party step down.

By Dec. 7, the central government was announcing an easing of COVID-19 rules, and the protests simmered down. China’s state media, however, shied away from discussing the protesters’ demands, instead portraying the policy U-turn as a result of other factors, including a “weaker” Omicron and the success of China’s three-year battle with the virus.

Since then, infections, along with confusion over how to live with the once-feared virus, have been spreading. Despite the government’s efforts to inoculate as many elderly as possible after abandoning its zero-COVID policy, only 60 percent of people aged 80 and over have received three vaccine doses. There are now fears that China may be facing its deadliest COVID-19 wave yet, largely because of the low vaccination rates among the elderly, and complicated by an inadequate health care system.

For sure, the new COVID rules are putting China to the test as cases of infection from the virus surge. Just last Dec. 11, over 22,000 patients visited Beijing’s “fever clinics” — 16 times more than a week earlier. An Agence France Press report also said that two Beijing funeral homes the media outfit contacted confirmed that they were already operating 24 hours a day yet were still overwhelmed by the surge in demand. Hospitals and pharmacies are low on medicine and antigen tests, and delivery drivers are falling sick, meaning residents are struggling to purchase daily necessities, a spokesperson for the Beijing Municipal Health Commission admitted. Whether people from second or third-tier cities can even access medical resources is now in doubt. 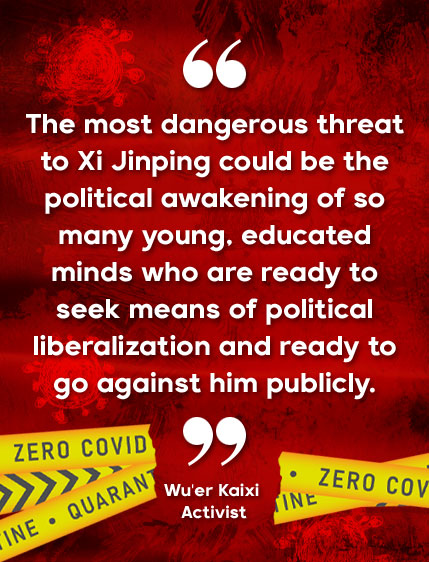 Another young protester from Shanghai, who wants to be known only as “Zhang,” says, though, that she is satisfied with the return to relative normalcy.

“No improvement is without pain,” says Zhang, who is a law school graduate. “Perhaps this is our price for freedom. Time will tell whether it is worth it or not.”

And yet she says that is still filled with anger and frustration. She wants the government to apologize and admit that “zero COVID” was a grave mistake.

“Until now, the authorities are still lying, just like concealing the truth about the origin of COVID,” Zhang says. “How come only 11 official deaths have been reported from COVID since mid-November? We’ve had over ten thousand daily infections since then! They are fooling us again and again!”

According to data published by China’s health ministry, there has been a decreasing trend in COVID cases. On Dec. 18, a total of 3,913 new COVID cases were reported — a decline from the numbers reported on December 16 and 17, which were 4,515 and 4,125, respectively.

Some observers say that China’s leaders would do well to listen carefully to the protesters, most of whom belong to the younger generation. Wu’er Kaixi, one of the principal leaders of the 1989 Tiananmen protests, tells ADC: “As unprecedented as these protests are, it’s unlikely to challenge the staying power of the Communist party’s rule at this moment. But I would say it’s the prelude. The protests marked the beginning of the end for the party.”

Indeed, the COVID protests are the largest anti-government movement in China yet since the Tiananmen Square protests. And yet most of the recent protesters have little or no recollection of the massacre more than 30 years ago. Not only were they not yet born when it happened, there is also no footage available on the internet, which has been under the tight grip of the state.

“The fear of the regime is not passed on to the new generations, ” says Wu’er Kaixi, who is now based in Taiwan. “In a way, the most dangerous threat to Xi could be the political awakening of so many young, educated minds who are ready to seek means of political liberalization and ready to go against him publicly.”

Y.Y. himself says, “I have seen so many brave faces. I have faith and courage again. I feel excited about the demonstrations and all those political slogans.”

“I have always thought among my generation that politics are just not relevant or important as social stability,” he continues. “But I was wrong. It’s not people getting more radical, it was only the elephant in the room that grew too big.”

Y.Y. says that many of his peers say that they wouldn’t hesitate to march on streets fighting for justice or contribute in other forms — for example, sharing slogans with subway riders through iPhone’s Airdrop or writing them as graffiti on public toilets. Zhang meanwhile says that she plans to spend more time talking to her parents, and to try to win them over. Next time protesters make their voices heard, she says, they will have more supporters on their side.

In fact, unlike the 1989 protests, the more recent ones had not been limited to university students in the capital, but had students and the middle class uniting together in towns and cities across China. With Xi losing the two of the most critical bases of political support in China — university students and the middle class — it’s not hard to agree with Wu’er Kaixi who believes that the seeds of fighting for rights have been planted in the hearts of many Chinese citizens.

Still, even the former 1980s student leader does not want to overestimate the significance of this protest, pointing out that the power of its authoritarian rulers remains formidable.

Political scientist Chen Daoyin, who was formerly with the Shanghai University of Political Science and Law also says, “Submission is not Xi Jinping’s thing. He will perceive the protests as the bud of a color revolution and will deal with it as such. The Party has always relied on terror to rule and it will continue to shift toward totalitarianism, this is for sure.”

In truth, since Xi came to power a decade ago, he has enacted a sweeping crackdown on civil society, shutting down independent non-government organizations and outspoken media outfits, as well as arresting journalists and rights advocates. Some China observers say that the authorities will now be stepping up control, crack down even harder on civil society, and invest more heavily in surveillance systems to keep track of citizens’ movements.

Zhang the protester expects as much from China’s leaders. She says, “Xi has only recently secured a third term in office. Didn’t you see how he lectured Trudeau at the G20 Leaders Summit? He will definitely quash dissent in his kingdom by all means.”

Already, security forces have been moving swiftly to snuff out any protest, even as health departments try to please the public by easing antivirus controls. Police officers have also stopped people in the streets to check their IDs and search their phones, apparently looking for evidence of involvement or support for the demonstrations.

Observers, however, point out that people went to the streets and protested after the Urumqi fire anyway, despite being aware of what authorities could do to them in retaliation.

“The Communist Party has a long and brutal history of cracking down on protesters,” says Wu’er Kaixi. “The foundation of the Communist Party is unlikely to be destroyed by a decentralized movement or mass civil disobedience. But the recent protest is just the tip of the iceberg. They are a sign that the trust people had in their government has eroded.” ●

Kristen Wong is a humanitarian worker with a focus on mainland China. She formerly worked as a Beijing correspondent for a Hong Kong news agency.

Kristen Wong is a humanitarian worker with a focus on mainland China. She formerly worked as a Beijing correspondent for a Hong Kong news agency.