China's twisted relationship with the media has spread beyond the country's so-called “Great Firewall.”

n Nov. 29, 2022, the Cyberspace Administration of China called for “strict management and control of content” in an effort to contain the widespread protests that broke out against stringent restrictions imposed by the Chinese Communist Party’s “zero-COVID” strategy.

In the leaked official documents, the guardians of CCP’s “Great Firewall” instructed crackdowns against virtual private networks and the banning of keywords that helped connect the mobilizing citizens. Officially called “Level I Internet Emergency Response,” the set of directions encompassed a range of tactics aimed to muffle knowledge of the protests, divert attention away from the people, and avoid further inflaming the popular sentiment.

Beijing’s efforts to control information are nothing new, of course, and have been quite well-known even outside of China. What is not talked about much, however, is China’s move to control narratives involving its interests beyond its borders.

This obviously includes Asia, its home region, and where it has been having territorial disputes with several of its neighbors. This is also why while China’s unprecedented wave of protests in late November was widely reported on around the world and put Chinese authorities in a rather unflattering light, some Asian media sources were still trying to portray Beijing in a positive manner. (See Graph 1.)

Graph 2. Despite massive protests and lockdowns, media reports on China in Cambodia, Thailand, the Philippines, and Singapore put Chinese authorities in an unflattering light. But a significant portion of the news continued to portray Beijing in a positive or neutral light.
Source: GDelt summary data, last accessed Dec. 5, 2022

In the two weeks or so that angry Chinese citizens defied the authorities and protested in streets across the country, almost half of the news about China that came out of the media in Cambodia, Thailand, the Philippines, and Singapore were fairly neutral and positive. (See Graph 2.) These stories even mentioned Xi Jinping and the CCP, even as violent crackdowns against protesters calling for the ouster of both Xi and the party were going on.

These were borne out by GDelt, a database that tracks global news media coverage and digital conversations using natural language processing and machine learning. In fact, using GDelt’s sentiment summary, some of the stories that came out during that period included extremely hopeful ones on the China-Laos railway, the China-South Asia expo, and Xi “hustling” in the G-20 summit to “challenge U.S. outreach.”

For sure, these could have been just the media reporting objectively. But there is a surfeit of indications that there is more to these than meets the eye.

In truth, in the last two decades — and especially after Xi Jinping took power in 2013 — China has aggressively expanded its efforts to influence international media coverage of the country. The CPP’s official website spells out the policy as the Chinese government exercising its “right to speak in telling good Chinese stories” or “telling China’s story well,” which was taken directly from Xi’s infamous 2013 Politburo speech.

In a 2015 paper, political scientist Anne-Marie Brady described the scale and range of China’s investment in its “foreign-propaganda activities” as “so great that it would be impossible to come up with an accurate annual budget.” She said that figures between US$7 billion and US$10 billion had been bandied about, but noted that “these figures include only the subsidies given to media targeted at non-Chinese foreigners.”

In 2009, Beijing committed CNY 45 billion (about US$7.25 billion) to the international expansion of Central China Television, the Xinhua News Agency, and People’s Daily, its three state media giants. In 2016, CCTV relaunched its foreign operations as the China Global Television Network, expanding its reach to more than 70 countries.

These changes went largely unnoticed in the first half of the decade. But their persistence and ubiquity later became apparent to the global public as two major battles ensued in covering China and the CCP’s policies: the Hong Kong protests and the Xinjiang concentration camps.

The aggressive crackdown on Hong Kong-protest coverage in 2019 revealed a concerted effort by official and affiliated Chinese media to tone down or reframe the violent dispersal of demonstrators. Furthermore, the event uncovered a sizable group of social media-based misinformation operatives working to further Beijing’s objectives, with at least 200,000 anti-Hong Kong protest Twitter accounts turning out to be part of a disinformation network originating in mainland China. (See Graph 3.)

Graph 3. While authorities cracked down on the news coverage of the Hong Kong protests in 2019, Twitter detected a sharp rise in social media accounts — part of a large-scale disinformation network — with origins from mainland.
Source: Twitter’s content moderation data, compiled by ASPI

While over 28,000 of these accounts were consequently banned from the platform, the network nevertheless managed to cumulatively put out at least 14 million tweets. An Australian Strategic Policy Institute report has also shown how the same strategy was used to cover up the hamleting of Uyghur Muslims in Xinjiang.

Yet, even after China’s city of Wuhan was pinpointed as Ground Zero of the COVID-19 pandemic, a 2021 report by the International Federation of Journalists (IFJ) showed that the CCP was still able to muster a boost in its reputation, thanks to the combination of official media partnerships and misinformation networks. In fact, in IFJ’s survey across 54 journalist unions from 50 different countries, 56 percent of the respondents said that news coverage about China and the CCP has largely been more positive since the pandemic began. (See Graph 4.)

Graph 4. By 2021, majority of media coverage on China had become more positive. This is due, in large part, to official partnerships with local media in various countries and misinformation networks.
Source: International Federation of Journalists report 2021

There is, however, more to the CCP’s sweeping influence in media outlets across Asia than simple cover-ups and diversion for Beijing’s image. Looking at China’s four neighbors wherein local media coverage of Beijing’s recent crackdown on protesters was fairly benign, alliances between Chinese and local media appear to have served not only Beijing but also the interests of other autocrats in the region.

Compared to other East and Southeast Asian countries, China has a lot of power in the media in Cambodia, Thailand, the Philippines, and Singapore, according to research from Doublethink Lab, a nonprofit alliance that studies the effects of Chinese influence operations and disinformation campaigns. (See Graph 5.)

Influence vs Presence, in scores

This influence, which Doublethink defines as “the power to affect the decisions of other countries so that they align with the … interests of the PRC,” was graded based on a survey among selected regional partners and professionals. 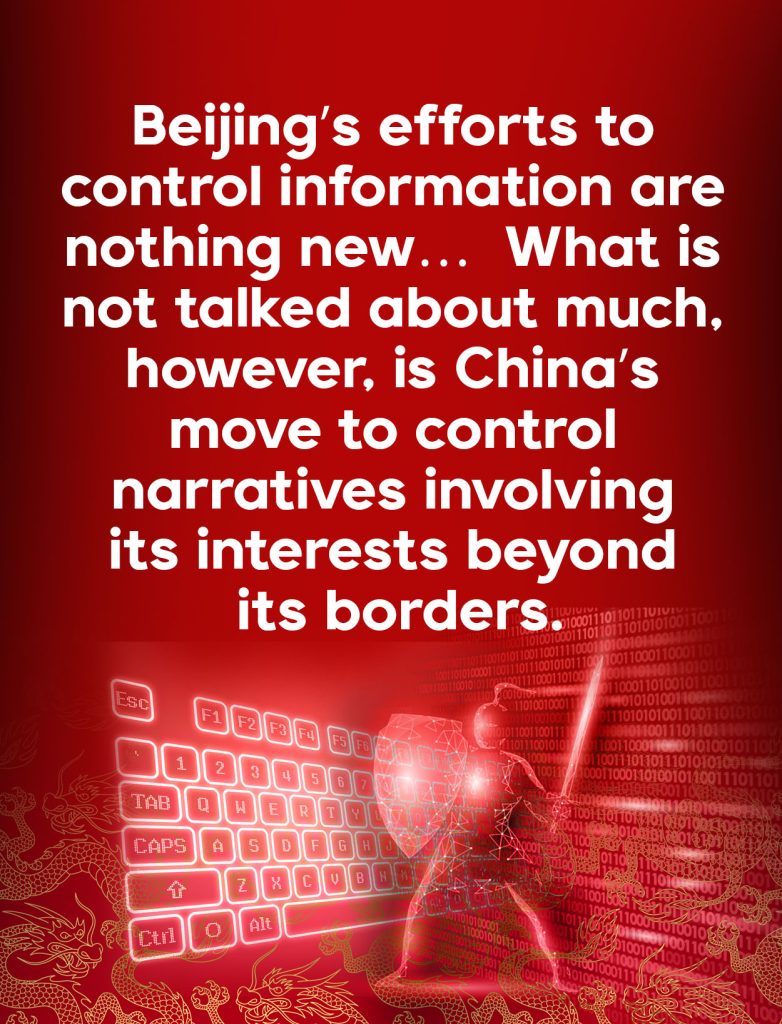 But there’s more. While the editorial team in Beijing gets to cast a shadow over the media landscape in these nations, the media alliances also reflect a show of force not only for Beijing but also for increasingly authoritarian regimes and their local supporters.

TNN24, Thailand’s leading news network, and Khaosod, Thailand’s leading newspaper, are just two of at least 12 news organizations and websites that had signed content-sharing agreements with Xinhua by late 2019. Some of these media outlets, according to the Council on Foreign Relations, are also owned and controlled by the military-monarchical alliance that has been successful in thwarting Thailand’s democratic forces.

In Indonesia, MetroTV signed a similar agreement with Xinhua and has seen Indonesia-China relationship influencers gain prominence, such as Chinese Ambassador to Indonesia Lu Kang, who is also close to the Joko Widodo government.

Under Rodrigo Duterte’s government, which ended its term on June 30, 2022, the Philippines’ Presidential Communications Operations Office signed multiple agreements with Beijing to share content and collaborate on media production, among other things. The office oversees the Philippine News Agency and other state media outlets.

The main objective of these and other maneuvers, however, is clear: to shift public opinion more positively toward China. Indeed, a 2020 survey of people living in the Philippines, Singapore, and Malaysia shows a significantly positive opinion of Beijing and its policies, despite these countries’ territorial disputes with China over parts of the South China Sea.

Yet, a recent systems overview of China’s influence in selected countries shows that some are more resilient than others, despite receiving more attention from Beijing. (See Graph 6.) Published by the U.S.-based think tank Freedom House, the report’s findings indicate that a government’s democratic values influence the extent to which Beijing can effectively shape public opinion in a country.

Taiwan, despite being one of the highest-scoring countries in terms of China’s media presence, has successfully resisted Beijing’s influence, at least according to the assessment of experts.

However, despite Beijing’s relatively lower levels of exerted pressure, India and Sri Lanka are more susceptible to the CCP’s media maneuvers due to their lower resilience. The CCP’s ties to the Sri Lankan elite have given them direct and unprecedented access to state-owned media, including the Daily News and the Daily FT.

When it comes to China’s multibillion-dollar media offensive, some experts say it couldn’t have come at a worse time. As renowned Indian journalist Ravish Kumar describes it, “what we have today is truly the ‘dark age’ of journalism.”

Indeed, Asia Pacific has been named one of the deadliest and worst places for journalists in 2021, topping lists of unresolved killings and attacks on media workers.

Graph 7. China has placed significant investments in Singapore and Indonesia. But while investments in countries like India and Sri Lanka are much lower, China seems to have more influence over the media in these South Asian countries.

For instance, Taiwan, despite being among the countries with the highest scores in terms of China’s media presence, has successfully resisted Beijing’s influence, at least according to the assessment of experts. (See Graph 4.)

By contrast, despite being subjected to relatively lower levels of exerted pressure from Beijing, India and Sri Lanka have been more susceptible to the CCP’s media maneuvers. (See Graph 7.) In the case of Sri Lanka, the CCP’s ties to the country’s elite have given the party direct and unprecedented access to Sri Lanka’s state-owned media, including the Daily News and the Daily FT.

Some experts say that China’s multibillion-dollar media offensive couldn’t have come at a worse time. Says renowned Indian journalist Ravish Kumar: “What we have today is truly the ‘dark age’ of journalism.”

According to Reporters Without Borders (RSF), press freedom in East and Southeast Asia has gotten much worse in just one year, from 2021 to 2022. (See Graph 8) RSF has an annual index measuring press freedom, and its most recent report says that the 23 countries in the region as a whole have lost 50 points from the previous year, with only 10 showing small to moderate improvements. Nineteen of the 23 are in the bottom half, demonstrating the fragility of press freedom in the region.

Graph 8: Press freedom in East and Southeast Asia has become much more fragile in 2022.
(Source: Reporters Without Borders)

Not surprisingly, Asia Pacific was named one of the deadliest and worst places for journalists in 2021, topping lists of unresolved killings and attacks on media workers. ●