As the world commemorates International Human Rights Day, the Philippines is haunted by the ghosts of its past and the terrors of its present.

oday thousands of protesters are expected to stand at the gates of Malacañang Palace, the seat of power for the recently elected Philippine President Ferdinand Marcos Jr., the son and namesake of the late dictator. A dictator whose legacy of extrajudicial killings, forced disappearances, unbridled corruption, and media repression is feared to continue under the new Marcos regime.

Read a press statement issued by an organization of Martial Law victims and political prisoners on Sept. 21, the 50th anniversary of the darkest chapter in Philippine history: “While our physical scars may have already healed years ago, our trauma and pain brought by such dark times remain. And now, with the return of the Marcoses in Malacañang and the absence of justice for those whom they had victimized over the years, it feels like we are walking in another nightmare.”

Indeed, justice remains elusive for those who were summarily executed, disappeared, and victimized half a century ago. The majority of the cases related to the rule of the late strongman still haven’t even been approved, let alone heard in courtrooms.

Out of an estimated 107,638 cases, only 11,103 have been vetted and approved as involving “legitimate” victims who may be compensated as soon as the legal dust clears. The number of approved cases translates to a mere one in 10 that will be considered to be eligible for justice as of now.

Compensation cases for violations of human rights in the Philippines

Graph 1. The pie chart shows the estimated number of human rights violations victims (Amnesty International) in the Philippines under Martial Law, broken down into those cases approved by the Claims Board, Pending Cases (cases have been filed but have yet to be approved), and those Unaccounted for (cases that are yet to be filed).

It also means the cases of 41% of those allegedly killed or disappeared, over 93% of those who experienced torture, and 99% of Filipinos illegally detained in the 20 years of Martial Law were deemed as not eligible for justice.

Graph 2. The bar chart shows a comparison of estimated cases vs. approved cases of human rights violations according to the Claims Board, disaggregated by type of violation.

Some of those who managed to survive Martial Law, though, will no longer see justice done — let alone the rise to power of the perpetrator’s son — even if by some miracle they were included in the “approved” cases for compensation.

Martial law victim Adelaida Macusang of Davao de Oro, who worked as a peasant organizer for the Montevista Farmer Association until her arrest in 2018 on trumped-up charges, survived a Marcos dictatorship but perished under Rodrigo Duterte’s.

Media reports said she died of cardiac arrest and kidney failure in May 2020, while still in detention in Davao de Oro’s decrepit prison and at the height of the COVID-19 pandemic. She was 61 years old.

Like Macusang, others who had been considered “enemies of the state” during the administration of the late dictator Marcos and then came into loggerheads as well with subsequent regimes also perished in jail, among them activists Vicente Ladlad, Adelaida Magpatoc, and Randall Echanis.

Meanwhile, the Philippine government has yet to recover the majority of the estimated US$15 billion that the Marcoses stole from public coffers.

Since 1987, the Presidential Commission on Good Government (PCGG), the state agency tasked with going after the ill-gotten wealth of the Marcoses, as well as of their relatives and their cronies, has so far been able to recover PhP174 billion (US$3.1 billion), or less than 20% of the estimated sum.

Recovered assets by the Presidential Commission on Good Government, in cash

Graph 3. The pie chart shows the total ill-gotten wealth of the Marcoses recovered by the PCGG since 1987, broken down into destination/beneficiary.

As of last year, there were still 1,856 pieces of real and personal property, worth a total of PhP125.98 billion (US$2.27 billion) under litigation.

Most Martial Law victims have yet to benefit even from the amount already recovered by the PCGG. Of the PhP174 billion that the agency says it now has, only six percent has been given or allocated to the victims as compensation. Worse, an estimated PHP76.5 billion (US$1.38 billion) went to the Coconut Levy Trust Fund (under Republic Act 11524) which has since become highly contested. 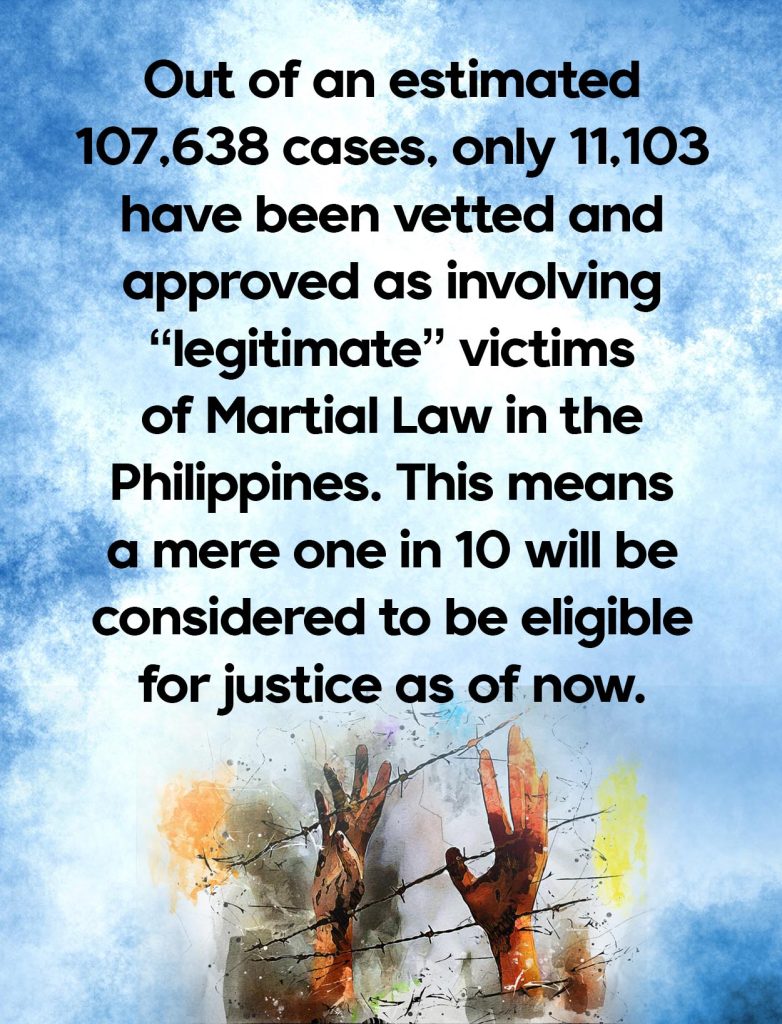 Between 1973 and 1982, coconut farmers paid a special tax called “coco levies”; the monies were later revealed to have been siphoned off by the Marcoses and their cronies. In 2012, the Supreme Court ruled that while these were public funds, they were supposed to solely benefit the country’s coconut farmers and the coconut industry.

In June this year, then President Rodrigo Duterte signed Executive Order No. 172 or the Coconut Farmers and Industry Development Plan, which gave the government free reign over the funds. Recently, PhP250 million (US$4.5 million) was allocated for Duterte’s home region, Davao. However, Philippine Coconut Authority administrator Romulo J. dela Rosa has been quoted as saying that “a portion” of the PhP76.5 billion would be used for research and development, as well as scholarships for the children of coconut farmers.

For sure, though, what those billions of pesos can buy now would be a far cry from what they could have purchased decades ago, or even just a year ago. Along with the political comeback of the Marcoses and their friends, the exorbitant food prices that plagued the Philippines in the late dictator’s final years in power have also returned. This November, inflation skyrocketed by eight percent, a 14-year high, with food prices up by at least 10% from last year.

Graph 4.  The line chart shows a steep rise in food and non-food prices in the late dictator’s final years in power. The same situation is happening under the administration of his namesake son, Marcos Jr.

Worst of all, the extrajudicial killings and human rights violations that characterized the 20-year reign of the late strongman Marcos are still happening today.

Comparison of human rights violations in the Philippines across three regimes

Graph 5. The bar chart shows cases of state-led violence under the regimes of Marcos Sr., Rodrigo Duterte, and Marcos Jr.

While estimates of human rights violations are limited to those reported, categorized as such, and those that make it to the media, there is already a sizeable amount of alleged violations in just the first six months of President Marcos Jr.

Not unlike during his late father’s brutal regime, the victims so far under Marcos Jr.’s reign include farmers, journalists, indigenous people, and activists. Moreover, recent reports indicate that Duterte’s violent “war on drugs” continues under the new government.

For many Martial Law survivors and younger human rights advocates, the nightmare has yet to stop. ●

Capital budget up by 5 percent in this FY

Return of Afghan floggings as Taliban takes a hardline path