Those who do the dirty work

Religious minorities who make up the majority of Pakistan’s sanitation workforce fear they may never be able to escape their dismal work conditions.

hehzad Masih and his colleagues thought of going to court to fight for their rights. They were warned, though, that the move could backfire. So their small group of 12 decided on holding a short protest. But instead of having it right where their local government bosses hold office, they had it in front of the local press club just outside of Lahore in Pakistan’s Punjab province. One local media outfit ran a report on their demonstration.

That was last March. As 2022 nears its end, nothing has been done on any of the issues they raised. This surprised no one, including Masih and his friends.

This is not only because Masih and company are sanitation workers, who are held in low regard in Pakistan. It is also — perhaps largely — because they also happen to be Christians, who are among the religious minorities subjected to abuse and discrimination in the predominantly Muslim country.

Pakistan is an Islamic republic and 96.47% of its population are Muslims. The rest — some eight million people — include Hindus, Christians, Sikhs, Zoroastrians, and Muslim minorities such as the Ahmadis. Yet while they are a tiny percentage of the country’s entire population, it has long been an open secret that Christians and members of other religious minorities make up at least 80% of Pakistan’s sanitation workforce: sewage workers, garbage collectors, street sweepers, and toilet cleaners.

Last May, just two months after the protest of Masih and his co-workers, the National Commission for Human Rights (NCHR) of Pakistan released a report highlighting what it called the “systemic discrimination against minorities.” Specifically, it looked at the plight of members of religious minorities who like Masih end up doing sanitation work simply because they cannot find jobs elsewhere and are forced to do dangerous tasks at below minimum wage.

The report received adequate coverage in mainstream media and led to three out of Pakistan’s four provinces so far banning ads that essentially imply that sanitation work is suited only for non-Muslims. Yet on the ground — and especially in the sewers — little has changed.

“There have been some announced changes in rules and policies for sanitary workers in media, but, in reality, we have been waiting for years for the enforcement of these rules,” sanitation worker Iqbal Masih told ADC. “The situation hasn’t changed where I am working. We are so hopeless now that we don’t raise any questions or voice out anymore. We clean everything even in extreme weather conditions, yet sometimes we don’t even get paid on time.”

In fact, a number of campaigns and policies had been launched in recent years aimed at improving the conditions for Pakistan’s sanitation workers. But all eventually went nowhere. In 2015, for example, the central Services and General Administration Department issued a notification amending rules to ensure that minorities would no longer be associated with menial jobs, including sanitation work. Such jobs, however, kept being passed on to religious minorities. Seven years later, the NCHR released its report that only proved the situation has remained the same. 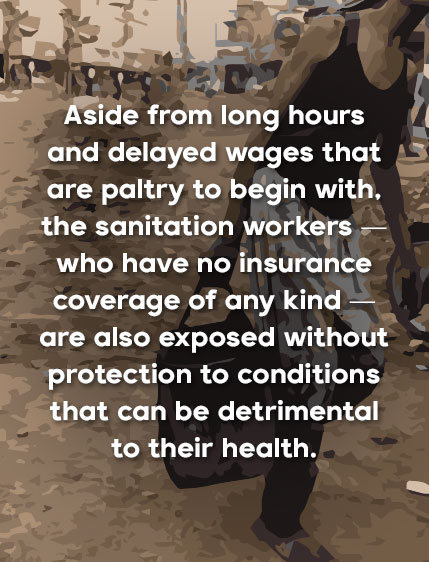 “The practice of sanitation work in Pakistan is religion-based,” commented social activist Qamar Mehmood. “Governments in Pakistan have failed to implement labor laws and to acknowledge (the minorities’) works.  The discussions about improvements remain in the elites’ room without implementations.”

“I don’t know if there is a quick solution to this,” he added, “but it will take years to resolve their issues.“

Those issues run the gamut. Aside from long hours and delayed wages that are paltry, to begin with, the sanitation workers — who have no insurance coverage of any kind — are also exposed without protection to conditions that can be detrimental to their health.

Observed the NCHR in its report: “(When) workers descend into the sewage system, the tools they are given are rudimentary at best: a rope to help them lower themselves into toxic waste, a bamboo stick to dislodge the solid waste blocking the gutters, and a bucket to fill (with) the waste they remove …. In many cases, when they manually dislodge the solid waste, toxic gases are released that can, at best, knock them out, and at worst, kill them.”

Indeed, the report opened with a story about three sanitation workers who were on their day off but were ordered to report to the office and manually unclog a sewer. One survived the poisonous fumes, but the two who had gone back to rescue him died. Two other sanitation workers died while on duty as the NCHR was completing its report; two more died weeks after the report was released. According to the commission, the majority of the workers who “lost their lives in sanitary work-related accidents or complications” between 2011 and 2021 were non-Muslims.

The NCHR also said that non-Muslims usually face “systemic barriers to decent work” and pointed to a “generational cycle of job immobility and economic entrapment” among religious minorities. “Reasons for the economic immobility,” it continued, “range from poverty, job entrapment, lack of education and opportunities, social discrimination, and remnants of an age-old caste system.”

All of the men in Shehzad Masih’s family, for instance, are in sanitation work. The 50-year-old has been employed by the same local government for the last 12 years, but he has yet to become a regular employee. If he is lucky, he gets paid PKR 17,000 (US$75) a month, which is still way below the national minimum wage of PKR 20,000 (US$89).  Many times, he is paid PKR 13,000 or PKR 14,000 (US$58 or US$62). He said that he has not had a wage increase since he began working for his current employer. Among the issues he and his friends had wanted to highlight during their protest was their meager pay.

Masih lives in a rented house, for which he pays PKR 6,000 (US$27) a month. A father of two daughters, he said that he cannot afford to give his children an education.

The lack of educational qualifications is often pointed out as one of the reasons why non-Muslims do not get jobs beyond menial ones. But according to NCHR, religious minorities still miss out on higher positions even with proper qualifications.

The U.S. State Department’s “2021 Report on International Religious Freedom: Pakistan” meanwhile cited the case of the Punjab Public Service Commission, which last year posted an ad for 12 job openings. Recounted the report: “The advertisement stated, ‘According to clause (5) of the Punjab Waqf Properties Ordinance 1979, no person may be appointed an officer unless he is a Muslim.’ Religious minority groups said the advertisement was discriminatory because it singled out Muslims as the only persons eligible to be appointed to positions of leadership at the commission.”

In truth, many local governments have tried to fill the mandatory five-percent quota for minorities in government at both the local and federal levels with sanitation work. Yet in September last year, reports were rife in mainstream media that more than 30,000 government positions reserved for minorities had been left vacant.

Indications are that part of the problem is attitudinal. Random spot interviews by ADC on the streets of Lahore reveal that few have really paid any attention to the sanitation workers or to media reports about them. Several held negative stereotypes of non-Muslims. Activist Mehmood also remarked, “A few years back, there had been news of doctors not touching their Christian sanitation-worker patients because they were non-Muslims and hated them. And this kind of behavior is still in rural areas.”

Asia Democracy Chronicles also asked an official of the district in which Masih and his friends work about their concerns. The official, who declined to be named, said dismissively that those who had staged the March protest were not under her.

She said, “Their problems are under the federal government and require policy changes about sanitation workers. Sanitation workers are already aware they would face such kind of problems before coming to this field.”

It’s no surprise then that Iqbal Masih said, “I don’t see any signs of improvement because nobody, in reality, listens to our concerns. They would make promises like they will solve our problems, but you see, when there was COVID, we weren’t even given safety equipment to work.“

But then there are a few people, like Muhammad Imran, a factory worker and Lahore resident, who told ADC, “It is true that Christians and sanitation workers in this country have some issues. Their issues should be resolved. The job of a sanitary worker is more difficult than anyone in other fields.”

“The government and human rights activists are doing their best to highlight and acknowledge their issues,“ Imran, who is Muslim, also said. “I am hopeful that the people of Pakistan will consider these workers human beings also.“ ●

Saba Chaudhary is an independent journalist and activist based in Pakistan. Her work focuses on human rights, gender, and social-political issues.

Saba Chaudhary is an independent journalist and activist based in Pakistan. Her work focuses on human rights, gender, and social political issues.