Decades after Nepal’s violent communist insurgency ended, the conflict’s victims are still waiting for the perpetrators of the abuse, enforced disappearances, and murders to be brought to justice.

or the last 24 years, Shanta Dhakal has been knocking on the doors of different government agencies and a transitional justice commission to know the whereabouts of her husband Ganesh. On May 17, 1998, Ganesh Dhakal was arrested by Nepal’s security forces, who accused him of association with the then-rebel Maoists.

Shanta has not had any update on him since, despite her frequent inquiries. “I have spent more than two decades of my life in search of my husband,” she says. “I just want to know whether he is alive or dead. How long do I need to fight to get the answer to that question?

Man Kumari Ranjtikar knows how Shanta feels. In 2005, her husband Rajbhai was abducted by Maoist combatants, who accused him of spying on them. Kumari is still searching for information on what became of Rajbhai. She says, “All I am doing is living [in the] hope that I will know one day where my husband is. I have no other options left.”

Ganesh Dhakal and Rajbhai Ranjitkar are among the hundreds of individuals who were forcibly disappeared by the Maoists and the state security forces during the communist insurgency in Nepal that claimed close to 17,000 lives. They and their families are also among the thousands still waiting for recognition and justice for what was done to them during the decade-long insurgency.

But as yet another administration is poised to take over the reins of power in the Himalayan country, few are optimistic that those caught in the crossfire decades ago would finally gain justice. Indeed, political parties in Nepal have all said that concluding the transitional justice process is their priority. Yet once they get into office, nothing in that direction ever really gets done.

Speaking before the Nov. 20 elections took place, human rights activist Charan Prasai pointed out that the warring parties who perpetrated the atrocities committed during the conflict have spent the last 16 years in power. He said that they are always attempting to delay the process in the hope that the issue will fade with the passage of time.

“The Deuba-led government and the Maoists fought against each other during the insurgency,” Prasai told Asia Democracy Chronicles. “Now, they are partners in the government. They don’t want the transitional justice process to conclude … because they themselves were involved in the conflict. Their sole motto is to settle the process by providing reparations and compensations.”

From 1996 to 2006, Nepal had a bloody Maoist insurgency that sought to topple the then monarchy and establish a communist government. Although the monarchy was eventually abolished in 2008 and Nepal was declared a federal democracy, the insurgency ended earlier — on November 21, 2006 — with the signing of the Comprehensive Peace Accord. 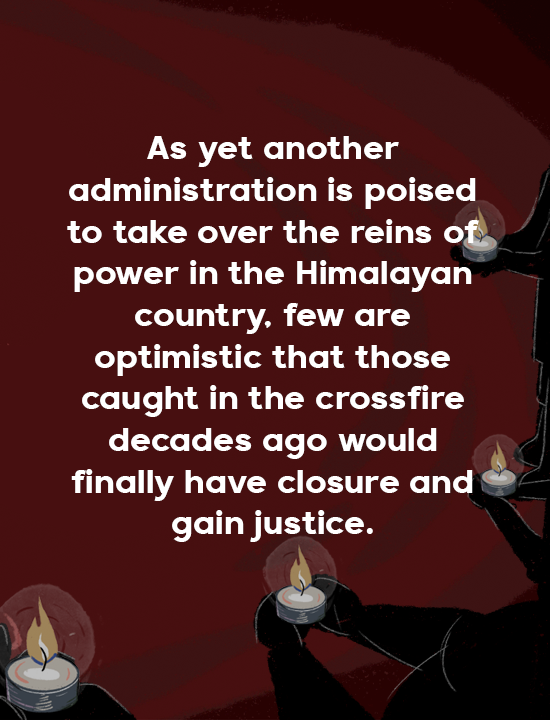 The pact brought the then-revolutionary Communist Party of Nepal or CPN (Maoist), now CPN (Maoist Centre), into mainstream politics and marked the beginning of the peace process. That process comprised three goals: integration of the Maoist combatants in the security agencies; socio-economic transfer through the constitution promulgated by the Constituent Assembly; and justice to the victims of the atrocities from the state security agencies and then revolutionaries.

One of the clauses in the accord, for instance, said that both the government and the Maoists would reveal the information about the people who disappeared or were killed during the conflict period within 60 days following the sealing of the deal. But up to now, wives like Shanta Dhakal and Man Kumari Ranjitkar are still in the dark about what happened to their husbands, while other families continue to search high and low for their missing relatives. Kumari remarks, “It seems I will die before getting to know the whereabouts of my life partner.”

The National Human Rights Commission, established in 2000, used to investigate the insurgency-era cases of atrocities until the transitional justice commissions — one on Truth and Reconciliation and the other on Investigation on Enforced Disappeared Persons — were constituted in 2015.

After investigating complaints submitted to it, the rights commission made recommendations for action in 940 cases related to the insurgency. But the then-sitting government was largely indifferent toward its findings, leading the rights commission in October 2020 to publish a list of 286 people including top officials implicated in serious rights violations, most of which were committed during the 10-year conflict period.

The National Human Rights Commission has since forwarded the complaints it had received relating to the conflict period to the respective transitional justice commissions. These two bodies, however, have not done much beyond preliminary investigation on the complaints they have received.

The Commission of Investigation on Enforced Disappeared Persons recommends actions against the perpetrators and compensation and reparations to the victims of the forced disappearances and their families. The Truth and Reconciliation Commission investigates all other types of atrocities.

So far, the truth commission has received 63,718 complaints. It has hardly conducted preliminary investigations on around 7,000 cases, although it has managed to compensate some 100 victims.

The performance of the disappearance commission is no better. It has received 3,223 complaints of enforced disappearances at the hands of state security forces and the Maoists. After a preliminary investigation, the commission has identified 2,484 cases as genuine, although the International Committee of the Red Cross says 1,333 people are still missing in connection with the armed conflict.

An Act in need of amendment

In the view of rights defenders and conflict victims, the appointment of the chairpersons and members in both commissions via a broader consultation with the stakeholders could renew hope among the victims for justice. At the same time, they want an amendment to the Enforced Disappearances Enquiry, Truth and Reconciliation Commission Act, 2014.

On July 15, the law ministry registered an amendment bill to the Act in the House of Representatives. But the amendment bill landed in controversy as it retained the amnesty provisions the Supreme Court had directed to amend.

For sure, the bill said that “cruel murder” or murder after torture, rape, enforced disappearances and inhumane or cruel torture committed against unarmed or ordinary people during the insurgency are serious human rights violations and non-amnestiable. But different quarters hit the decision to list only cruel murder as non-amnestiable, arguing that it provides a loophole to define all sorts of murders from the insurgency as “non-cruel” and therefore qualified for amnesty.

Missing from the bill as well were war crimes and crimes against humanity under serious human rights violations. It also left the issue of the former minor combatants out of the ambit of the transitional justice process.

The term of the House of Representatives came to an end in the wake of the Nov. 20 polls, and before the law ministry could find meeting points on the controversial issues.

“The bill had a progressive realization toward providing justice to the victims keeping truth-seeking at topmost priority,” said Law and Justice Minister Govinda Sharma Bandi. “I agree there were some genuine concerns of the victims on the bill. However, had the bill got endorsed, it would have helped to bring the derailed transitional justice process on track.”

The victims and rights activists disagree. They say that the bill was prepared with a hidden interest to shield the perpetrators. It was driven by a larger intention to avoid prosecution and provide amnesty even in the cases of violations of human rights, they add. In a letter addressed to U.N. Secretary-General António Guterres and sent through the U.N. Resident Coordinator in Kathmandu in late August, a group of conflict victims and rights advocates wrote that the bill “is designed to provide de facto immunity to perpetrators of both sides (Maoists and state security personnel).”

“We had high hopes that the Act would get amended in line with the Supreme Court verdict and international principle under Minister Bandi,” Geeta Rasaili, vice-chairperson of Conflict Victims National Women’s Network tells ADC. But now, she says, “we are losing hope that we will ever get justice. We have already lost our 16 years in the fight for justice.”

“The parties must know they cannot escape without providing justice to the victims,” says Kapil Shrestha, a former member of the National Human Rights Commission. “Transitional justice is (an) issue of international jurisdiction and if Nepal cannot deliver justice it will get internationalized. The sooner the parties realize the fact, the better for them and the country.”

He says that amending the Act should be the first priority of the parliament to be elected through the recent elections and that the new government should immediately start filling the vacant positions of the chairpersons and the members of the transitional justice commissions — and in a transparent manner.

“It has already been too late to expedite the transitional justice process,” Shrestha says. “The new government doesn’t have the leverage to further delay the process.” ●

Shuvam Dhungana is a reporter covering human rights, criminal justice, and social affairs. He has written for a number of mainstream media outfits in Nepal, including The Kathmandu Post, The Record Nepal, The Himalayan Times, and myRepublica.