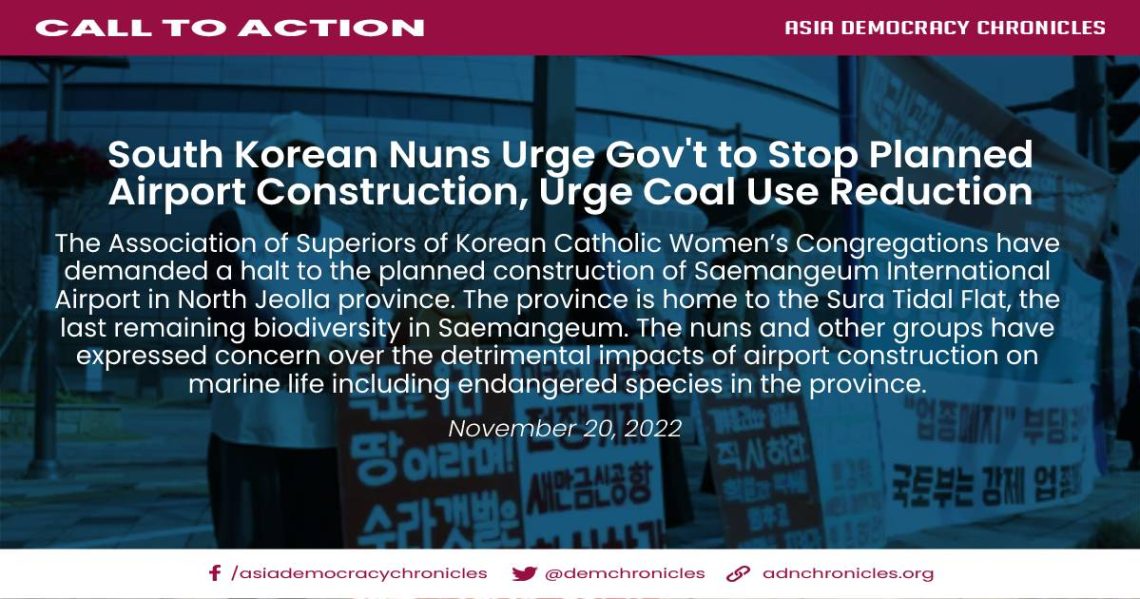 Catholic nuns in South Korea marched on the streets and called for halting an upcoming airport, besides the reduction of coal consumption to save the environment in the region.

The Association of Superiors of Korean Catholic Women’s Congregations organized an environmental campaign on Nov. 11-14 at Sejong City to press home for their demands, Catholic Times of Korea reported on Nov. 17.

Sejong is a special self-governing city and the de facto administrative capital of South Korea.

“Look at the living beings in the Sura tidal flat and listen to their cries. We will stand in solidarity with you until the end through action,” said Sister Sang-Yeon Jan, chairperson of the Justice, Peace, and the Integrity of Creation (JPIC).

A tidal flat is a muddy surface bordering the seashores or rivers supporting the ecosystem consisting of birds, fishes, and vegetation. They are also instrumental in preventing coastal erosion.

About 40 Sister Superiors from 17 religious orders participated in the campaign, accompanied by Father Kang Seung-soo, head of the Ecological Environment Committee in Daejeon Diocese, and Salesian Father Park Seong-jae.

On the final day of the campaign, the nuns joined demonstrations, picketing, and a public Mass conducted at the rear gate of the Sejong City Environment Ministry and the government complex.

During the Mass, Father Kang Seung-soo said that the campaigners were “publicizing the path of life that God desires through [their] actions.”

One of the campaigners, Sister Moon Ji-hye, took to the streets after she observed that the government policies were only focused on economic development and not environmental protection.

“I felt the need for conversion when I saw the policies focused on unstoppable development and economic growth,” said Sister Moon.

One of the major concerns raised by the group was the construction of the Saemangeum International Airport in North Jeolla province which consists of the Sura tidal flat and is one of the 10 new airports approved for construction across the East Asian nation.

Saemangeum city is located on 400 square kilometers of land reclaimed from the sea. The area is home to the world’s longest seawall at 33.9km.

Construction is expected to begin in 2023 and to complete by the end of 2027. It is poised to be commissioned for operation in 2028.

The campaigners held up placards with the words ‘Ministry of Land, Infrastructure and Environment, face climate collapse,’ and ‘Sura Tidal Flat is alive. Stop genocide and exploitation, protect lives’ during the demonstration.

The campaigners also demonstrated near the coal-powered thermal power plants concentrated on the west coast, such as Dangjin, Taean, and Boryeong, to perform a dance wishing for peace.

Members of the group and environmentalists consider coal-based thermal power plants as the main culprit of the climate crisis that emits greenhouse gases during their operation.

The last stop for the campaigners was at the Sura Tidal Flat, the planned site for the new Saemangeum Airport where they prayed for all life living in the Tidal Flat.

Climate experts fear that the hyped goal of carbon neutrality by 2050 is impossible without curbing the growing demand for civil aviation across the globe.

Bangladesh-India ties are deep, but are they comfortable, asks Ali Riaz