Like millions of other students worldwide, schoolchildren in India are trying to get adjusted again to learning in class.

ore than a year after schools began reopening across India, teachers and students alike are still struggling with a learning crisis that may last for years to come. Evident especially in government and low-cost private schools and in underdeveloped states such as Bihar, Jharkhand, and Uttar Pradesh, the crisis is multifaceted, with problems ranging from social issues to learning gaps.

Chanchala Tiwari, a teacher at the state-run Tapsi Singh High School in the eastern state of Bihar, says, “Schools were shut down during the COVID-induced lockdowns. Current ninth graders have missed school for over two years. Private schools had better access to online classes and syllabi than government ones. In contrast, government school children had little or no access to recorded programs. Therefore Grade 9 children are at Grade 7 competency level.”

Grade 9 student Aditi Kumari admits, “The lessons of most of the subjects are challenging to understand because there is no connection between the syllabus of the last class and the present. I feel lost and find it hard to concentrate in class.”

Like other countries across the globe, India imposed lockdowns soon after the COVID-19 pandemic began in early 2020. But schools in the country remained shut even after the lockdowns were lifted and businesses reopened. And while some states allowed schools to reopen beginning in September 2021, they remained closed in others, including the capital Delhi, until early 2022.

The United Nations Children’s Fund (UNICEF) has estimated that the closure of India’s more than 1.5 million schools during the pandemic affected 247 million children in the country. In a press release posted on UNICEF’s website last January, UNICEF chief of education Robert Jenkins noted that the pandemic disruptions to global education had resulted in a “nearly insurmountable scale of loss in children’s schooling.” He added, “While the disruptions to learning must end, just reopening schools is not enough. Students need intensive support to recover lost education. Schools must also go beyond places of learning to rebuild children’s mental and physical health, social development, and nutrition.”

The World Bank has also warned that “the impact on the human capital of this generation of learners is likely to be long-lasting.”

The data currently available are already devastating. A study released in February 2021 by the Azim Premji Foundation on the effect of a full academic year lost because of the pandemic revealed an “overall loss of learning — loss (regression or forgetting) of what children had learned in the previous class as well as what they did not get an opportunity to learn in the present class.” The foundation’s researchers said that this could “lead to a cumulative loss over the years, impacting not only the academic performance of children in their school years but also their adult lives.”

Even the children themselves know that something is amiss. Recounts Shiv Kumar, founder of Teachers of Bihar and a primary-school teacher in Bihar’s Patna district: “We asked children how they were feeling about the school reopening. They were jubilant to come back. However, children had doubts. The first challenge when the schools reopened was their worry about the learning recovery. Children had fears and questions. For instance, a girl named Pallavi from fifth grade asked me, ‘Sir, we are lagging in our curriculum. How will we cope?’”

“Among primary school children, there is a huge learning gap,” says Sourav Banerjee, country director of Room to Read India, an international nonprofit working in early-grade literacy and girls’ education. “For instance, children in Grade 3 have practically missed school for two years and are clueless about what they will learn in Grade 5 — a big challenge for children.”

According to Banerjee, there are psychological issues that are difficult to pinpoint. For example, the preparation that happens before children transition to another grade is missing, affecting adaptation and coping. Pressure to learn a grade-specific curriculum that one is unprepared for makes it traumatic, he says.

The minimal or even zero interaction of students with their peers and teachers during the school closures has also apparently affected psychosocial development and learning. Chandan Srivastava, assistant professor at the Central University of South Bihar, Gaya, and advisor to the Ministry of Education, says, “Free play is crucial in children’s psychosocial development, which was lacking during the COVID-19 (pandemic), hindering language development among children.”

Educators have noticed as well that students now have even shorter attention spans. For Srivastava, children have simply lost the habit of going to school. Teacher Kumar adds, “Children became addicted to technology, like mobile phones, during school closures. So, it is challenging to make them sit in the classrooms. Moreover, they have lost interest in studies leading to absenteeism. When I enquire about the reasons for absenteeism, students have nothing to say.”

“Children suffering from shorter attention spans struggle to focus or concentrate,” says Tiwari. But the high school teacher has observed something else in older students: “High school children have behavioral issues like aggression and improper conduct. In addition, their increased access to social media during lockdowns has impacted them adversely, more for boys.”

That many of the students have lost loved ones to COVID-19 has made the situation more complicated. In households where such deaths meant the loss of the breadwinner, the children were soon put to work. Then again, the economic downturn that came with the pandemic already had many Indian children working side by side with their parents. By the time schools were reopened, many of these children were no longer interested in going back to class.

“Children, especially older ones ranging from 14 to 16 years, were forced into low-paid labor to compensate for the lost family income,” says Sanjay Kumar of Pratham, a non-profit organization working in education. “As a result, the cluster of children aged 12 to14 years (Grades 7 to 9) was where the maximum dropouts happened.”

He says that “getting these children back to school is challenging, especially since the school environment is not attractive” enough to lure them back.

“Many children didn’t feel like coming to school,” agrees Kumar. ”Some even started working on brick kilns. So the government initiated campaigns like Pravesh Utsav to encourage dropouts to rejoin the school.”

According to Kumar, teachers in Bhojpur, Bihar “did prabhat feris (early morning rounds) with dhol nagara (drums) in the villages” to encourage children to return to their classes.

Banerjee, for his part, says that many female students were pushed to early marriages during the school closures, leading to a higher number of girls not returning to class. He says, “We are seeing substantial dropouts of girls, especially in higher grades, which is stark. This is because the parents tend to withdraw children from school during financial stress in the family. Many girls have been married off because of financial pressure. Besides, in the Indian patriarchal set-up, girls are the first to be removed than boys.”

“Moreover,” says Banerjee, “there is substantial academic stress leading to dropouts among girls. For instance, girls in Grade 10 now are at the Grade 8 competency level and are unprepared for board exams. This situation has led to girls’ education taking a further backseat, widening the gender gap.”

But while teachers have been trying to help their students cope with the challenges of getting used to school again and catching up with their lessons, teaching cadres are ill-equipped to handle the diverse children’s needs in the given context while meeting the curriculum goals. Many teachers have also not been given specific training to deal with the issues that have arisen because of the closures.

According to Srivastava, though, some well-meaning teachers in Bihar decided not to focus on the curriculum initially, and instead concentrated on the readiness of children, engaging in play activities with them. But with the teachers under pressure to accomplish curriculum goals, they have understandably less time to concentrate on non-academic student concerns.

“As teachers, we expect 9th graders to behave in a particular fashion,” comments Tiwari. “But the emotional development of children had severely lagged. I think because children can’t grasp the curriculum, they are emotionally more impacted. But, we need to finish the curriculum while addressing these issues.” 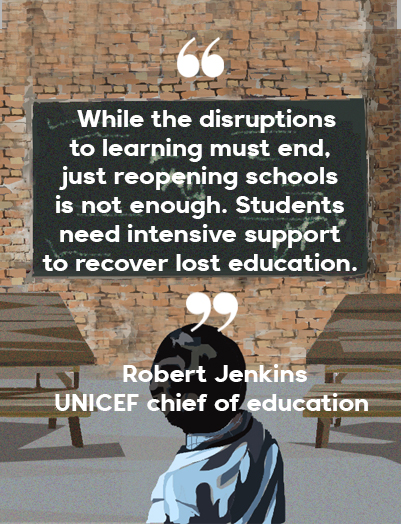 There have been fragmented efforts to address learning recovery. UNICEF education specialist Parul Sharma says, “The recovery measures like compressed syllabus and special learning packages are short-run measures helping to a limited extent. We need to invest in long-term efforts while focusing on commitments within RTE (Right to Education). The Ministry of Education has created learning content and implemented EdTech interventions to reduce the digital gap. Now, we need to invest in the standardization of digital content while addressing diverse children’s needs.”

Banerjee, meanwhile, thinks the responses are more knee-jerk than anything else.  While he acknowledges that many states have introduced bridge programs to help children, he says that “it’s difficult to bridge such a massive learning gap.”

“We are pushing the government to restructure the curriculum instead of a bridge program,” says Banerjee. “But there is a reluctance to do this. The center that designs the curriculum at the NCERT (National Council of Educational Research and Training) level needs to take cognizance of these challenges. There should be more robust communication in addressing the gender gap through community-level engagement and political leaders pushing the cause.” ●

Minakshi Dewan is a freelance researcher and author based in Gurugram, India. She possesses years of grassroots experience in women’s health, gender, and community mobilization in rural India. She is currently writing a nonfiction book with HarperCollins, India.

India objects to attempt to link farming and emissions