byPhilstar.com
in Statements
Reading Time: 3 mins read
A A
0 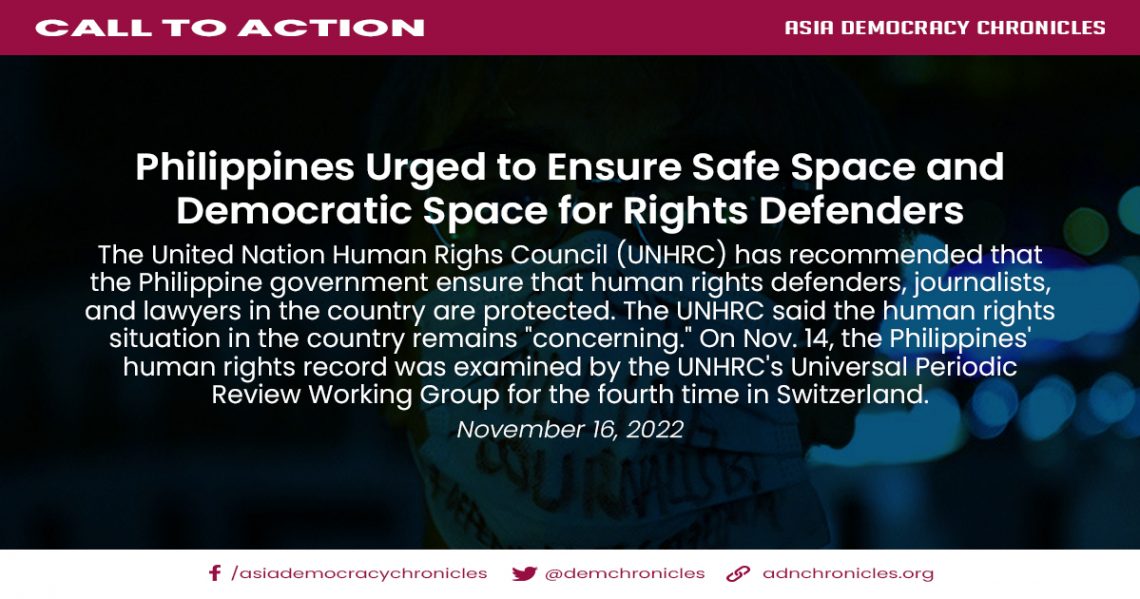 Justice Secretary Jesus Crispin “Boying” Remulla faced the UNHRC on November 14 and said in his opening statement that the Philippines “shall continue to provide accessible and welcoming venues for active and meaningful dialogue, with and amongst [civil society organizations] and human rights defenders.”

He also previously said that the practice of labeling activists, rights defenders and journalists as communist rebels and supporters is part of democracy and of freedom of expression.

Remulla headed the Philippine delegation at the fourth cycle of the Universal Periodic Review of the Philippines at the United Nations Human Rights Council in Switzerland.

Among the strongest recommendations of member-states of the UNHRC is to ensure that human rights defenders are protected.

Austria aired its concern about the “intimidation and harassment” of civil society organizations and activists “with widespread and grave human rights violations” linked to the “war on drugs.”

Austria is joined by at least 10 other countries in echoing the concern for human rights defenders in the country.

Uruguay said the Philippines may revisit “existing legal restrictions to guarantee safe space for journalists, human rights defenders to carry out their work freely and safely, free from intimidation and reprisals.”

Belgium suggested to the Philippine government to “hold accountable all perpetrators of violence against journalists, human rights defenders and citizens expressing their Freedom of Expression” and “strengthen laws” to defend them against attacks, threats and killings.

Back home and ahead of the UPR, the Commission on Human Rights renewed its call for the passage of the Human Rights Defenders Protection bill, “including an end to the practice of red-tagging of human rights defenders, activists, and other advocates.”

Remulla, in his statement, also shared with UNHRC member-states that the Philippine government completed its investigation, case build-up and filing of complaints against a high-ranking official over the killing of radio broadcaster Percy Lapid in just 17 days. The Department of Justice has set a preliminary investigation into the complaints, which could later be filed in court for trial.

A hard-hitting commentator, Lapid was killed just early in October. He was the second journalist killed since the start of the Marcos administration, following the murder of Negros Oriental broadcaster Rey Blanco in September.

Alarms were also raised that the latest killing of a journalist happened within Metro Manila, which signals the brazenness of the perpetrators of the crime.

Although Remulla noted that Lapid case investigation and subsequent uncovering of a “deeply-rooted criminal enterprise inside the corrections pillar” in the country, UNHRC member-states still recommended to the Philippines to investigate threats to journalists.

Finland recommended a thorough investigation into death threats and harassment of journalists and for the country to “ensure freedom of press is not restricted by intimidation of media.”

Austria also suggested the decriminalization of libel, especially under the Cybercrime Prevention Act, and review of the Revised Penal Code. Canada echoed this and pushed for civil proceedings instead.

The Philippines’ ranking in the World Press Freedom Index slipped nine notches to 147th among 180 countries this year, according to a report released by the Reporters Without Borders (RSF) in May this year.

The RSF cited what it described as the government’s targeted attacks and constant harassment since 2016 on journalists and media outlets that are critical of the administration.

‘We will fix what needs fixing’

Remulla, in his concluding statement, reiterated that the Philippines “is firmly committed to human rights and the rule of law for these are the cornerstones of a functioning democracy.”

“As it is in all countries, the promotion and protection of human rights is a never-ending job. We will fix what needs fixing and improve what needs improving,” he continued.

The Philippine UPR Watch, for its part, said they hoped the Marcos administration “acknowledges the fact that its claim of improved human rights situation in the Philippines is not believed.”

“Behind polite words in which the recommendations were given by more than a hundred countries in the review, they clearly mean that the Philippines has a long way to go in ensuring the human rights is respected and upheld in the country,” the group added.

They also called for stronger anti-discrimination policies against women, children and persons with disabilities, and the passage of the SOGIE (Sexual Orientation and Gender Identity and Expression) bill.#